Warriors of the Desert, seeing warfare as surviving. 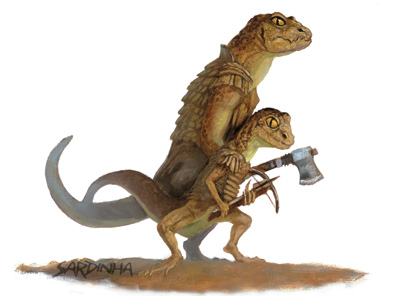 Asabis are desert dwelling reptilians, far relatives of Lizardfolk, who live freely and offer their warfare services to the best masters. Asabis are a proud warlike race, whose loyalty and bravery is famous worldwide. Asabi divide in Standard ones and Stingtail ones.

Play an Asabi if you want... 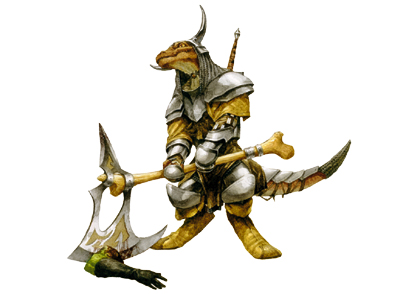 Never mistreat an asabi fighter. The arm's owner learned that the hard way. By Richard Sardinha

created by Sarrukh millenia ago to be their warriors, Asabis are reptilian humanoids resembling desert lizards, with golden slitted eyes, short but strong limbs, and scaly hide, whose colour varies bewteen brown and amber. asabi evolved in two main subspecies: Standard and Stingtail. Starndard Asabis are tall as a normal humanoid, and have a long tail that helps balance. they run in a pretty strange way. Stingtails are taller and more beastly, their tail is shorter and sports a poisonous sting. as other scaly races, thet sport sharp claws, used for borrowing.

Asabis mainly serve Sarrukh masters, and among these the most common alignment is lawful evil, even if they are not as evil as other servants. Almost all other asabis are neutral, because their warlike culture does not care about concepts like good and evil, they serve good causes with equal joy of evil causes, as long as they are well-paid and well-treated. unlike other primitive and warlike races, asabis neither take pleasure in killing and pillaging nor care about honor and glory, to them war is just a job like another, as they switch side they never bear a grudge even against their former enemies and happily fight together with them. the only exception is when they are enslaved by a brutal master, who will however face their wrath in the form of a disertion or a more direct backstab.

Asabis are greatly loyal with their allies, no matter of race or alignment, until they are not mistreat, and always try to help them. even if disgusted by the reptilian nature of an asabi, other adventurers would be able to appreciate them. asabis form strong relations of fire-forged companionship with other warlike creatures such as khaastas, tren, lizardfolk or dragonborn. khaastas however sometimes blame asabi to be weak, and dragonborn appreciate their honourable loyalty and tranquility, but dislike their uncaring about choosing a side. they do not have problems with befriending firenewts, but the seconds's cruel attitude brings to the end of the friendship in the best of cases and a duel to the death in the worst.