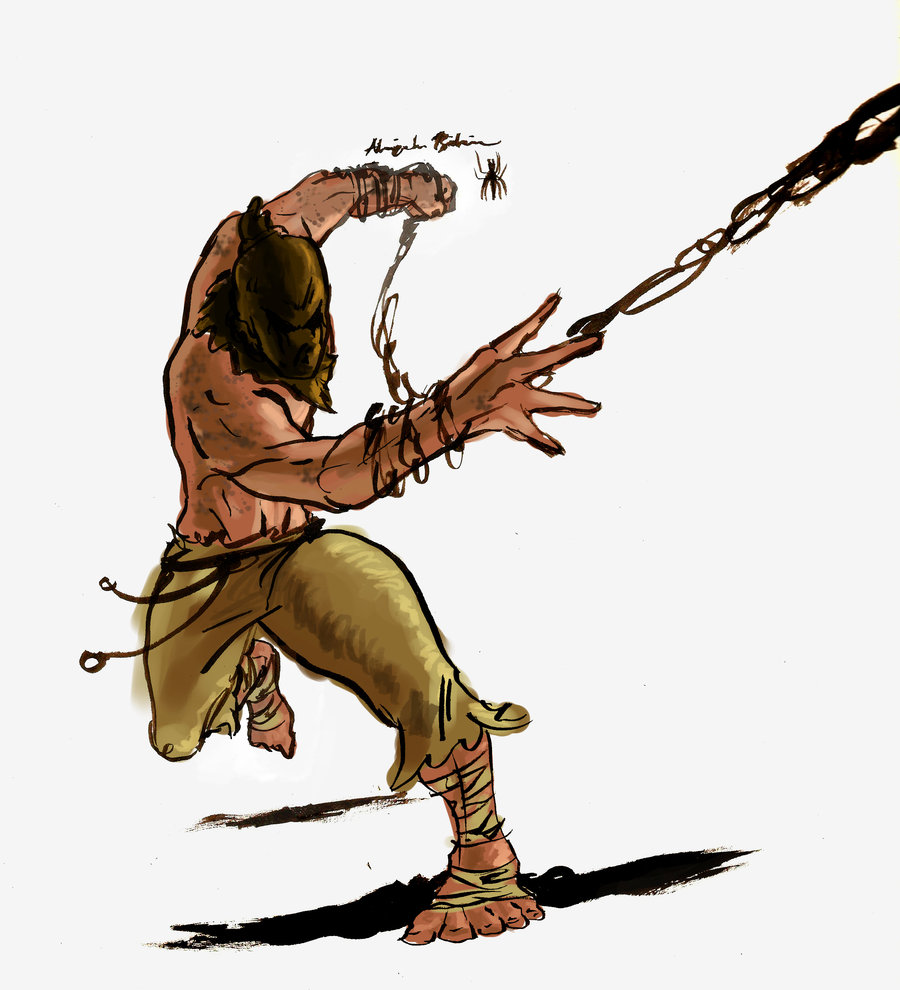 There is a secret book of arcane magic, an unnamed tome known by academics as the "labyrinthine cypher." It has been studied for centuries, with a myriad of alternate translations resulting from its exposure to varying, fallible minds. With no known practical use, the book was relegated to the safe keeping of a remote dungeon. While there, a brilliant young acolyte decoded a single page, revealing that certain esoteric rituals could grant amazing spider-powers. This is the Arachnid created!

The Arachnid has developed skills to infiltrate secret places and reach impossiple places. He uses his body to craft webs and traps to catch his foes.

Abilities: Most of the Arachnid's abilities are based on Strength and dexterity.

Races: All races can be a Arachnid, but the Human might be the easiest.

Starting Age: "Moderate" or "As fighter"

Weapon and Armor Proficiency: Arachnids may be proficient with all simple weapons plus handaxe, kama, nunchaku, quarterstaff, sai, shuriken, and siangham. Arachnids need the greatest range of movement possible and so can't use any armor or shields. When wearing armor, using a shield, or carrying a medium or heavy load, an Arachnid loses fast movement and flurry of blows abilities.

Improve Unarmed Strike: - You are considered to be armed even when unarmed that is, armed opponents to not get attacks of opportunity when you attack them when unarmed. However you still get opportunity attacks against any opponent who makes an unarmed attack on you.

Flurry of Blows: - When unarmored, as a monk may strike with a flurry of blows at the expense of accuracy. When doing so, the Arachnid may make one extra attack in a round at the highest base attack bonus, but this attack takes a -2 penalty, as does each other attack made that round. The resulting modified base attack bonuses are shown in the flurry of blows attack bonus column on the class table. This penalty applies for 1 round, so it also affects attacks of opportunity the Arachnid might make before her next action. When an arachnid reaches level 5, the penalty lessens to -1, and 9th level it disappears. An Arachnid must use a full attack action to strike with a flurry of blows.

Evasion - at 7th level and Improved Evasion at 8th level

Produce Webs (Ex) - At 3rd level, the Arachnid can produce an amount of webbing once each day equal to (Use Rope + Arachnid level) x40. The resulting number is the feet of usable webbing gained. Unused webbing may accumulate indefinitely. Any length of webbing used dissolves into nothing after 8 hours (increasing by 1 hour at levels 6, 9, 12, 15 and 18), but remains very strong until then.
- Webbing can be used for any number of purposes - rope for climbing, binding enemies, or crafting traps, just to name a few. Arachnids are encouraged to be creative with their usages, but should be aware of the limit of their web length. Appropriate checks (Craft, Use Rope, etc.) should also be done, depending on the situation. Dungeon Masters get final say on whether a certain use is allowable in any given context.
- If an enemy is bound in webbing, it can make an Escape Artist check against the Arachnid's Use Rope skill check to free itself; or the subject could try a Strength check of DC 20 + 1/2 Arachnid level + INT
- The webbing, when in use, is only sticky in places where the Arachnid wants it to be (e.g. one end only, for sticking to a ceiling). Webs cannot stick to wet, oily, or extremely hot (fiery) surfaces.
- Webbing is vulnerable to sharp objects and fire, against which it has a breaking DC of 13 + 1/2 Arachnid level + INT.

Shoot Webs (Ex) - At 3rd level, Arachnids can shoot webs a distance of 20 feet per Arachnid level, as a standard action. This can be used to affix one end of a web to an object some distance away, or it can be used as a ranged attack resulting in binding or grappling an enemy, but it does no damage upon impact, unless on a natural 20. In the case of a Critical hit, damage is equal to 1d6 + Str mod.
- Damage on a critical hit is increased to 1d8 at level 8, 1d10 at level 13, and 1d12 at level 18.
- When binding a foe, medium creature limbs require 3 feet of webbing to immobilize and another 3 feet to cover the head. Double this for every size category above medium, and halve it for every size category smaller, or modify it for differing purposes.


Tremorsense (60ft): - A creature with Tremorsense is sensitive to vibrations in the ground and can automatically pinpoint the location of anything that is in contact with the ground and within range. If no straight path exists through the ground from the creature to those that it’s sensing, then the range defines the maximum distance of the shortest indirect path. It must itself be in contact with the ground, and the creatures must be moving. As long as the other creatures are taking physical actions, including casting spells with somatic components, they’re considered moving; they don’t have to move from place to place for a creature with Tremorsense to detect them.

Extra Arms - At 4th level, the Arachnid's mutations has become more grotesque, he can grow two more arms whenever he wants. This allows him to hold two more one-handed weapons (or one more two-handed weapon) ,
- Arachnid gains a +2 attack bonus to Melee, +4 intimidate bonus and +5 attack bonus to Grapple.
- Arachnid may also use his extra arms to use webbing while fighting as one of his possible attacks (as long as he is not using a Flurry of Blows attack). Webbing can only be used effectively against opponents on whom he is focussed.
- At level 15, another set of arms grows (+4 total arms), doubling the effects given by the previous new pair of arms. However, if the Arachnid had more than four limbs to begin with, this feature cannot allow more than eight limbs in all.
- Growing extra arms takes a full round.

Hide in Plain Sight - While in any sort of natural terrain the Arachnid can use the Hide skill even while observed.

Camouflage - You can apply your Hide skill to objects or even other creatures as a standard action. Often this requires arranging scenery to provide superior concealment. All normal Hide modifiers, including size, apply. A creature hidden in this manner cannot move about without breaking concealment.

Blindfight - In melee, every time you miss because of concealment, you can reroll the miss chance percentile roll one time to see if you actually hit

Paralyzing Strike (Ex) - At level 5th, Arachnid's strikes gain a paralyzing effect that may stack with other attacks. Usable 1/2 Arachnid level/day, the Arachnid may call one unarmed strike (but not in Flurry of Blows) or grapple attack to be a Paralyzing Strike! This must be called before the attack roll is made. If it misses, he may not try again until the next round. If it hits, the opponent must make a Fortitude save (15 + 1/2 Arachnid level + Str) or be paralyzed for 1d4 rounds.

Improved Uncanny Dodge - An Arachnid of 10th level or higher can no longer be flanked.

This defense denies rogues the ability to sneak attack the character by flanking her, unless the attacker has at least four more rogue levels than the target does.

Web of Life (Sp) - By level 20th, the Arachnid has attained a sense of responsibility so great that it can be made manifest in the Material Plane during times of extreme need. Once per day, if an enemy makes an attack that would normally force a Reflex save for anyone present, the Arachnid may instead cause an indestructible magic shield to form instantaneously around himself and all allies within a 30-foot radius of him. This translucent magic web is simply willed into existence and fades back into the ether after the attack ends. No harm or other evil effects can befall anyone while in this web of life.
- This is used as an immediate free action.

Religion: Arachnids are free to choose religion. Most of evil Arachnids worship Lolth.

Other Classes: Arachnids usually get along with druids and fighters. They feel uncomfortable with rogues an thiefs.

Combat: Arachnids are typical fighters and can act like supports too.

NPC Reactions: Arachnids can be very scary with extra limbs, but reactions are usually normal once his apaearence is common.