Antlion Workers are the main working force of the Antlions. They are only found in the nest, tending to Antlion Grubs and carving out more areas of the nest using their acidic spittle, which also acts as a potent neurotoxin, used for warding off intruders who stumble into the nest. Like all antlions, they are hive-minded and connected telepathically to the Antlion King. 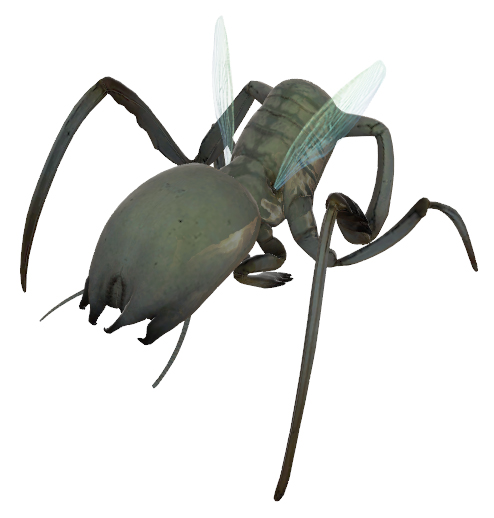 Antlion Workers are given the responsibility of watching over the Antlion Grubs while simultaneously expanding the underground complex of tunnels, called the Nest. They do so by using a highly corrosive acid that is strong enough to melt away the stone walls in which they build their caves. They use this as their primary form of attack, making them slightly more dangerous than the common Antlion Soldier.

Acid Spit (Ex) An Antlion Worker's spit is corrosive, but also contains a potent Antlion Neurotoxin. Anything that takes damage from the Antlion Worker's Spit attack is subject to the effects of the neurotoxin, which can be resisted by a successful Fortitude save, DC 16.

Acid Burst (Ex) An Antlion Worker that has reached 0 hp will burst in an explosion of corrosive acid with a range of 15ft. Anything within the blast radius takes 1d8 points of damage and is subject to the effects of Antlion Neurotoxin, Reflex save DC 16 for half damage and no effect from the Neurotoxin.

Fly (Ex) Once per round, instead of taking any other action, an antlion worker can jump to any spot within line of site. This ability is not limited by distance. The antlion worker cannot jump more than 50 ft vertically.

Weaknesses (Flaw) An Antlion Worker has a weak underbelly. If attacked on the underside, the armor class is treated as 12. Antlion Workers can be flipped by a burst from the 0 Point Energy Feild Manipulator, exposing their undersides and rendering them Helpless for 1 round, after which they get back up. Any Antlion that submerges itself in water cannot stay up. Left alone, the antlion will drown in 1d4-1 rounds unless it escapes the water. An Antlion Worker that dies in this manner does not burst.

Thumper Avoidance (Flaw) Antlions use their senses to feel vibrations on objects. This can be turned against them using a Thumper. Any Antlion within the effective radius of a Thumper should be treated as Blinded, Nauseated, and Panicked. These effects only last for as long as the antlion is within the radius of the thumper.