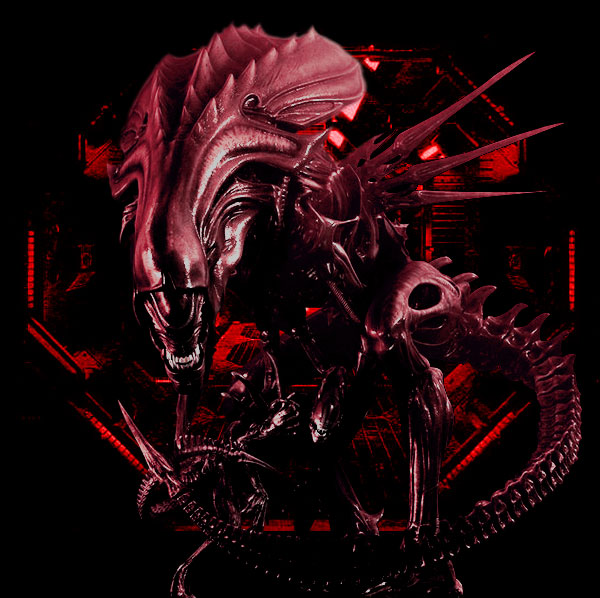 The Alien Queen, with an Alien Warrior next to her for scale.

When you enter the foggy cavern, you find a strange sight. A grotesque creature of black onyx, standing at least 20 feet tall, hovers in a network of what might be considered webs. Its rear end is attached to a yellowish sack that churning out these halfling-sized hot cross buns you see across the cavern, every ten minutes or so. It seems asleep.

Encountering an alien queen is no light undertaking. Though physically sluggish at first, they can summon members of their hive to defend them with far-ranging telepathy. If an alien queen's opponent proves to be more than a match for its children or focuses their attacks solely on the alien queen, it can detach from the egg sack and engage in melee--a very frightening proposition.

Stream-lined (Ex): A xenomorph has a +10 racial bonus to Swim, Balance, Climb, and Jump checks due to its aerodynamic exoskeleton.

Improved Grab (Ex): To use this ability, the alien queen must hit with 2 successful major claw attacks. It can then attempt to start a grapple as a free action without provoking an attack of opportunity. If it wins, it establishes a hold and may attack with its extending mouth or perform a rake attack with its two minor claws.

Minor Claw (Ex): Two vestigial appendages sit between the alien queen's upper arms and bear claws that deal damage as if two sizes smaller than normal(1d6). These minor claws can only be used during a rake.

Fling (Ex): As a Full-Round Action and after a successful grapple on a single target one or more size categories smaller, the Queen may throw a grappled opponent or an improvised weapon at twice its range increment, adding twice his Strength modifier to his damage roll.

Telepathy (Su): The alien queen can issue telepathic commands to all xenomorphs she has spawned on the planet which she currently nests. When on a plane other than the Material Plane, the range of this ability is reduced to 500 feet.

Egg Sac (Ex): This membranous sack contains unhatched Facehugger eggs. The alien queen is attached to one of these while in her lair, and it prevents any movement. It has a hardness of 5 and has 40 hit points. The egg sac can be detached by the alien queen in two full-round actions, allowing her normal movement of 80 ft. When the alien queen finds a suitable lair, a new egg sac will grow in 3d8 weeks. The egg sac is required to use the Lay Eggs ability.

Lay Eggs (Ex): Once every 10 rounds as a full round action, the alien queen may lay a Facehugger egg that hatches when ordered to by the alien queen. Ordering the egg to hatch is a free action.