A fanatical Child Of Winter-wannabe druid makes her home in the Nightwood of Karrnath, deep in an abandoned mineshaft come natural cavern. She targets frontier towns, poisoning the local populations and driving them away. If she can't achieve it subtly, she attacks in the night with her monstrous spider pets, and her dire rat animal companion. Can the players stop her from terrorizing the villages and growing in power?

The surrounding area is damp in the summer and boggy, muddy and marshy in the winter. Trees twist and choke the entrance the shaft and a small waterfall runs over the lip into the darkness below. The druid broods and plots the downfall of civilization, starting small.

"Eerily four villages, similar to yours within my realm of influence, has been poisoned in the last four weeks, killing all men, women and children. My sources tell me that in every instance the town well was poisoned. The culprit has slipped up this time and left tracks that one of my rangers spotted leading into the Nightwood nearby. I must warn you that I believe that is a dangerous druid residing within the Nightwood. I have asked the ranger and other local allies to warn towns in the area of the current danger. I need you to follow the tracks, investigate and bring this force to justice. You shall gain my favor by the state for your work. Do whatever you must.”

The tracks have led you several miles into the Nightwood. Half a day's march from the little village, you stand in a swathe of swampy marshland. The path becomes wet, black mud that grabs at your feet and the gnats in the air seem particularly hungry for your blood. A persistent misty drizzle engulf the area, soaking your hair and clothes to your skin. A little further into the thickets you find what you're looking for. Vines and long grass choke the mouth of a fifty foot deep, square mineshaft in the ground. Bits of bracing timber jut out from the sides of the pit, hanging above the darkness below and a tiny trickle of water falls over the edge of the shaft. There are some simple vine traps surrounding the site, and small pits dug into the ground, that are non-threatening to heroes but would discourage a common person from venturing further. However, there is a line of string running around the mine that, when touched, rings wooden chimes inside the mine alerting the druid to an intruder's presence.

From inside the pit all you can see above you is the canopy of the Nightwood and slivers of dull grey sky. A few roots poke out of the muddy walls and crawl into the waterlogged pit floor. Ahead of you is a murky tunnel about 6 feet high with wooden pillars bracing the entrance before you.

The tunnel opens up into a chamber hewn roughly from solid rock. Moss covers the slick floor and walls and some large tree roots force their way through the bedrock that makes up the ceiling. Clusters of cobwebs fill the dark corners of the room and more thick webbing hangs in the air. There are bones, humanoid, in the silken webbing as well as some small metal trinkets and rusty weapons. At the rear of the room is the vertical shaft to the next area. Two monstrous spiders hide in the shadows waiting to flank and attack. (Spot DC 26) If the PCs don't spot the spiders read;

You feel the hairs on the back of your neck stand straight as you brush past something hairy and moving. Before you can react, a black, hairy spider the size of a child pounces from underneath a silk cocoon and prepares to sink its poison coated fangs deep into your legs!

Another pit, narrower than previous reaches away into the darkness below you. A somewhat cool breeze blows up from the depths, and the sound of running water echoes off the well chiselled walls. Most of some kind of metal mechanism has been torn from it's anchor in the rock and discarded long ago. Rusted iron girders brace the shaft walls at regular intervals. Used as a shaft to load and unload rubble from the mine, it has long out-served its purpose. Abandoned and vandalised by the druid, it is still climbable, otherwise the druid would be stuck.

The walls of this mine shaft have various glowing fungi throwing shimmering light off the moist rocky walls. Three fungi lit tunnels go off in different directions, one apparently blocked by thick branches wedged solidly between the floor and the uneven ceiling. Removing the wooden sticks causes heavy rubble to fall from the ceiling (1d6, Reflex save DC 15 halves damage). It is up to the players to figure out how they can safely get past. Two shafts meet up, one is a dead end.

Roots of all sizes, some as thick as your arm, others clustered like greasy wet hair begin to gradually crowd the passage ahead. Walking is tough on the soft, slippery plant roots. A thick mist creeps low to the ground, blown into swirls and eddies by a cool, light breeze from somewhere deep in the mineshaft. The glowing fungi support some weak leafy vines that carpet the walls and rocks overhead.

As you stumble along the root infested passage, the maze of tubers below the mist trails hiding your feet seems spongier than before. A successful DC 15 Spot check will uncover that below the mist and roots is a 10ftx10ft mine pit. A successful Balance check (DC 13) will guide players safely across the edge of the pit. If the PCs do not notice the trap, read the passage below;

The floor falls away beneath your feet! You slide through the undergrowth and begin falling before coming to a muddy splash in a water filled pit. Each round the player(s) in the pit must make a Swim check (DC 10+1/2 armor penalty) to stay afloat or sink into the murk (Swim DC 12 to resurface, +2 each subsequent round). A rope or tuber roots from the floor are strong enough to aid in hauling a player out if they succeed a DC 15 strength roll. Without assistance, a creature may climb out by succeeding on a DC 18 climb check

At the end of this passage way, the roots on the floor become more sparse but the vines covering the walls seem thicker still. A fresh breeze gives respite to the humidity thrown up by the vegetation. Ahead of you, lit by green luminescent fungi, a harsh tangle of roots and greenery blocks your path. The woody blockage can be broken down with a strength check or attacked away with a few swings of a weapon, however this gives the druid inside a chance to prepare and hide from the intruders.

This room immediately strikes you as unusual; the walls are covered with a heavy, dark wood, as if somebody had smeared it onto the rock beneath. Here and there, jagged spikes of grey stone poke through the wood. Twisted bushes and plants line the walls and someone's leafy bed still lies next to a dead fire. The area at the back of the cavern is raised about 4 feet and some black stalagmites reach surface-ward through the wooden floor. An angry female voice beckons from somewhere at the rear of the room; “For what reason do you trespass my home?” The druid attempts to intimidate the players into leaving of their own accord. If they do not leave, the druid casts faerie fire on the strongest looking PC then casts obscuring mist on herself and begins slinging stones at the outlined PC until they move out of the mist. The druid will not be cornered; if the PCs attempt to reach her location, she moves to meet them, sending her animal companion ahead to draw their attention.

When the druid dies, the wood coating the rocks retreats back through the roots.

The druid gasps and lies motionless on the ground in a pool of blood. Her clothes are hand stitched from the black hide of some beast. The dark wood that coats the room creaks, cracks and warps beginning to recede, starting underneath the druid's body. It seems to flow and shrink into the bushes and roots that line the room, revealing the featureless, wet, roughly hewn rock of the mine. As the twisted wooden wall retreats, another passageway is revealed at the far end of the cavern.

This small alcove is surprisingly dry and is stuffed with items brought back from the druid's jaunts into the towns and cities. Most of it is junk, chairs and stools warped by druidic magic, a couple of everbright lanterns and the odd wood carving. Hidden behind this is a rather wild looking chest of sorts, with random branches and twigs still growing out from it.

Inside the chest is a small collection of roughly cut gemstones, a couple of platinum pieces and a silver goblet. There is also a collection of rolled up scrolls stuffed into a single leather scroll case.

Upon the only legible scroll is written a message in elegant but wicked looking handwriting, accompanied by a rough map;

“Val'tash, I read about your accomplishments in these abhorrent frontier towns with delight. My messenger has delivered the materials you requested to the designated meeting spot. As usual, my activities in Korth require that I am not seen communicating with the Children of Winter directly. Our time is coming, Child, have hope. A new dawn is coming, the natural order shall be restored and the heretic destructivism of this loathsome 'civilization' is coming to an end. Until next moonrise,

This is open-ended. Is Skagg'tarath a fellow Child of Winter? Does he simply have interests against Karrnath and simply using the druid as a puppet? Perhaps he was wronged in the Last War by the people of Karrnath and seeks revenge. Is the druid even dead? If the PCs did not reduce her hit points to -10 (or at DM's discretion) she could become a recurring villain, gaining levels alongside the PCs. 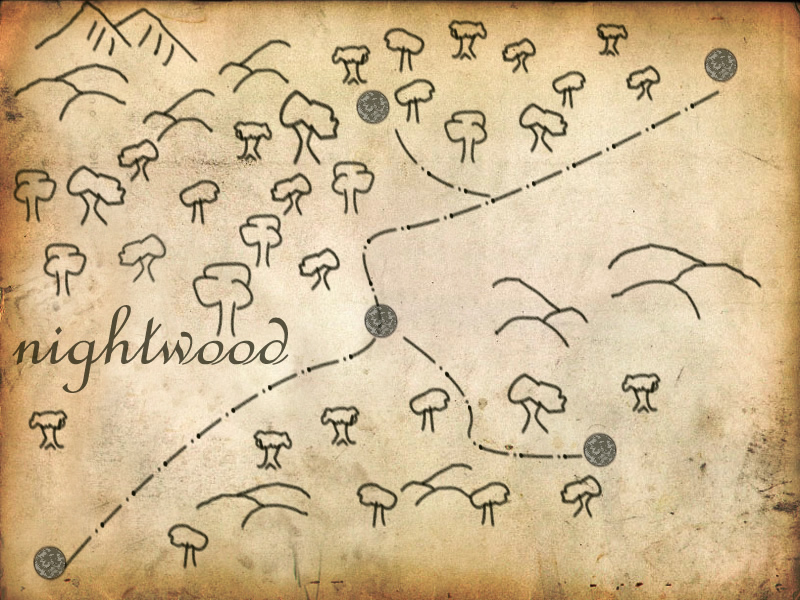 This includes some (unnamed) frontier towns, the main road and the Nightwood 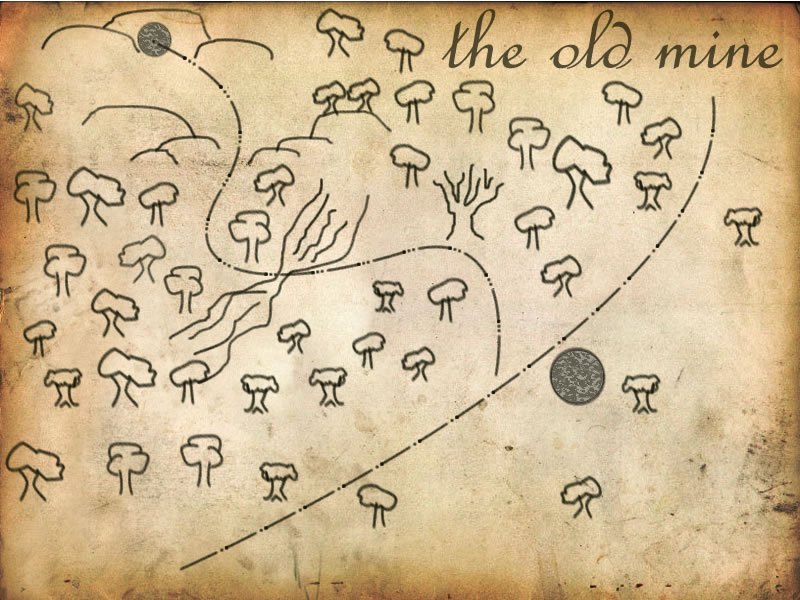 How to get to the mine

Optional player's map showing how to get to the mine. Includes three landmarks: Giant Dead Tree, Ford In The River, Two Tree Hill 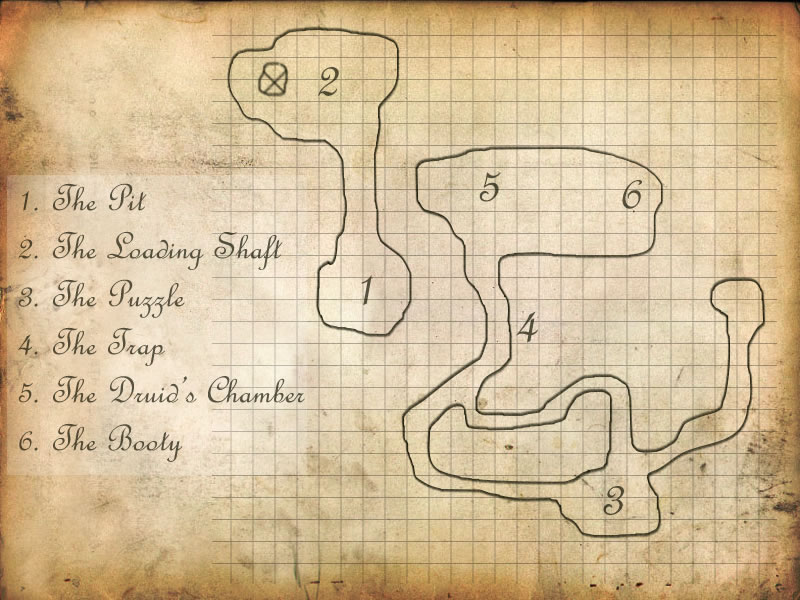 Basic layout of the dungeon