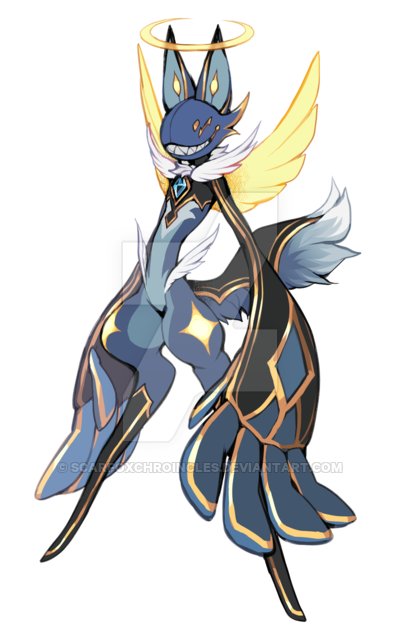 These curious creatures have a very peculiar shape, starting with their obvious canine morphology. They tend to be related to foxes more than with other kinds of canines, hence a part of their name comes from. Having an oval head with no apparent nose, they can be distinguished by clear features such as wide mouths that take perhaps 40% to 50% of their head. They have large eyes which seem to be constantly closed but are actually open, letting it be known that they really need a very small fraction of the range of vision to see. Their arms look like scarves. Their legs are bent back and allow for very fast bursts of movement like a cheetah. They like to dress with extra accessories to display their superficial superiority to others of their kind. This often accentuates their galaxy-like fur, which can glow.

The earliest recorded history of the scarfoxes dates back to the tale of a king name Jefkar. He solicited the services of a scarfox named Jester, who promised him the defeat of his neighbouring kingdoms. Initially, the scarfox's promise held true, until the final decisive battle, when Jester betrayed the king. It turns out he was a double agent all along for his enemies and Jefkar died in battle cursing Jester with his last breath. This tale serves to uphold the common stereotype of scarfoxes as traitorous pranksters who owe little to no loyalty to their lands or rulers. It is unclear if this is true for their own as well. Regardless, history is dotted with instances of scarfoxes playing political roles to incite war and mischief. Eventually, this has led to prejudice against them that remains to this day. Kingdoms will often persecute them as scapegoats if necessary.

Since their reputation means them ill, scarfoxes are entirely nomadic. They travel in small family units from city to city, selling their services as entertainers usually. Their greatest art, in addition to their penchant for lies and treachery, is storytelling. Scarfoxes live an unnaturally long lifespan of nearly 4 centuries, allowing them to observe many events. They pass these along to their children in the oral tradition of stories. Their longevity has contributed to a rather colorful culture, with bits and pieces taken from old kingdoms and fallen reigns of past empires they incorporated. This heavily depends on their area of travel, so. usually, no two scarfox families will have the same culture.

The names of the scarfoxes generally have no gender. They are heavily reliant on borrowed syllables and conventions from ancient languages, like Primordial dialects.

Fox-like creatures with long, scaref-like arms
Ability Score Increase. Your Wisdom score increases by 2 and your Intelligence score increases by 1.
Age. Scarfoxes generally live between 3 to 4 centuries old.
Alignment. Their alignment is generally based on your own interest and benefit, being considered both chaotic neutral and good.
Size. They generally stand around 6-8 feet tall on average, with an arm span to match. Your size is Medium.
Speed. Your base walking speed is 30 feet.
Fey Being. Scarfoxes are believed to be whimsical beings from the Feywild. Your creature type is fey instead of humanoid.
Fey Ancestry. You have advantage on saving throws against being charmed, and magic can't put you to sleep.
Starry Glow. As a bonus action, you emit bright light from your fur for up to 30 feet. You can end this effect with a bonus action.
Speech of Beasts. You have the ability to communicate in a limited manner with beasts. They can understand the meaning of your words, though you have no special ability to understand them in return. You have advantage on all Charisma checks you make to influence them.
Innate Prankster. You are proficient with the Deception skill.
Languages. You can speak, read, and write Common and Primordial.