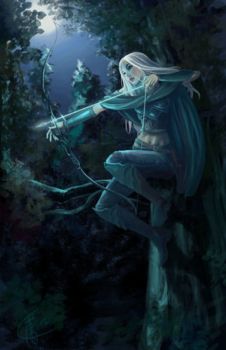 Phase Spiders are a cause for caution when traveling in places that they are rumored to hunt. Unfortunately, travelers who are not gifted with uncanny perceptive abilities literally walk into the clutches of the Phase Spider's web. Only but a moment after unwary prey has walked into its trap, the Phase Spider returns from the ethereal plane to bite its victim. With the inability to move, the victim is rendered helpless to the extra-dimensional venom that the Phase Spider injects. Rare is the day that an adventurer who has wandered into the web of a Phase Spider, escapes in time, and it is even rarer that the individual survives the venom while in the web. Curiously, all of the existing ethereal hunters were once rangers; perhaps it is because of the ranger's natural calm or their knowledge of nature and how to survive. Those who survive the web and get away without the bite become more cautious about their surroundings whereas those who survive the venom become something more. They are gifted with the extraordinary ability to Phase Shift between the Material Plane and the Ethereal Plane. With this amazing feat comes a curse of sorts. The poison that a Phase Spider injects into its victims weakens them and no mater the treatment, the victim never fully recovers.

An ethereal hunter is gifted with the ability to shift between the Material Plane and the Ethereal Plane. Consequentially, an ethereal hunter can disappear from one spot and reappear in another to surprise an opponent. They can be the key to a winning battle...or to diffusing a dangerous conversation by slipping their blade around an unsuspecting enemy after reappearing a foot behind them.

The poison that once threatened their life was treated as best as possible, but the damage was done nonetheless. The biggest weakness that an ethereal hunter has is likely its drastically reduced Constitution. The poison of a Phase Spider must be kept in the blood for the ethereal hunter to use their extraordinary ability. The ethereal hunter's body eventually blends with the poison allowing them to naturally recover the lost Constitution, but they never fully heal.

An ethereal hunter is very valuable to a party because of their extraordinary ability to shift to the Ethereal Plane at will. Strategies built to this ability put them as both excellent flanking partners and flawless scouts. They interact with their party members just like they used to as rangers. The only exception being that if the ethereal hunter is male then they generally have to gain the trust of female characters in the party. (The Ethereal Plane can see into the Material Plane.)

Races: Because the ethereal hunter was once a ranger, they have the same race description as a regular ranger. "Elves often choose the ranger’s path. They are at home in the woods, and they have the grace to move stealthily. Half-elves who feel their elf parents’ connection to the woods are also likely to adopt this class. Humans are often rangers as well, being adaptable enough to learn their way around the woods even if it doesn’t come naturally to them. Halforcs may find the life of a ranger more comfortable than life among cruel and taunting humans (or orcs). Gnome rangers are more common than gnome fighters, but still they tend to remain in their own lands rather than adventure among “the big people.” Dwarf rangers are rare, but they can be quite effective. Instead of living in the surface wilderness, they are at home in the endless caverns beneath the earth. Here they hunt down and destroy the enemies of dwarvenkind with the relentless precision for which dwarves are known. Dwarf rangers are often known as cavers. Halfling rangers are highly respected for their ability to help communities of halflings prosper as they pursue their nomadic lifestyle. Among the savage humanoids, only gnolls are commonly rangers,using their skills to slyly stalk their prey." - Player's Handbook p.46-47

Alignment: Any, but they tend to be more chaotic than rangers.

Starting Gold: 5d4x10 gp (200gp). (Ethereal Hunters can potentially be expert thieves because of their ability.)

Starting Age: As Ranger or Moderate

All of the following are class features of the ethereal hunter.

Weapon and Armor Proficiency: An ethereal hunter is proficient with all simple and martial weapons, and with light armor and shields (except tower shields).

Track: An ethereal hunter gains Track as a bonus feat.

Endurance: An ethereal hunter gains Endurance as a bonus feat at 3rd level.

Spells: As ranger and from the ranger spell list.

As ranger, but they do not lose their extraordinary abilities.

Epic Immunity Mutation: This ability functions exactly the same as Immunity Mutation. Acid resistance and bonuses to saves against poison continue to rise by +5 for every level divisible by 5 that the ethereal hunter gains.

Other Classes: As Ranger.

Combat: As Ranger. Additionally, because of their Phase Shift and Ethereal Swiftness abilities, ethereal hunters are exceptional at flanking enemies and catching them flat-footed. Most ethereal hunters prefer to kill from a distance if possible but they don't mind getting their hands bloody if they have to.

Ethereal Hunters in the World[edit]

Ethereal Hunters are masters of infiltration, easily rivaling a rogue. Short of a trans-Plane barrier nothing can keep them out. Combined with their tracking abilities an ethereal hunter is also the perfect bounty hunter. Ethereal Hunters are extremely rare to come across in Faerûn, mostly because an unwary adventurer rarely escapes a Phase Spider before the poison kills him.

Daily Life: They act similar to rangers with the exception that they take on a wider variety of jobs. Ethereal Hunters are not recognized straight away; it is only after disappearing before an enemies eyes that they are known. That and they like to change their eye color every few seconds in a conversation to get a surprising effect.

Notables: Ethereal Hunters don't like to stay known or to be recognized but one particular ethereal hunter watches over The High Forest in northern Faerûn. She is not known by her real name but people call her, Sargt di Caesin or "Guardian of Nature" when translated from Draconic.

Organizations: Ethereal Hunters rarely run into one another, but when they do, they tell of the tales they've experienced over their immortal life. If one of them is new to being an ethereal hunter, the experienced one usually shares his wisdom with the novice. There aren't enough ethereal hunters to form an organization, guild, or clan. There has never been an ethereal hunter who forgot the pain that the Phase Spider's poison caused them, and because of this, they strive to help those in need.

Characters with ranks in the appropriate skills can research ethereal hunters to learn more about them. When a character makes a skill check, read or paraphrase the following, including information from lower DCs.

Ethereal Hunters in the Game[edit]

Adaptation: The ethereal hunter is a variation of the ranger.

Sample Encounter: Night falls on the Castle of Dedremor. The changing of the guard happened only an hour ago. Narrssuras eyed the guards in the towers of the wall and counted eight in all. It would be difficult but he thought he could take them without giving himself away. "Nera, I want you to make sure the guard next to the bell rope, the one who will set off the alarm, is taken care of. Do you understand?" Narrssuras's black panther companion brushed his hand and mind purring, "Yesss". Narrssuras and Nera vanished from the Material Plane. Seconds later, the sound of eight armored figures falling to the ground could be heard. With the stealth of felines, Narrssuras and Nera shot toward the castle. They did not bother to knock out the two guards standing watch by the entrance but instead passed through the walls in the Ethereal Plane. Minutes passed until Nera purred into Narrssuras's mind, "Herrre." In utter silence, the two appeared in a dark room warmed by the embers of the fireplace. As they approached the bed where their bounty lay they heard a voice strike out in the darkness, "I wondered when you would finally come after me." A torch burst into blazing life in the corner and it became apparent to Narrssuras that the dark room had been an ambush. With some lighting, they both would have seen the half-dozen guards and their bounty surrounding them, but even if they had entered by normal means they would have smelled them. Now, fully outnumbered, Narrssuras thought up a plan with Nera. Only a moment after they had appeared they vanished once again and just as the guards on the wall, they knocked out the six here as well. Alone and gravely regretting not hiring a wizard, their bounty stood at their mercy. Without a second thought, Narrssuras vanished before his bounty fell unconscious to the floor. "Gods, I hope I'm paid well for this..." Narrssuras picked up his bounty and left the castle, Nera taking out every guard they came across. Daybreak came and Narrssuras heard the words, "We are gathered here today, to witness the union..." before disappearing into the Ethereal Plane with Nera and a large sum of gold coins.