This race first appeared in the Official D&D Supplement in the Gazetteer 10, GAZ 10 in 1989 by Bruce Heard and is adapted to fit 5e. 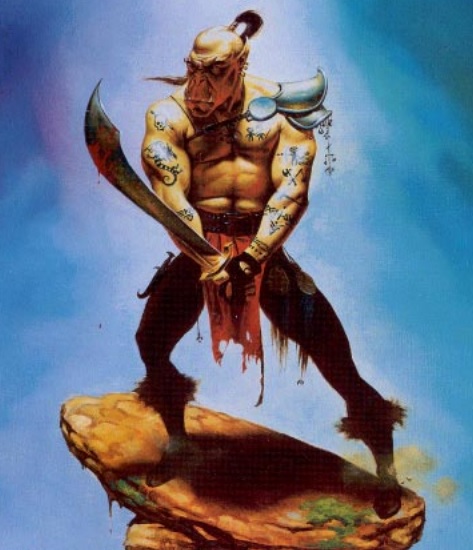 Art by Fred Fields From TSR9489

Yellow Orcs are discernable by their thick dull yellow hides. With rat-like faces, and about the size of a human, with pointed ears, and a lack of tusks. There are clans that favor very short hair, and others that favor long hair, but always they will have some hair pulled into a top knop, with usually an ornately carved bone stuck through to hold it all together. Favor ornate lamellar wooden and bone scaled armors, that are just as sturdy, but lighter than conventional scaled armors. And full helms with grotesque faces, and plumes of braided wolf hair.

In some prior ancient age, these Orcs either diverged from their green Common Orc cousins or were created separately by whatever divine force made them in the first place. Yellow Orcish storytellers almost always say that they were created separately, but scientist wizards that have observed the society of the Yellow Orcs think they are somehow related to their greener cousins. Because of their rat-like faces, it is believed that Yellow Orcs may be a demi-race of Common Orcs and some other extinct Ratfolk race that somehow had more peaceful and less chaotic values.

Nomads of vast steppes or arid places, they herd livestock of all types and primary eat meat or dairy. Most Yellow Orcs will have some animal husbandry skills, depending on the clan and whether they are semi-nomadic or fully nomadic, sometimes this is with the dire wolves they ride into battle, but sometimes if semi-nomadic it is with the giant rats, yaks, or goats that they breed for meat or milk in the pot.

Being Nomadic, the horde system of the Yellow Orcs is a bit autonomous, Orcs do swear allegiance to one Chieftain, but only when called to war do they actually gather with other Orcs of the hordes and clans to fight. Their greener cousins often use Yellow Orcs as elite cavalry units, and so many Yellow Orcs are fluent in the Common Orcish language. Military service is compulsory for every able Orc, but shamans of the tribes are not required to go to war, and will usually stay behind until called upon to heal the hurt or diseased. Otherwise, they roam as nomads, in bands of small clans and families. They speak their own dialects of Yellow Orc but usually know some Common Orc, and a few trade terms in Basic Common.

Yellow Orcs are for the most part the calmest and most spiritually enlightened of the Orc sub-races, most worship Yagrai. Yellow Orcs tend toward Neutral Alignments. They will always have one shaman in the family or clan, who is able to heal or cast spells of some kind as well as tell stories. Due to their oral history, literacy is unheard of in the tribe, even the shamans and warlocks only know some Arcane writings.

Male and female names can be the same, although usually an -a, -i, or -ai is added to the end of the name to denote a female. Depending on how powerful the female is, she sometimes will drop this to show her dominance.

Surnames are always related to the name of their mount and the type of animal it is. For example, if your mount is called "Stuck" and it is a wolf or a dire wolf, your last name will be "Stuck-Wolf" or "Stuck-Direwolf". Surnames can change if the character's mount is changed. Surnames can also be kept for descendants if the mount was a legendary animal, which gives the family prestige within the tribal system.

Orcish nomadic herders, of a more peaceful and enlightened nature. Easily discernable by their rat-like faces and thick hairy yellow skin.
Ability Score Increase. Your Strength, Constitution and Wisdom scores each increase by 1.
Age. A yellow orc reaches adulthood at 16 and maturity at 20. Like most orcs, they die early, but it is not unheard of for a yellow orc to reach 75 or more.
Alignment. Tend toward neutral alignments, although pariahs of evil or good are not unheard of, if so, generally, they will be either neutral good or neutral evil.
Size. Yellow orcs vary widely in height from 5 feet to just over 6 feet tall. Most are not fat. Your size is Medium.
Speed. Your base walking speed is 30 feet.
Lesser Darkvision. Yellow Orcs have a weak form of darkvision. You can see in dim light within 30 feet of you as if it were bright light, and in darkness as if it were dim light. You can't discern color in darkness, only shades of gray.
Animal Husbandry and Riding. Yellow orcs are known for their domestication of animals to serve, as such, you are proficient in the Animal Handling skill. In addition, while you are riding a mount, you can increase the mounts speed by 5 feet.
Armor Training. You have proficiency with light and medium armor.
Storyteller. The nature of the tribe means that you have heard stories of all kinds, and one day your tribe will expect you to tell stories as well. Whenever you make a Charisma (Performance) check to tell a story, you are considered proficient in the Performance skill and add double your proficiency bonus to the check, instead of your normal proficiency bonus.
Languages. You can speak Common and Orcish. Dialects between tribes are different but usually discernable. Orcish is usually spoken, as well as a few trade terms in the Common of the world due to the trading of livestock with other people groups. Literacy is unheard of. There are no written records of their dialect of Orcish, storytelling is the main focus of the family group, and so written language is shunned.

When creating a Yellow Orc character, you can use the following table to add some flavor to your looks, if you desire. Or choose your own.