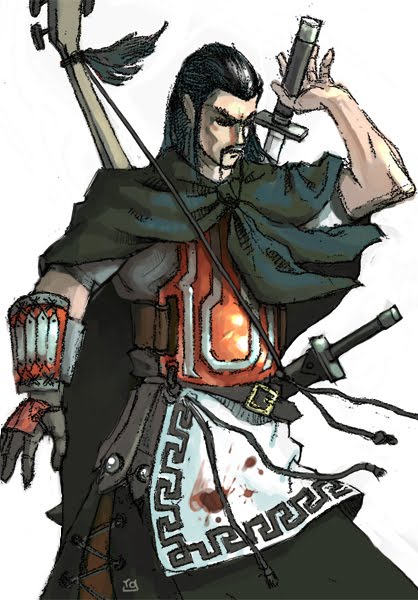 The Warrior Poet is One part Bard, one part fighter, and 100% legend.

Most performers focus on the arcane arts to assist them in their performances. Warrior poets, however, are often just warriors with a talent for entertaining their fellow soldiers, and increasing moral.

Warrior poets are just like regular bards, but do not have access to a bard's magical repertoire. Instead, they study the art of combat. This doesn't mean that their abilities in the non-magical bardic art is in any way reduced. Warrior poets make capable scouts, dignitaries, and spies.

Abilities: Charisma is still important for your bardic performances. As is Intelligence for your bardic knowledge and skill points. However, your physical abilities are now more flexible, as you are not worried about magical capabilities now.

Races: Any race that would make a good bard will make a good Warrior Poet. Dvati make excellent Warrior Poets, Combining the combat advantage of being in two places at one time, and being able to aid each other with skills and performances as well.

Alignment: Warrior Poets are bound by the same alignment restrictions as the Bard.

This class is Identical to the Bard in every way, except as noted below:

The Warrior Poet Loses the Bard's spell casting abilities, and gains bonus feats as the Fighter.

In addition, any feats that require Bardic Music, as long as they do not pertain to spell casting, can be taken in place of a Fighter Bonus Feat.

You also gain proficiency in using your preferred instrument as a weapon. Use the stats of weapon that your instrument most greatly resembles as the stats for this instrument. For example, A guitar could be used as a great axe. A violin and bow may be a mace and short sword respectively. A harp may be a bow.

Add intimidate to your class skills.

Warrior Poets in the World[edit]

Warrior Poets in the Game[edit]