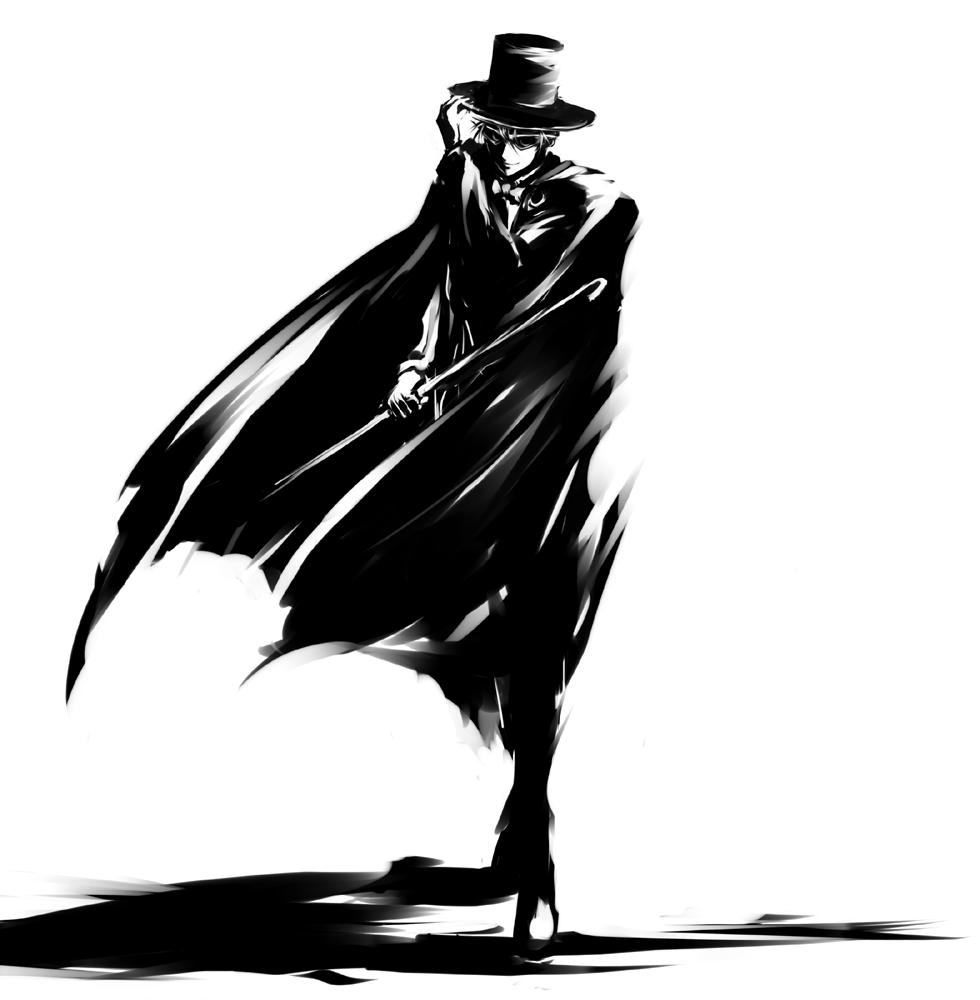 Wanderers are a rare breed. Few creatures are willing to walk the world for months or years at a time, perhaps with companions, but never with a home, never with more possessions than they can carry. Those who can, however, discover an ancient power easily harnessed and overwhelming in scale. The longer they travel, the more they are pushed forward. Never reaching that final destination, the more unhinged they seem.

No one knows what drives these wanderers, but there are many suggestions. Some say, "They are kept alive by fate itself, driven toward great events."

Some say "They have found Ao."

Others say "There are ancient paths, older than any race, and in their desire to be remembered they call out."

Whatever the source, wanderers are rarely seen and even more rarely trifled with. They also come as a harbinger of ill tidings and as such they are usually avoided and those who do see them, quickly forget they did lest they be caught up in the Wanderer's dealings. Wanderers are actually seen frequently, but the danger, misfortune and trouble that comes with them is enough for anyone to deny that they ever saw one. Those who claim to are either lying or have the permanent injuries to prove it.

To become a wanderer one must renounce home, family, and anything else that may tie him to one spot. Some have the fate of Wanderer thrust upon them from being away when their entire village is wiped out, accidentally orphaned and forced to survive on their own are just some possibilities. Wanderers, by their nature, can be of any alignment. Good wanderers have a tendency to show up exactly when needed - a savior silhouetted on the horizon. Evil wanderers are as destructive as they are random, and it isn't as much as they are random as it is that there is usually no one left alive after one comes through; more like a force of nature than anything else.

One with the Road (Ex): A Wanderer's powers are tied to the Wanderer and to the paths traveled - they are powerful but fragile. When a Wanderer who rides an animal, cart, boat, or other form of conveyance runs the risk of having some ill fate befall the conveyance and the severity of it depends on the Wandereder's level. The higher in level the greater the severity for the conveyance, and loses all abilities granted by this class for 24 hours. A wanderer who willingly owns a house or land, has a family (spouse and children, not parents and siblings), runs the same risk as for the conveyance, but with much more dire consequences, or travels for more than a week with a medium or heavy load loses all abilities granted by this class until renouncing or loosing these, and sought an atonement spell.

Always Moving (Ex): It is almost impossible to stop someone who has traveled so far for so long. Wanderers ignore the fatigued and exhausted conditions, and can never be dazed, paralyzed, or petrified.

Mind in Motion (Ex): Touching the mind of one so strangely gifted can be an incredible or frightening experience. If the wanderer ever makes a successful Will save against a spell or spell-like ability, the caster must make an identical save or be dazed for one round. This also applies to psionics.

Road to Ruin (Ex): The Wanderer may focus power into mighty blows. When charging a Wanderer gains an additional +1 to hit and damage for each 5 feet moved, to a maximum bonus of class level. This bonus only applies to the first attack made in that round and is considered an insight bonus.

Travel the Path (Ex): By 3rd level the Wanderer has traveled more than most, but more importantly, has learned - both from the people and the journeys themselves. A Wanderer may, with 24 hours of travel, appear just outside any destination on the same plane. The Wanderer does not eat or sleep during this travel and is safe from any hazards. The wanderer may double the time required and take a number of creatures along equal to the Wisdom modifier, or take four times as long and guide double the Wisdom modifier. In addition, the Wanderer is immune to the maze spell. In using this ability the Wanderer can travel to other lands one could only reach by magic or lengthy sea travel.

One Step (Ex): With just one step a Wanderer can travel farther than a bowshot - in combat a Wanderer is not but a horrific blur. As a move action a Wanderer may teleport with the same effect as a dimension door spell. The maximum range moved is 50 feet + 10 per class level and may use this ability up to class level + Wisdom modifier times per day. Note that this is an extraordinary ability - it does not provoke an attack of opportunity and may still be used in an antimagic field or when planar travel is blocked. This can also be used as an immediate action to evade an attack.

Sure Footing (Ex): The Wanderer does not provoke attacks of opportunity for leaving a threatened square. In addition, the Wanderer moves at full speed regardless of surface conditions being traveled on (ice, oil, difficult terrain, etc.).

Planar Path (Ex): At 6th level the time it takes a Wanderer to Travel the Path is reduced to 12 hours, and may choose a destination on any plane.

Ageless (Ex): A 7th level Wanderer has become so infused with energy and knowledge that physical changes occur. At 7th Level the Wanderer's type changes to fey. As long as the wanderer continues to travel, a Wanderer does not age normally or magically, and is immune to ability damage and ability drain. If the Wanderer already has another type such as planar, enhanced race, dragon, aberrant, or outsider, then the Wanderer gains Fey as a subtype.

Highway to the Danger Zone (Ex): The Wanderer becomes even more adept at movement, striking blows that seem to split the air itself. As a full-round action a Wanderer may use One Step followed by one attack against an adjacent enemy, adding +1 to hit and damage for each 5 feet teleported to a maximum of twice the class level. The target is considered flat-footed for this attack. This attack can negate the protection afforded the target from precision damage allowing a Rogue's sneak attack through.

Frequent Step (Ex): A 9th-level Wanderer may use One Step a number of times per day equal to class level plus triple Wisdom modifier.

Eternal (Ex): Not even the afterlife can hold the Wanderer for long. If the Wanderer is killed and not raised within 12 hours, the Wanderer must choose a destination, appearing there exactly as if using Walk the Path, with no equipment save clothing. In addition, the Wanderer's soul is immune to entrapment of any kind (such as soul bind, trap the soul, or magic jar) and all such effects fail automatically.

Religion: Wanderers span the spectrum of religious worship - often maintaining the the same deity they served before the powerful events that started them wandering or taking up the deity of travelers. Others have given up on faith, instead focused on the tasks and trails at hand, giving faith to the path traveled that it will either continue on or come to an end.

Other Classes: Although Wanderers are traditionally found alone, they can fit in well with many adventuring parties - provided they remain mobile. Wanderers are not all loners or introverts - some enjoy companionship, and any friends that can accommodate such an unusual lifestyle are close indeed. One such class is The Path of Four Winds devotee. They have a similar aspect to themselves as that of the Wanderer.

Combat: Wanderers typically play a flanking or disruptive role in combat. They are extraordinarily hard to pin down and usually take the opportunity to strike at enemies thinking themselves safe at distance or behind others. A Wanderer does have to be careful not to become overextended, or take the necessary precautions to avoid that eventuality.

Advancement: Monk abilities tend to be the most useful when combined with the unarmed and movement abilities of the Wanderer. Still, most classes stand to gain at least something - the ability to quickly close with or flee from enemies should not be underestimated.

Wanderers travel the world for their entire lives - and perhaps beyond. This journey has no particular destination and as they allow themselves to explore where the next road will take them, they find strength in the journey and not where it will lead. The Wanderer does not, however, lead an entirely peaceful life - through the guidance of unseen forces, their own actions or some other means, they are drawn to the great and calamitous events of their times. These events are the things that change the entire world, forever. Because of this, it is during this time that many Wanderers come together and do battle, usually with one another. The battle has no witnesses, save that of the Wanderers and only those who survive the effects of the battle, in far far away lands, are able to record something happening on that date.