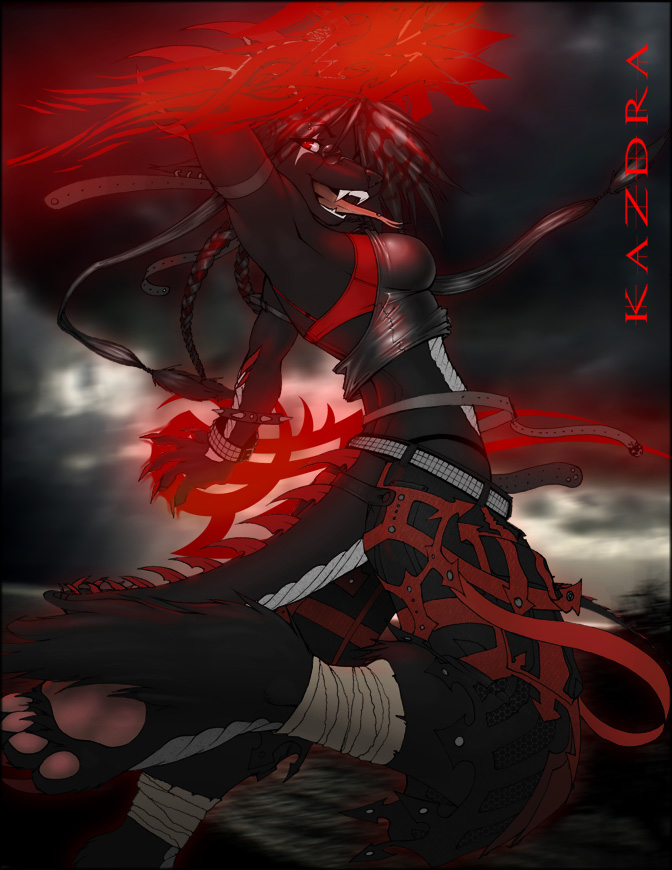 Ulaquins have varying personalities. This is from their mortal blood parent, generally a human. Meaning that one Ulaquin can be calm, another can be aggressive and another can be flirty. All Ulaquins understand that they are under the authority of their handler, a devil appointed to send them on various missions, and obey any orders given to them, so long as they do not directly interfere with the plans of Asmodeous, or any other of the Lords of the 9.

Ulaquins can vary in height, from that of a short human to borderline exceeding their medium size category. They have animal heads and skin that varies from bleach white to shades so black they can only be matched on the hells. They also possess gleaming red eyes that can penetrate through the darkest night, claws that can be retracted and extended for combat and tails similar to a dragons with a scaled belly.

Ulaquins are feared among humans and viewed as a curse, if not born under infernal supervision they are slain at birth. Elves believe Ulaquins are the drow's spawn, often misconceiving them as demonic soldiers rather than infernal spawn. Dwarves can tolerate Ulaquins aslong as they stay within the law of the clan.

Only Devils and devil worshipers openly welcome Ulaquins, as they are seen as possible acolytes on the material by the aforementioned and as scions of their masters by the later.

Demons view Ulaquins as an enemy due to their infernal blood.

Ulaquins are Always Lawful and tend to be Lawful evil when raised by devils, Lawful Neutral when raised by a collaborative of humans and devils and only Lawful Good when they believe in the cause of good strong enough.

Ulaquins have no lands of their own and often reside with cults of Asmodeous or on the 9 layers of hell.

The creature can detect opponents within 30 feet by sense of smell. If the opponent is upwind, the range increases to 60 feet; if downwind, it drops to 15 feet. Strong scents, such as smoke or rotting garbage, can be detected at twice the ranges noted above. Overpowering scents, such as skunk musk or troglodyte stench, can be detected at triple normal range. When a creature detects a scent, the exact location of the source is not revealed—only its presence somewhere within range. The creature can take a move action to note the direction of the scent. Whenever the creature comes within 5 feet of the source, the creature pinpoints the source’s location. A creature with the Track feat and the scent ability can follow tracks by smell, making a Wisdom (or Survival) check to find or follow a track. The typical DC for a fresh trail is 10 (no matter what kind of surface holds the scent). This DC increases or decreases depending on how strong the quarry’s odor is, the number of creatures, and the age of the trail. For each hour that the trail is cold, the DC increases by 2. The ability otherwise follows the rules for the Track feat. Creatures tracking by scent ignore the effects of surface conditions and poor visibility. Water, particularly running water, ruins a trail for air-breathing creatures. Water-breathing creatures that have the scent ability, however, can use it in the water easily. False, powerful odors can easily mask other scents. The presence of such an odor completely spoils the ability to properly detect or identify creatures, and the base Survival DC to track becomes 20 rather than 10.