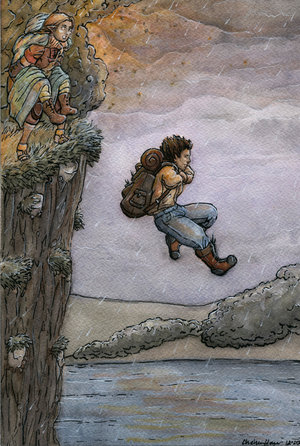 Fearless risk takers set loose on the world. Known for delivering a hurting with a charge attack and a handful of tricked out skills, Thrillseekers have a knack for staying alive when others keel over, doing so without spells, stealth or a mastery of weapons.

Background: People with nothing left to lose, those easily bored or any person that has a desire to lay it on the line, starts down the path of a Thrillseeker. Not many live past that first few charges, those that do slowly develop tricks and traits that prepare them to survive the next headlong task that fancies their desire. Eventually, a definite uniqueness emerges separating one Thrillseeker from the next or for that matter, a lunatic with a death wish.

Role: The Thrillseeker is a problem starter and problem solver, with a unique bag of skills and personality bent to match. He can be a trigger man or leader but isn't far from action.

Races: Humans, Half Elves, and Half Orcs make up the lion's share of Thrillseekers. Elves typically value life too much to gamble it against the odds for entertainment sake. Dwarves have churned out many famous Thrillseekers most run too stiff. While both Halflings and Gnome share the joy of the Thrillseeker few sport that toughness to pull it off as a life calling.

Other Classes: Thrillseekers get along with most other classes but none more than Barbarians and Bards but for completely different reasons. Barbarians give Thrillseekers a run for their money in bravado, and both (usually) enjoy the contest. While Bards admire the free spirit of Thrillseekers, often peppering thier stories with glorious actions of Thrillseekers. Thrillseekers come to odds when they encounter Paladins and Monks but more so the latter. It the lawfulness and the restraint that make the two flaming oil and a water elements, especial when it comes to tendency of a Thrillseeker to make snap decision time. At higher levels they tend to get along much better. There is also a bit of a kerfluffle between Druid and some Thrillseekers, who don't see eye to eye on animals. Lastly Thrillseekers have much admiration for Rangers but the feeling isn't always mutual.

Alignment: Chaotic, who else would, repeatedly plunge face first without a safe plan?

All of the following are class features of the Thrillseeker.

Half Step(Ex): A Thrillseeker is quick to action, they get a 1+ 1/2 Thrillseeker's level bonus to initiative.

Terrifying Charge: At 10th level a Thrillseeker gains Terrifying Charge. The war cry and advancing charge of a Thrillseeker can cause his enemies to flee. This only effects the target of the charge and those with in 10 ft of the target. It only effects opponents with less hit dice than Thrillseeker. The fear effects last 1d4 rounds. A Will save equal to the Thrillseeker's Level + Charisma negates the effect, a successful save negates the effect for 24 hours. Creatures immune to fear are unaffected. Effects vary according to save. Those who fail the save are effected as a fear spell.

Death Charge: At 16th level a Thrillseeker gains Death Charge. Any target hit by Thrillseeker's charge must make a Fort save equal to the 1/2 damage dealt by charge attack or die. This doesn't effect creature immune to critical hits.

Last Charge: At 19th level a Thrillseeker gains Last Charge. If a Thrillseeker goes below 1 hit point they can make a charge attack as a free action against any target with in 1/2 their move, they can not die by damage until they have completed the attack.

Trick Skill(Ex): Thrillseekers can pick a skill trick from the following 10 options, or may select a Skill Trick they already have and make it an Improved Skill Trick.


(1) Buck the Odds:
Trying to do something nearly impossible or greatly dangerous is Bucking the Odds.
If the Thrillseeker attempts an action that could result in death, or the failure of a dice single roll is likely to result in imminent death (with in 10 rounds) they gain +2 or + %10 for Bucking the Odds.

Improved Aggressive Mount, You can to 'break' the creature's will effectively dominating it with a Ride Check of 25+HD, failure by 10 or more and the Thrillseeker gets bucked and takes crash damage. This is a full round action, and only effects creatures with lower Intelligence scores than the thrillseekers. They must succeed 3 times in 24 hours in order to dominate the creature, although not in order. The creature is only dominated for 1 hour per level. A creature is only 25% likely to stay dominated once the Thrillseeker dismounts, although future attempts to break it only require 1 successful attempt.

(3) Aggressive Roping:
With a Use Rope skill a Thrillseeker can entangle a target up to 30 feet as full round action, if they succeed in Rope check roll touch attack equal to touch armor class+ 10DC.

Drag damage is 1d8 per 10 feet.
Improved Aggressive Roping, you gain +4 to all Use Rope rolls.


(4) Exhaustive Tumbling:
Trying to hit a tumbling Thrillseeker is exhausting, they dodge out of the way just before an attack hits cause the attacker insult and minor injury.
Using Exhaustive Tumbling the Thrillseeker goes full defensive(+2 to AC, no attacks), each time they are attacked while performing an Exhaustive Tumble they may use their tumble roll in lieu of AC, taking which ever result is better.

(5) Lucky Devil:
A Thrillseeker wouldn't survive long if they were made an example of every time. Thrillseekers have developed a knack of getting through an encounter with least amount hurt.
Once per day, a Thrillseeker can opt to take minimum damage or duration of a given effect, (E.G. Hit by a fire ball 6d6, you failed your save, you can opt to take 6 hit points.)
Improved Lucky Devil, you can use Lucky Devil three times per day.

The potency of Macho Promises grow over time.

(7) Extreme Sport:
The Thrillseeker are deft at narrowly avoiding death, particularly in medium or light armor when it comes to balancing, swimming, climbing, and jumping.
A Thrillseeker can take a 20 as a result on 1 climb, jump, balance or swim check each once per day. This must happened before a roll is attempted.
Should the Thrillseeker fall while climbing, jumping or balancing they get a climb check 10 feet before they hit bottom (or every 50 feet.) If they make the climb check (Original DC +5) then they found a hold, and are no longer falling. Negate this if their is nothing with 10 feet of Thrillseeker's reach.
A Thrillseeker can use to Swim Checks to dive from great heights. A success check negates damage. Only 5 feet of water is needed.

A minimum of 1 foot of water is needed.
Thrillseekers suffers no armor penalty for climb, balance, and jump checks while in light armor.

(8) Show Off:
A Thrillseeker can attempt feats they haven't mastered.
A Thrillseeker gains a swappable feat, which allows them to pick a new feat everyday. They can not pick the same feat two days in a row.
The Thrillseeker must have the prerequisites for the feat.

(9) Aggressive Survival:
The Thrillseeker can find the most dangerous route from point a to b.
While being chased, followed or tracked, a Thrillseeker can take the pursuer through rough and dangerous territory at peril to the chaser, and potentially themselves, with an opposed survival roll.

A Thrillseeker can use Roughshod, Hazard or Hostile Encounter each once per day. It takes effect in 1d8 rounds for a chase, 1d8 minutes for being followed, or 1d8 hours when being tracked.

Adrenaline Rush(Ex):
At 3rd level Thrillseeker turn fear into an Adrenaline Rush.
Thrillseekers are immune to fear and fear effects, and instead are effected as below. These effects remains as long the intended effect plus an addition 5 rounds. A Thrillseeker is also effected by being close to death.

Size Up(Ex):
At 4th level a Thrillseeker gains the ability to Size Up the odds.
A Thrillseeker can determine the exact percentage or DC needed to accomplish a task after direct observation (1d10) with a Intelligence check DC 10. A Thrillseeker that fails can try again to determine that particular task the next day. This works on any DC (including Armor Class) and opposed roll. [E.G. A Thrillseeker wonders what his chances to beat an ogre in an arm wrestling contest, The ogre has a +12 to strength rolls verse +2 for Thrillseeker.]

Bloody Fortune(Ex):
At 7th level a Thrillseeker gains the Bloody Fortune ability used to push chance at cost to their own health.
A Thrillseeker can sacrifice 10 hit points for a reroll on an attack, or skill check.


Death Dodging(Ex):
At 13th level a Thrillseeker gains the Death Dodging ability, which puts them on track to out last their equipment.
A Thrillseeker can attempt to divert an attack that has already hit them to their gear, attacked can be diverted if the Thrillseeker succeeds a Reflex save equal to the attack roll. This attack applies to melee, ranged, and spell with touch attack rolls.
A Thrillseeker can use the Death Dodge ability until they fail to make a reflex save, after which they must wait 24 hours.
A successful death dodge will sunder one of Thrillseeker's item, unless they succeed the Reflex save was a natural 20.
The sundered item must weigh 1 or more pounds, artifacts can not be sundered but are knocked 20 feet away.

Die Harder(Ex):
At 15th level a Thrillseeker gains Die Harder and is almost impossible to keep down.
As Die Hard Feat except, may stay alive until they reach -19. At -20 they fall dead. At -10 the Thrillseeker starts every round as prone.


Living Legend(Su):
At 16th level a Thrillseeker gains Living Legend status, they have soaked so much pain and remained alive its become habit.
A Thrillseeker now heals at 3 times the normal rate. Magical healing has double the effect.


Die Hardest(Su):
At 20th level a Thrillseeker gains the Die Hardest ability, the son of a bitch just won't die. As Die Harder, but now may stay alive until they reach -29, at -30 they fall dead. At -10 the Thrillseeker starts every round as prone.

Characters with ranks in <-the appropriate skills-> can research Thrillseekers to learn more about them. When a character makes a skill check, read or paraphrase the following, including information from lower DCs.

Thrillseekers in the Game[edit]