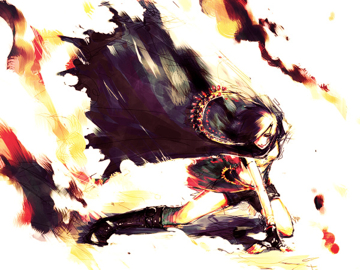 This picture is actually upside down.

While the common rogue is a thief, con-man, and scout extraordinaire, the thief acrobat is a highly trained specialist in the art of housebreaking and feats of dexterity and acrobatics. As an adventurer, they are masters of negotiating difficult terrain and situations with flair and panache. Masters of athletics and gymnastics, they hone their art to a level that seems to be magical to the uninitiated. Most use these skills to gain the easy score or poorly defended hoard, but some take up the life of an adventurer as a chance to test their purely mortals skills against the world full of magic and supernatural creatures.

Weapon and Armor Proficiency: Thief Acrobats are proficient with all simple weapons, as well as the sap, the shortsword, the whip, the bolas, the long staff, darts, climbing claws and the shuriken.

Thief Acrobats are not proficient with any armor or shields.

When wearing armor, using a shield, or carrying a medium or heavy load, a Thief Acrobat loses her AC bonus, as well as her featherweight ability.

Featherweight: When unarmored and unencumbered, the Thief Acrobats base move is a +5. This gives a +1 miscellaneous skill bonus to Acrobatic abilities every two (2) levels.

Acrobatic Flair (Ex): A Thief Acrobat may move her full movement while using the Tumble or Balance skill without suffering a penalty or increasing the DC of her check.

Pole Jump (Ex): If holding a pole, spear, staff, long staff, or other pole-like object in both hands, a Thief Acrobat can add twice her reach to her final distance moved during a Jump check, and in this instance her jump distances are not limited by her height.

Evasion (Ex): If a 2nd level Thief Acrobat succeeds in a Reflex Save to halve damage, she suffers no damage instead.

Sure Climb (Ex): At 3rd level, a Thief Acrobat gains a climb speed equal to half her land speed.

Kip Up (Ex): At 3rd level, a Thief Acrobat may stand up from prone as a free action that does not provoke an attack of opportunity.

Quick Escape (Sp): At 4th level, a Thief Acrobat may make a Reflex save to Tumble or Roll into a "safe" area as a move action. This is a strategic withdrawal that does not provoke an attack of opportunity.

Grapple Line: At 4th level, a Thief Acrobat becomes a master of using grapples and grappling lines. By firing a missile weapon designed as a grappling weapon at an unoccupied square and doing at least 1 point of damage to an object filling that square (wall, ceiling, statue, etc) or a securely affixed object (ceiling post, small statue affixed to floor, etc), a Thief Acrobat can run a rope from his current position to that location as a full round action. He may then use this rope to make Balance or Climb checks as normal.

Weapons designed as grappling weapons have a simple pulley and loop attached at the end and are balanced for this modification, and have at least a 50’ length of strong thread running through it and connected to a rope so that it can be pulled through swiftly. They cost an additional +1 GP each (ammunition costs as much as normal weapons), and suffer a 5 ft reduction in range increment. Many grappling weapons are made out of adamantine in order to better penetrate hard materials like stone.

Rapid Stealth (Ex): At level 5, the Thief Acrobat does not suffer the -10 penalty to Move Silently or Hide for moving at her full normal speed. She still suffers the normal -20 penalties to hide and move silently for running or fighting if she performs those actions.

Mercurial Charge (Ex): At level 6, a Thief Acrobat need not move in a straight line to charge, nor must she charge the closest available space. She still may not move back on herself during a charge, and her charge move still ends as soon as she threatens her target.

Unsettling Choreography (Ex): A Thief Acrobat of 7th level is adept at making other creatures fall down, and may use her Dexterity Modifier in place of her Strength modifier when making a trip or bull rush attempt.

Improved Evasion (Ex): When a Thief Acrobat of 8th level fails a Reflex Save to halve damage, she takes half damage anyway.

Athletic Cascade (Ex): At 9th level, if a Thief Acrobat moves before making an attack, for the purposes of flanking she may count any square she has moved through as threatening an opponent, in addition to the space she is actually attacking from. In this manner, she may even flank with herself.

Skill Mastery (Ex): At 10th level, a Thief Acrobat is able to take 10 on any Appraise, Balance, Disable Device, Jump, Hide, Move Silently, and Tumble checks even in stressful or dangerous situations.

Aggressive Stealth (Ex): A Thief Acrobat of 11th level does not suffer the -20 penalty to Hide or Move Silently checks for running or fighting.

Dedicated Evasion (Ex): At 12th level, a Thief Acrobat gains the ability to evade with almost supernatural skill. As a standard action, she can add her Thief Acrobat level as a Dodge bonus to her Reflex Saves and AC for one round.

Power Slide (Ex): If a 13th level Thief Acrobat takes damage from an attack, she may allow herself to be flung backwards, thereby lessening the impact. She may make a Balance check with a DC equal to the damage inflicted and if she succeeds, she suffers only half damage. This is a skill check, not a Saving Throw, so abilities such as Evasion do not apply. She is moved away from the source of damage by 5' for every 5 points of damage (or part there of) negated in this way. If there is not enough space for her to move, she suffers a d6 of damage for each square not moved. If she passes through an occupied square, the Thief Acrobat would have to make a tumble check to avoid attacks of opportunity.

Death from Above (Ex): At 16th level, the Thief Acrobat has learned to used the energy of a fall to devastating effect. If the Thief Acrobat can fall at least 30’ (by falling from a height or by using a Jump check) and end in her enemy's square, any attacks made at the end of that fall do triple damage. Sneak Attack is not multiplied in this way.

Supreme Skill Mastery: At 19th level, a Thief Acrobat is able to take 20 on any Appraise, Balance, Disable Device, Jump, Hide, Move Silently, and Tumble checks even in stressful or dangerous situations, and does not take twenty times as long as usual for taking 20.

Supreme Evasion (Ex): At 20th level, a Thief acrobat takes no damage from any effect requiring a Reflex save.