The Bag of Avant-Garde Vices:

What's inside this bag?

Name the one who shall look and see

What's inside this bag.

What's inside this bag?

Place an item inside of it,

and the bag shall grant your deepest wish!"

When opening the bag by any person for the first time, a playful sing-song nursery rhyme will emit from this wondrous item, telling the user in a teasing manner that in order to use it properly you have to place an item of equal value to what you desire, but the bag will "interpret" what it gives based on its whimsical nature.

Ex:) Lord Edmure Longerstride desires for the bag to grant his wish of the perfect maiden to be his bride, and places within it an immaculate diamond wedding ring symbolizing his longing and sparing no expense; however, The Bag of Avant-Garde Vices being a devilishly fickle magical item, instead grants what the lordly knight wishes but not in the way he ideally wanted as before him appears the most beautiful figure of a maiden-that also happens to be a lifelike sex doll.

Whenever a character uses The Bag of Avant-Garde Vices, the event of opening the bag/placing an item into the bag/or pulling an item from the bag will trigger the bag's special ability which is to cast a random "effect" on the person handling it, though sometimes these effects can target the area around as well. There is no Spell Resistance or Will Save vs the bag, but characters besides the one handling the bag can make a Reflex Save (DC 15 + Level of Spell + 5 per feet of distance) to avoid contact with the bag's magic. The following is a list of possible "Effects" that can occur using the bag, which must be rolled on a d100 by the DM to determine what effect the character gains:

10-20) Summon the Noble Djinni "Shiris", who is a Chaotic Good NPC with connections to Draconis Kingdom's history. 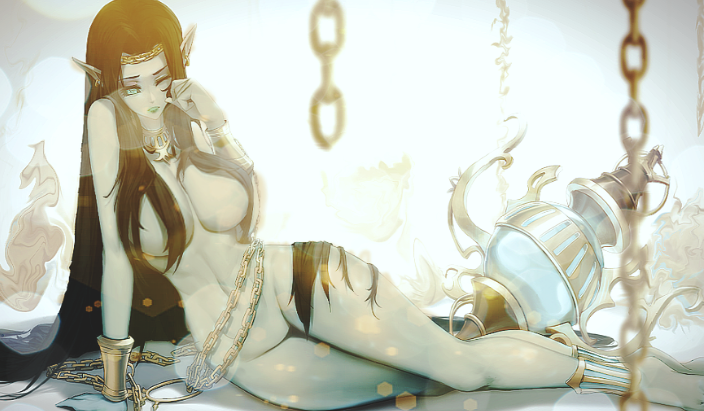 The ancient beauty of magic and mischief.

20-30) Character becomes the sex opposite to their original; if they are genderless, then they gain both genders with both sexual reproductive organs present while appearing androgynous.

30-40) A crystal jar appears containing "Special Honey" that has a pure golden color that gives off scintillating rainbow hues in refracted light and smells of fresh vanilla bean and banana bread; when drunk by a character, they roll a d6 for the following effects:

1. Grows a Bee abdomen with an ovipositor and stinger that deals 1d6 damage, injecting a Paralyzing Venom that has a Fortitude Saving Throw DC of 15 + Strength Modifier.

2. Hair extends in growth by 3-4" and hair color changes to a "shiny black" hue with bleach blonde highlights.

5. Grows a pair of large Bee wings that have a flight speed of 80 ft. (good); if character already has a natural pair of wings, their wings disappear permanently.

6. Decreases breasts by one size regardless of gender.

40-60) A crystal jar appears containing "Essence of Reptile" that has a lucid sickly green-yellow color that is the thick reproductive fluids of Hissi and Krawrk combined, having a distinctively pungent smell reminiscent to a swamp; when drunk by a character, they roll a d6 for the following effects:

1. Speed decreases by one size category, but gains a +4 to Hide, Move Silently, Climb, and Jump checks.

2. Grows a ghostly white foot-long phallus that is half a foot thick and hides in a reptilian cloaca (similar to an Alligator) that appears on the groin; this replaces a male and female character's current reproductive organ, but if they possess both genders already then the effect removes one of the reproductive organs instead. The character's phallus is permanently erect. The whole structure is filled with dense layers of a stiff protein called collagen that keeps it erect even when within the cloaca. This grants a +6 bonus on all Charisma-based checks.

3. Eyesight becomes reptilian with Darkvision of 60 ft. If non-human to begin with, the character gains human eyes with normal vision instead.

4. Body is covered in a layer of small reptilian scales (pattern similar to Alligator) whose color is based on natural hair color. The character is now able to breathe naturally underwater while being able to hold their breath up to 24 hours before needing to replenish oxygen supply.

5. If the character had horns and/or hair, they are replaced with a sail that sprouts from the dome of the head and ends inbetween the shoulder blades, having the appearance and patterns of the prehistoric Dimetrodon. If the character had no horns or hair to begin with, they grow a pair of draconic horns that glow as embers at the tips.

6. The character gains the Regeneration ability, gaining 3d8 Hit Points per round. The healing doesn't surpass character's total Hit Points, thus a character can't over heal with this ability.

60-90) A crystal jar appears containing "Dragonheart", half of a glowing fiery red heart that still beats with lifeforce energy. If eaten, it will turn its consumer into a Half-Dragon that roll a d6 for the following traits:

1. Grows a pair of medium-sized wings with coloration matching hair and eye color.

2. Gains a perfume-like scent that specifically attracts Dragons/Wyverns to them.

4. Character gains the ability "Hold Breath" where the character can hold its breath for a number of rounds equal to four times its Constitution score before risking drowning.

5. Character gains the ability "Dragonborn Fury". When the character takes damage that would make them bloodied (50% or less hit points), they enter a rage that grants them a +4 bonus to Strength and Constitution-based checks until they are no longer bloodied or have not fought for at least 1 hour. The character cannot use skills or abilities that require patience or concentration (such as moving silently or casting a spell) while in this fury.

6. Character gains the Flyby Attack feat, but loses all Resistance and Immunities to Sleep and Paralysis effects.

90-100) A crystal jar appears containing "Mû Milk", a thick foamy white liquid that sloshes with a sweet vanilla fragrance that tastes of honey and cream; when drunk by a character, they roll a d6 for the following effects:

1. The character gains Stuttering, also known as stammering; a speech disorder in which the flow of speech is disrupted by involuntary repetitions and prolongations of sounds, syllables, words or phrases as well as involuntary silent pauses or blocks in which the person who stutters is unable to produce sounds. At the end of every sentence, the character will compulsively end their dialogue with a "moo".

3. Character obtains a Cow Tail, Cow Hooves, and Cow Ears; if character already had a tail, hooves, and ears, they are replaced by the bovine traits instead.

4. Character produces aphrodisiac based bovine milk from chest (regardless of gender) and must be milked once a day or suffer from Exhaustion.

5. Chest (regardless of gender) grows three sizes larger with 1" long nipple "nubs" that are highly sensitive to touch-like sensations, causing a -6 penalty on all Grapple and Escape Artist checks.

6. Creatures around your character are compelled by undeniable urges to grope and tease sensually. There is no Save against this Mind-Affecting ability, but if a creature has a Spell Resistance they use that to determine whether they beat the spell's (DC 15 + Spell Level) challenge or not. Creatures will not cease in molesting the character until they've beaten the spell's DC, have been Intimidated, or become occupied by something else that breaks the allure-like effects.