Iron Bull: You know one thing I miss about Par Vollen? Bananas.

Blackwall: You're talking about the fruit, right?

Blackwall: Please, tell me you're talking about the fruit.

Tessai are deeply afraid of deep water, as they've learned their people will sink as rocks and drown in them, thus they see slavery as an extremely beneficial asset to cultures since their own is highly dependent upon it for safety purposes. Tessai are also extremely vulnerable to fire, which can make a Tessai irritated just by someone mentioning it around them; seeing it will definitely get a negative reaction out of them as Tessai are notably superstitious of fire's origins being associated with the demon realms and therefore haunts people or causes great amount of dissension. Tessai are egoistic in the fact their selfishness and ability to being very self-sufficient has most believing they're impervious to most race's tactics, only ever seeing Oni, Dragons, and Orcs as relate-able in strengths which they have gladly been known to contract themselves to as mercenaries for the pure sport of one-upping a race they consider to being weak. To the Tessai, their race's pride means everything and they refuse to suffer an impudent blow by any obstacle, creature, or person, taking extreme offense to those that dare try even to the extent of becoming vindictive and willing to lead low personal blows to the victim and their associates.

The Tessai are envious of one thing though: beauty, and they will strive by any means of taking what they deem as beautiful into their own safekeeping, even by force if necessary for so strong is their compulsion to have it and no one else. In the tales of old, there are stories passed down of lovely maidens who were kidnapped by tall men of icy color that forced them into becoming their wife and leading a life far from the homes they grew up in, creating a new family for the Tessai that had captured her. Other stories have told how jealous a Tessai had become in seeing a man owned that which the giant deemed he didn't rightly possess, and go on a rampage to destroy everything he loved just to watch the man suffer and succumb to the losses.

Most Tessai though try their best to teach their children in being more methodical and diplomatic in their approach with other races and obtaining beautiful things, as often preach with fables that pride, greed, and envy are the faults that lead a person into becoming a dragon or demon over time, something the Tessai consider horrific as those creatures lead lives knowing only the lust for more and never being satisfied with anything life has to offer, a curse most Tessai share in the view of not wanting; therefore those who are aggressive in obtaining things of beauty are often rare cases that live outside of Tessai communities, being a lone wolf trying to establish themselves on their own merits, whereas most Tessai strive in working together in objectives to improving their culture as a whole, as they see selflessness as one the greatest teachings of all Tessai beliefs.

A Tessai loves to craft beautiful and wondrous works, showing off their culture and skill with great pride and accomplishment; Tessai believe that in all jobs designated by their government to individuals, one must strive to finding happiness in their duty and creating beauty in it, as this is the truest form of pride, purity, and selflessness that Tessai teach all their people to adhere to with passion and honor. To lose one's way in their duty, is to lose one's soul, a concept that Tessai are generally afraid of and do all they can to prevent from occurring within their culture.

“ That little wimp! I'll knock the s-s-stutter right out of him. Marina doesn't know it yet, but she's going to be my wife! Our children will be the strongest, the smartest, the bravest… not to mention the best looking. Why, they'll be just like ME! I'm telling you, boys, Marina is as good as MINE! „ ~ Drake telling his goons his plan to make Marina his mate.

“ Wake up and smell the seaweed, you little fool! Nobody's gonna marry a loser like you. Now give me that stupid pebble! „ 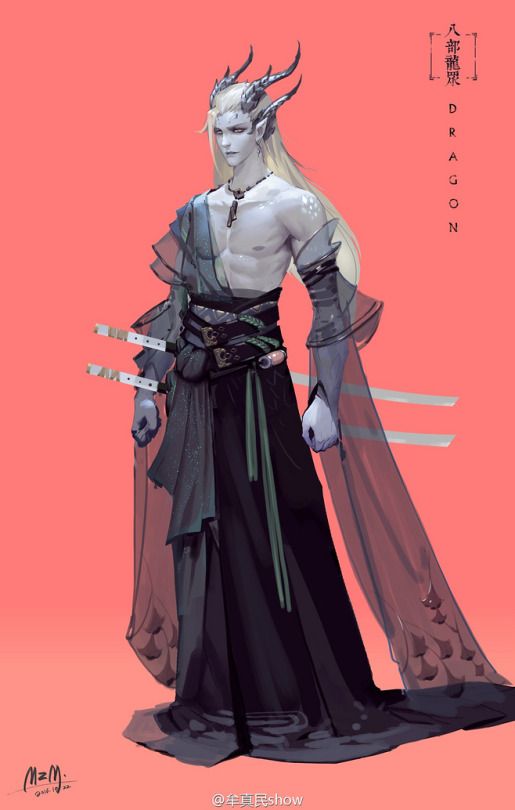 Tessai are faithful followers of Bushido in Pindar Kingdom, sending dissidents into exile.

The Tessai are a tall race of giant standing well over 9 feet tall. They are considered to being more lithe in frame then their robust cousins the Oni, yet having more powers and abilities then their ancestral giants had before. Tessai skins hold a pale complexion, having colors that range from pearl to icy blue, to a frigid white. All Tessai have extremely long thread-like silvery white hair that seems to float at the ends like wisps. Tessai have low-set slanted back ears that are pointed at the tips giving a demonic appearance, with their heads being adorned with horns that curl either like a bull's, ram's, or dragon's style would; the amount of horns a Tessai had was dependent on age, as well as if an offspring had been born with alpha or omega traits. Tessai remained fair as they aged, seeming to appear the age of adulthood rather than what their actual age was, with eye colors that ranged in vividness depending on how much magic flowed in their veins, which improved their status amongst their cultures. Colors with high magical properties amongst Tessai included Violet, Cyan, Turquoise, Coral Red, Lime Green, and Magenta; normal eye colors amongst Tessai are milky white, silver, and a dark blue-gray.

Tessai are dangerous primarily due to two supernatural abilities: one is their ability to create blinding blizzards that can freeze victims to death, the other is their ability to harden their bodies into stone as a defensive counter to attackers. Tessai are the descendants of Frost Giants that paired with Yuki-Onni (a demonic Yuki-Onna) to enhance their race's genetic traits, thus being viewed by most outside races with extreme caution and distrust. Tessai are self-sufficient in their communities, setting about jobs based on their people's intelligence, skills, strengths, and gender. Like their ancestors, Tessai are completely immune to natural and magical cold, giving them strong advantages high up in frozen mountains where living conditions are severely challenging. Yet while most would expect the Tessai to live in lone wintered mountain ranges, they Tessai prefer to settle in dense evergreen woods where magic is channeled to always make the land winter. The Tessai have no fear of outsiders impeding on their lands, as they erect mighty walls of snowstorms to always be active around their communities, shielding them from prying eyes, and making attacks made by stealth impossible.

The Tessai are resilient fighters, having the power of the earth flow through their veins much like their Frost Giant ancestors, though lacking the paralyzing gaze of the Yuki-Onna. What they lack from the Yuki-Onna, they made up for in their demonic traits, which granted them the natural ability of being telepathic, and having strong resistances to Electricity and Poison. Tessai are great smiths who forge beautifully exotic weapons and armor with small amounts of their own blood so that the forged items will carry on these traits within them similar as to how a magical enchantment would. Their craft is highly desired across lands due to this, but Tessai are loathe to trading any skill secrets to other nations, as they feel they have little to gain from other societies who are not as magically attuned as their race is.

Tessai follow along the Neutral Alignment paths, with their extremes depending on how closely they follow the Eight Edicts of Kimon; a faithful Tessai will most likely be True Neutral or Lawful Neutral, while an outcast Tessai is chaotic neutral who decides his own code of morality. A Tessai who follows their cultures laws but doesn't believe in the Eight Edicts of Kimon is most likely to being neutral good, a pacifist who simply wishes to live a life of comfort with a good-natured spirit to those around them.

Tessai hardly ever make their presences known in rural areas with larger populations, and they prefer inhabiting the countryside and wilderness, keeping their communities spread out into towns rather then clustered into large cities. Tessai prefer to live in climates whose temperatures are reminiscent of being high in the snowy drifts and icy caves of mountains. They revel in the the natural beauty of life and nature, resulting in their cultures being akin to the Edo Period of Japan, and use their supernatural abilities to manipulate ice and snow to create packed blocks called Ikko Brick, which is then used alongside intricately carved stone and Tatami to create Machiya homes.

The Eight Edicts of Kimon:

1) In all things, strive to become beautiful in body, mind, and spirit.

2) Duty is the highest honor, to disobey this is to have no name amongst Tessai.

3) Pride is the privilege of Tessai, master it but do not become overcome by it.

4) Selflessness is the path to purity, placing the Body of Tessai over the one is just.

5) To Spread the Eight Edicts of Kimon is the greatest goal of all Tessai.

6) In all professions, love and joy can be found through hard work and dedication; to stray from this is to become worse than the Faithless.

7) Respect nature's laws by mastering and tempering her, as there is no god that truly owns the world and its races.

8) Let no object, creature, or person soil the name of the Tessai, to do so is to become Soulless.

The official language of Tessai is Giant, though to better understand and have advantage over other races it is common practice in Tessai education to be taught as many languages as possible, with notable selections being Common, Draconic, and Orc.

At will: dancing lights, fog cloud, gust of wind, ray of frost