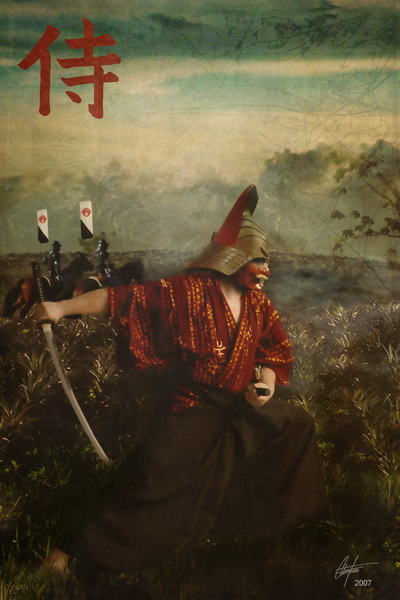 Tenken comes from the Japanese word for “heavenly sword” or “gift from the heavens”. The speed at which those who deserve the title of tenken move shows the skeptics why. A tenken is an extraordinarily agile swordsman capable of incredible feats of movement and combat. High level tenken claim that they are often never touched in a fight.

It is customary for a tenken to only wield one weapon at a time. Barred from multiple or double weapons, they find ways to compensate by increasing the effectiveness of their one weapon.

Tenken often possess scrawny and unimpressive physiques for front-line fighters, but they move with fluidity that catches any eye fast enough to track them. Their sheer speed and agility make them fearsome opponents on the battlefield, and anyone suicidal enough to charge into a melee with no armor and only a single sword surely leaves an impression on even the most hardened of soldiers.

Abilities: Dexterity is by far the most important ability for a tenken. It affects his armor class, attack and damage bonuses, and allows him to make saves with incredible efficiency. Wisdom is the second most important ability, as it increases his Armor Class and strengthens his otherwise subpar Will saves.

Races: Any, but the naturally dexterous races are favored. Amongst the drow, the militaristic aspect of the tenken flourishes.

Alignment: Any, but usually with an unlawful disposition. However, this is not mandatory. A tenken is typically a free spirit used to doing what they want when they want, but it should not be said that they do not have morals. Good-aligned tenken usually have high moral standards, but they merely have their own ways of protecting their ideals. Evil tenken pride themselves on being “doers, not planners” and do their best to go through life whimsically, avoiding responsibility whenever they can.

All of the following are class features of the tenken.

Fast Movement (Ex): A tenken gains an enhancement bonus to his speed, as shown on Table: The Tenken.

Duelist (Ex): At 1st level, during your action, you designate an opponent and receive an attack and damage bonus against that opponent on your first attack each round and a dodge bonus to Armor Class against all attacks from that opponent. You can select a new opponent on any action. A condition that makes you lose your Dexterity bonus to Armor Class (if any) also makes you lose dodge bonuses. Also, dodge bonuses stack with each other, unlike most other types of bonuses.

Surefooted (Ex): At 1st level, the tenken moves with unparalleled grace. A 1st level tenken can always take 10 on a roll for Balance, Jump, and Tumble checks, even when circumstances would normally prevent him from doing so. [Note: This is not related to the Acrobatic feat, which can be taken for more ranks in the overlapping skills.]

Dodge: A tenken is an elusive opponent, bending and weaving through sword strikes in ways that few could emulate. At 2nd level, the tenken gains Dodge as a bonus feat even if he does not meet the prerequisites. If he already has this feat, then he may select a feat from the list of fighter bonus feats.

Blitzlauf (Ex): At 3rd level, the tenken's sheer speed makes him difficult to track in combat. On any turn where he has moved 10 or more feet, the tenken's form appears to waver and shift, and he gains 20% concealment as if he was affected by a blur spell. This effect cannot be seen through because it is simply a result of his quickness.

Mobility: At 4th level, a tenken gains Mobility as a bonus feat even if he does not meet the prerequisites. If he already has this feat, then he may select a feat from the list of fighter bonus feats.

Battōjutsu (Ex): At 6th level, a tenken relies on mobility to deal extra damage by making one swift and powerful strike. During any round in which he moves at least 10 feet, as a standard action, he can make one attack at his highest base attack bonus that deals additional damage. At BAB +6, you deal double damage. At BAB +11, you deal triple damage. At BAB +16, you deal quadruple damage. This attack requires two hands to execute: one to hold the scabbard and one to hold the blade. If you make a Battōjutsu attack, you cannot make any other attacks that round, except for attacks of opportunity, and neither can you combine it with a full attack.

Spring Attack: A tenken gains Spring Attack as a bonus feat at 6th level even if he does not meet the prerequisites. If he already has this feat, then he may select a feat from the list of fighter bonus feats.

Wall Runner (Ex): A 7th level tenken can take part of one of his move actions to traverse a wall or other relatively smooth vertical surface if he begins and ends his move on a horizontal surface. The height he can achieve on the wall is limited only by this movement restriction. If he does not end his move on a horizontal surface, he falls prone, taking falling damage as appropriate for his distance above the ground. Treat the wall as a normal floor for the purpose of measuring his movement. Passing from floor to wall or wall to floor costs no movement; he can change surfaces freely. Opponents on the ground can make attacks of opportunity as he moves up the wall.

The tenken can take other move actions in conjunction with moving along a wall. For instance, the Spring Attack feat allows him to make an attack from the wall against a foe standing on the ground who is within the area he threatens; however, if he is somehow prevented from completing his move, he falls. Likewise, he could tumble along the wall to avoid attacks of opportunity.

Sprinter (Ex): At 9th level, a tenken runs five times his speed. If he takes the Run feat, he can run six times his speed when unarmored and unencumbered.

Sidestep: At 10th level, a tenken react to clumsy foes attacks and leap to a more advantageous spot. When a melee attack against the tenken misses, he can make a 5 foot step to an adjacent square. Your movement does not provoke an attack of opportunity for the opponent who missed the attack, but it does provoke attacks of opportunity for all creatures whose threatened square you left. In addition, you get a +4 dodge bonus to Armor Class against attacks of opportunity caused by using this ability. If the opponent who missed his attack had additional attacks to perform, those attacks are forfeit unless he can get within attack range.

Skyward Jump (Ex): At 11th level, a tenken’s jumping distance (vertical or horizontal) is no longer limited according to his height. This ability only functions if the tenken is unarmored and unencumbered.

Unbound (Ex): At 18th level, a tenken acts as if he is permanently under the effect of a freedom of movement spell.

Shinsoke (Ex): At 20th level, the tenken moves with such speed that it defies reality. He is now permanently hasted. Multiple haste effects do not stack.

Religion: The devotion of a tenken to any religion is completely variable. Some are faithful; others spurn religion completely. Those that do worship a higher power favor chaotic entities that represent battle and, for more evil tenken, wanton destruction. Even those tenken usually worship sporadically and nonchalantly, acknowledging their deity more through oaths and curses than actual prayer.

Other Classes: Most tenken have little taste for law; while they may be tolerant of lawful entities, even the most open-minded of tenken have little interest in conformation to strict rules. But while they may not understand the reasons for a paladin's code of conduct, a tenken will appreciate the paladin's abilities and contributions to a group. They treat all others in a similar manner, respecting them so long as they add something valuable to a group effort.

Combat: With his speed and elusiveness, a tenken is a formidable melee combatant, and with his high Dexterity, he is usually not too shabby with ranged weapons either. But despite his combat skills, a tenken is not the ideal protective character. His fighting style is based on lightning-fast moves and dependent on his ability to weave through a line of foes. As a result, he is often unable to keep another party member from harm unless he can attract all of the enemy's attention.

Advancement: Tenken multiclass well as rogues, naturally favoring Dexterity and agility. Evil tenken might even has a level of assassin, making their living as hired killers. Tenken with high Intelligence or Charisma may also venture into the wizard or sorcerer classes, supplementing their skills with magic.

Tenken are elite swordmasters that pride themselves on the excellence of their craft. With this combat experience comes a fondness for slashing weapons, an interest that can range form appreciation to downright obsession. A typical tenken carries at least three weapons on his person, usually for situational use. The smallest (usually a dagger) will be concealed. Even a tenken can recognize the need for subterfuge. But the other two blades will be as large and imposing as possible in order to deter (or perhaps attract) challengers. When questioned on the subject, a tenken will usually respond with a grin and a knowing wink, suggesting that their show of arms is most likely for the latter purpose.

Daily Life: Nomadic at heart, tenken seem possessed by irrepressible wanderlust. Their hedonistic, carefree personalities also tend to get them into trouble; many of them accrue high debts through heavy gambling and other rash behaviors. To them, none of it really matters. They're just passing the time between the next fight.

Notables: One of the most powerful tenken is a wanderer by the name of Himura, who seeks to help common folk through the use of his sword and combat evil wherever it may rear its ugly head.

Organizations: No organization of tenken exists. Should two tenken meet, however, they will usually both insist on a personal duel; the lethality of this sparring match is dependent on their alignment.

NPC Reactions: Despite not having a great deal of talent outside of the battlefield, tenken are often able to amuse audiences with displays of speed and precision with their weapons. They are usually loathe to do this, however, and rarely if ever give repeat performances.

Characters with ranks in Knowledge (local) can research tenken to learn more about them. When a character makes a skill check, read or paraphrase the following, including information from lower DCs.

Tenken in the Game[edit]

Whether he is a mercenary, a vassal to a feudal lord, an agent of some other higher power, or even a simple wanderer, the tenken is often underestimated at the peril of his enemies, but recognized by those who know of him as a fearsome warrior.

Adaptation: In a more strictly lawful setting, tenken could be adapted to be lawful guardians of the peace. Their natural entropy is not a rule, but merely an observation of typical behaviors.

Sample Encounter: Tojiro, a 12 level tenken, is hired by another party to test the capabilities of the PC's. He has orders to use nonlethal force, but will not abide by them if he feels that his life in endangered. Tojiro is intended to be a challenge for a party of 4 level 9 PC's.

EL 9: Tojiro enters by helping the PC's deal with another threat, preferably something of low level so he will not have to reveal his capabilities. He will respond to this threat with ruthless precision, and then approach the PC's with an entreaty of peace before explaining his intent to challenge them.