They are look like humanoid aliens that have a unique alien shaped head , 2 eyes with either the color of Yellow, violet and Red. The have Yakut accents. They only survive on water. They are neither male or female as they have no sexual parts but instead are genderless though they have talk and act like males they reproduce via eggs so they resemble the namekians. Sykers have keen intelligence and are very smart. They are considered apex predators thanks to their technology. They fight with laser rifles and jet packs.

The Sudmarians are smart, cunning and Dare Devils they have keen intelligence.

The Sykers are Neither rich or poor and like to develop with technology. They reproduce through being spitting out as eggs and are neither male or female though they do have male voices.

They like the Osarans, Hylvoran, Alterran, Elves, and dwarfs the most. They are suspicious of humans and despised goblins.

The Sykers were born on the planet Cycorn they were created by evolution from a species known as the lazarai. When the species were in the middle ages the planet was ravaged by wars with goblins that lasted until the renaissance age were the goblin were fleeing from Cycorn through a magic portal when they were close to extinction and the Sykers ushered in the era of silence a age of peace and salvation. They have invented many advance technology for war, civil and resource usage. They now travel the stars for relics of the void gods.

Syker names are a mix of Siberian tribes, magic: the gathering elves and draenei from warcraft.

Sykeran (a mix of Icelandic and Egyptian)

Keen Will Can't have mental Disorders.

Soldier and operative and mystic 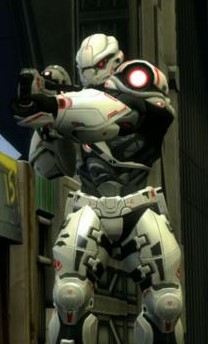 This race was inspired by Shannara, horizon zero dawn, Lord of the rings and Divinity. this a race is for a alternative starfinder universe called "Starfinder Dark conflict" it's a more mature themed saga about a 6 way war conflict between the Stellar League-pact worlds coalition, azlanti star empire, the Veskarium, the swarm, the confederacy (an alien empire known as consisting of the Hel'Kang (a race that looks like the elites from halo), Cabal (who look like there name sake from destiny), Apex (a mix of separatist droids from star wars, faro chariot corrupters and deathbringers from horizon zero dawn, vex from destiny and omnics from overwatch)), the sectoids (who look like their namesake from xcom) and Charon (from my Vanguard (Starfinder Race) race wiki page I made in Pathfinder page of the D&D homebrew site you're reading right now) and the Eternal shadows (who looks like the dark makers from Jak 3) with Starfinder Dark conflict having more extra stuff like more races, classes, lore and some details about some unexplained stuff with one being that the Absalom station was built before the gap. The Stellar league is a allied faction of Pact worlds.