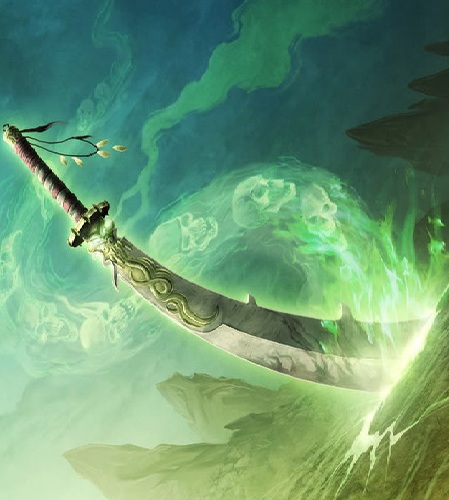 A Sword Specialist LOVES swords. He polishes his sword just to see it shine, he respects his sword and cares for it. It's his treasure, and while it may break, or he may loose it in battle, he will always love his sword. If a Sword Specialist is met somewhere in the wild, it will normally be because he's searching for some sort of legendary material to make a sword out of.

Usually only fighters will pursue this class, especially ones that love swords. The main skill for this class besides Strength, is Wisdom. Wisdom enhances a number of the Sword Specialist's sword abilities.

Wolf's Fang: As a standard action, your sword howl's and lets out a blast of air with your swing. You swing hard enough you strike multiple opponents. This attack is a 20ft cone, and deals (Your level)d6 damage + your sword damage to everyone inside the cone. Creatures inside get a reflex save (DC 10+Your Level+Your Strength Modifier) for half damage.

Sword Flurry: As a full round attack, you strike with your sword using the Flurry of Blows ability of a 11th level monk.

Razor Slash: As a standard action, you attack a single creature you have a clear line of sight on. The creature must be within 20ft and 80ft away. You strike with a single melee attack, but this attack deals double damage.

Falcon's Claw: You drop down on your opponent, from at least 20ft in the air, and attack as a standard action. Your attack deals triple damage, and the creature must succeed a Fort save (DC 10+Your level+Strength modifier) or be knocked prone. You can't jump down from an ackward position, meaning a flying creature can't carry and then drop you to perform this attack.

Demon's Run: You make a bullrush attempt with your sword. The rules are the same, except you get a single attack when the bullrush connects, and the creature you hit is flung 1.5 times farther then normal.

Mage Bane: Also called "Fucking Wizards!", you make an attack against an adjacent, spellcaster opponent. You deal normal damage if the attack hits and you also take away 1 spell per day or prepared spell of a spell level equal to your level or lower. If you use this ability and then miss to hit or strike an opponent that is not a spell caster, it still counts as one use of this ability.

Impaling Sword: You throw your sword as a standard action, it has a range of 30ft and deals normal damage, but your crit multiplier is increased by one. If you critical with this attack your sword impales the target.

Sword Rush: You can activate this ability as a full round action. Your speed increases by 10ft per Sword Specialist level, and you become hasted. This power lasts a number of rounds equal to twice your sword specialist level + your wisdom modifier. You cannot use others sword techniques while using this one, but you can end Sword Rush as a swift action.

Sword Quake: You smash the ground with your sword causing it to shake with kinetic energy you just released. This takes a full round action. Anyone within 40ft has to roll a Fort save (DC 10+Your level+Your Str Mod) or fall prone, except you.

Sword Breaker: Your sword sharpens, and you ignore hardness of 5+your level, or lower. This ability is used as a swift action, and can be used against an object or a sunder attempt.

Ultimate Slash: You make one attack as a full round action, you incur an attack of opportunity, and if any hit you this attack fails. You deal normal damage, with a doubled crit multiplier, however, your sword is considered vorpal for this attack.

Greater Sunder: Requires: Greatsword Sword Type. You make a sunder attempt as a fullround action, you get an additional +4 to this attempt. With your Greatsword, you sunder the targets armor and shield, plus anything they're holding, plus any one additional object on the target. You only make one sunder attempt, which applies to all the objects listed.

Perfect Aim: Requires: Bastardsword Sword Type. You take greater aim at your target. You get a +4 to your attack roll, this stacks with your normal bonuses, and you can still make a called shot while using this power. Activating this technique takes a swift action.

Sword Scream: Requires: Two Weapon Fighting, and two weapons of your weapon type. You clang your swords together, mimicing the "Greater Shout" spell.

Wounding Strike: Requires: Dagger Sword Type. You make a full round attack with your dagger. During this attack your dagger is treated as having the "wounding" magical enhancement.

Sword Specialist in the World[edit]

Sword Specialist in the Game[edit]