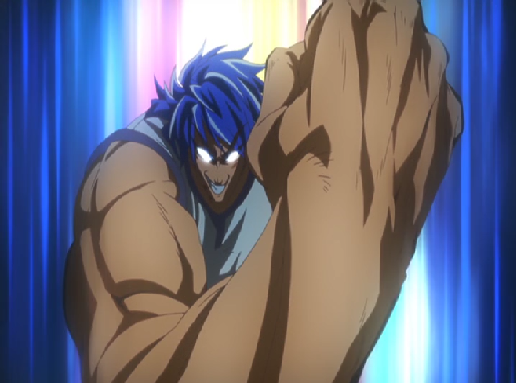 The Strong Man is a melee focused class, but for those with a high strength already, the idea of throwing a dragon becomes a little more possible. Strong Men are MADE for strength, a single punch from them can shatter armor, not to mention what they can do with a sword.

Usually it's fighters and barbarians that enter this class for a little boost. It isn't impossible for other classes but the strength requirement and the feats needed sometimes limits the class too much for rangers or paladins.

Balls To The Wall: At 1st level, a Strong Man no longer adds his Dex bonus to Ac, and instead adds his Str bonus. He looses his Str bonus to Ac just as he would his Dex, if Flat-Footed or Etc. Also, you no longer add your dex mod to your reflex saves, but instead you add your strength mod. In addition, you replace your Dexterity initiative with a new Strength initiative, replacing the dexterity modifier with now your strength modifier.

Fast Movement: A Strong Man gains increased speed as he levels up, due to his strength.

Unarmed Strike: A Strong man is treated armed even when unarmed, and can use Imp. Sunder and any other "Weapon Required" feats with his bare hands. The damage of a Strong Man's Unarmed Strike increases as he levels.

Incorruptible Soul When you would be affected by a mind­influencing spell or effect, you can choose to take physical damage instead. You take 1d6 points of damage per spell level of the effect. This damage is automatic and not subject to DR or SR. You may not use this feat if you are unconscious. You may use this feat a number of times per day equal to half your level.

Adamantine Muscles: A Strong man has developed muscle fibers so dense, they become as damage resistant as adamantine. You gain damage reduction equal to the amount of your Strong Man level + 1/2 your characters career level.

Strength Speciality: At 10th level, the DC for anything involving Strength (Skill Checks, Strength Checks, ETC) is lowered by 10 for the Strong Man.

The Strong Man can fill in the role of any Fighter or Barbarian.

Combat: The strongman operates much like a monk, but uses his/her extreme strength and speed in order to put foes in a trembling state.

Advancement: A character with this class may favor the Monk class due to the flurry of blows effect with the strength and speed of the strongman. If a player wishes to reach maximum potential in just strength, the player may also select the prestige class "War Hulk". The added strength to this character benefits in AC and in Reflex saves.

Resources: Strongmen players tend to portray strength and arrogance over thinking. This usually leads to being known as an asshat by the rest of the party or group.

Most strongmen feel as though they are more than others. You may find them as arena champions or personal bodyguards to royal members. Strongmen are far and even fewer between, so the chance of encountering a strongman means that the shrak is going to hit fan. You do not want to be on the opposite sides of these individuals, so do what is necessary to keep on their goodside.

NPC Reactions: Most NPC's don't realize that a character is a strongman until combat starts. Some have claimed to see their foes crushed before the strongman even reaches their target, as though the light itself cannot flow fast enough to keep along with the sheer speed of strongmen.

Characters with ranks in Knowledge (History) can research Strongmen to learn more about them. When a character makes a skill check, read or paraphrase the following, including information from lower DCs.

Strongmen in the Game[edit]

Strongmen take point on a battlefield. A strongman pours an aura of strength into the hearts of their allies, and so they lead their compatriots into battle with the upmost determination for victory. They do not fear death in battle, as they know it is the will of the gods who collect them. They await glory in the afterlife.

Adaptation: If your DM allows it, your strongman will become your most formidable melee inducing ally.

Sample Encounter: You may only find one strongman in a campaign, and they are usually at the sides of high kings, or champions in continental fighting events.