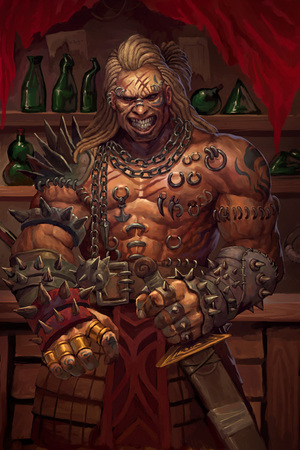 A Spiked Warrior with a little bit of customization, probably about to smash that sword he's holding to tiny pieces

A lone man enters the battle, and as his enemies turn to face him they cower in fear. Covered head to toe in spikes, they wouldn't dare approach him...which is why he brings the battle to them. With no weapons but armor on his back and gauntlets on his fists, he races through the battlefield impaling all in his path. To the few men who dare to to attack them, he thrusts towards them and lets the spikes do the rest.

The Spiked Warrior is a fighting class that specializes in using only spiked gauntlets and armor. Battle-hardened races love this class the most, but there are the few exceptions who rise to the challenge. Size is no issue, as smaller races might have an advantage with reflexes and speed, and larger ones with damage. More than anything, Spiked Warriors are those who love the thrill of the fight, and never back down from a challenge.

Spiked Warriors are usually former human or dwarf fighters who love to get up close and personal in the fight, however a lust for battle has been known to cross class and racial barriers.

Spiked Strike (Ex): The Spiked Warrior becomes extremely proficient with his spiked weapons, allowing the critical multiplier on his spiked gauntlets and armor to increase to x3.

Fearful Spines Ex): At the 3rd level a Spiked Warrior begins to grow in the mastery of the spikes, as enemies naturally grow fearful of you during battle. A spiked warrior may feint as a move action, making an Intimidate check against an enemy's Concentration check. This ability requires a pair of spiked gauntlets and spiked armor.

Fearful Defense (Ex): At the 4th level, a Spiked Warrior becomes so intimidating that enemies naturally hold back on their attacks. A Spiked Warrior gains a +3 Damage Reduction against Simple, Martial, and Exotic weapons. This ability requires a pair of spiked gauntlets and spiked armor.

Spiked Mastery (Ex): A Spiked Warrior becomes so efficient and familiar with his spiked weapons and armor that he is able to deal more damage with them. The damage die for Spiked Gauntlets and Armor increases by one (for example, a 1d4 becomes a 1d6). This ability requires a pair of spiked gauntlets and spiked armor.

Combat: Spiked Warriors are usually the first ones to rush into combat when they get the chance. They love the thrill of the fight, and dare any enemy to attack them.

Advancement: Due to the spiked weapon and armor requirements, Spiked Warriors work best by continuing as a fighter or barbarian, though multiclass options are available for those who have a specific type of character in mind.

Resources: Spiked Warriors usually don't interact with each other, if only because they are few are far between. They can function as a member of a group or party, though they don't want anybody to interfere with their fights.

Spiked Warriors in the World[edit]

Spiked Warriors in the Game[edit]