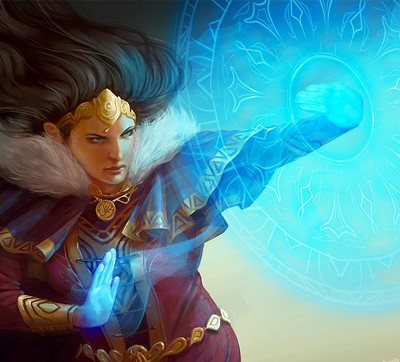 Spell Breakers are sorcerers and wizards who, through sheer arcane mastery, have dedicated themselves to disrupting others from using magic against them or their comrades. They typically specialize in Abjuration magic, nullifying hostile spellcasters whilst freely slinging Evocation spells across the field. Spell Breakers often follow their path for a philosophical purpose, with most believing that reckless use of magic brings harm onto the world. Though uncommon, it is also possible for Spell Breakers to malevolently believe that all the magic in the world is theirs only to wield.

Spontaneous Counterspelling: A level 1 Spell Breaker can Counterspell a spell using any spell he knows provided they are on the same level or higher.

Spell Bender: A Spell Breaker may choose to attempt a counterspell making a Spellcraft check with double the spell's level, and instead of simply cancelling the spell, he can redirect it to anyone he chooses. The Spell Breaker must roll for the attack again, but gains a bonus equal to half the original caster's spellcasting modifier.

Arcane Ruin: Whenever someone gets countered by a Spell Breaker, he must roll two Will saves equal to the DC of the spell that the Spell Breaker used to counter the spell. On the first failed roll, he who got countered is unable to cast any spell for one round (1d2 rounds on the 7th and 1d2+1 on the 9th Spell Breaker level). For the next check, a failed save would mean the opponent takes 1d6 typeless magic damage for every level of the countered spell. For example, if a wizard casts a 6th level spell yet is successfully countered by a Spell Breaker, the wizard rolls two Will saves; if he fails both, the wizard is unable to cast any spell for 1d2+1 rounds and takes 6d6 points of typeless magic damage. This is not applied when spell bending or with reverse metamagic and dispel magic.

Reverse Metamagic: A Spell Breaker can attempt to cancel a single metamagic feat added to a spell instead of the whole spell, by making a successful Spellcraft check equal to (15 + the spell's level + (the metamagic level increasement)X2) you can provide a spell slot equal to the increasement of the spell's level by the metamagic and cancel it's properties. For example, a Spell Breaker attempts to dispel a maximize spell metamagic feat, he succeeds on his spellcraft check and because the maximize feat has a level increasement +3 he burns a 3rd level spell slot and cancels the feat, the spell then continues its effect normally but without the maximize metamagic feat.

Antimagic Shield: A Spell Breaker can cast a shield as a reaction 1/day for ever three level he posses in the Spell Breaker class that grants magical damage reduction 60 for as long as he concentrates. The shield burns a random spell slot for every 20 damage dealt to it on a single attack (roll a d10, if you roll 10, reroll). For every spell slot burnt this way, both the damage reduction and the damage needed for a new slot to get expended are reduced by 5 (to a minimum of 5). If the Spell Breaker runs out of spell slots, the antimagic shield vanishes.

Neutralize Magic: A Spell Breaker at this level can suppress the powers of magic items for long periods. The magic item is allowed a Will save with its wielder's Will modifier, or if unattended a simple d20 against (15 + the Spell Breaker's Int modifier + half his Spellcraft ranks). On a failed save, its powers vanish for 1d10 days. Items of divine origin or powerful artifacts are not affected by this ability. Items of legacy are affected no matter their origin but get a +10 to the suppression check. The bonus from Natural Counterspelling applies.

Counterspell Mastery: A Spell Breaker can now attempt a counterspell as many times as he wants without being "ready," BUT he must be able to see the source of the spell to do so.