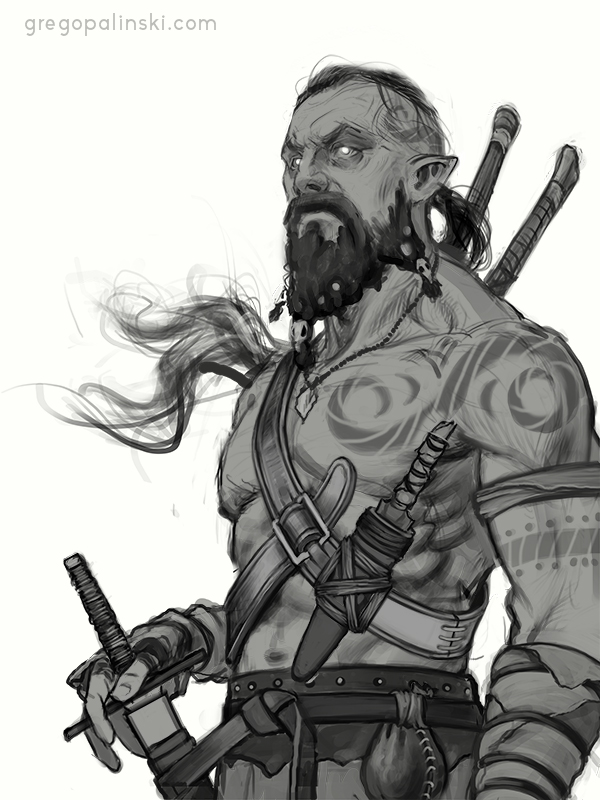 Marked warriors, soul wanderers have been traumatized as youngsters. A soul wanderer borns as a child suffer supernatural trauma (your family murdered by ghosts or demons for exemple), as result of this encounter, they Sword are full of tormented souls (family, friends or whatever you want). This makes the weapon UNIQUE and defines the wanderer, wanderers cannot use any other main weapon.

A Soul wanderer is completely dedicated and defined by his Sword, his victory or ruin comes from the instable relation with his weapon. They make excellent front line fighters, observers and scout for more fragile party members. If a soul wander choose another class or change his alignment for a non-chaotic, his class feats and sword cannot be used anymore (and he can't gain any experience as a Soul wander).

Abilities: Strengh and Dexterity are the most important abilities, wisdom are important too for higher AC BONUS (since you can't use any armor)

Races: Any humanoide race that can have connection with the supernatural.

All of the following are class features of the Soul Wanderer. Weapon and Armor Proficiency: Wanderers are proficient with their Sword, but no armor (cloth only) or shields. When wearing armor, using a shield, or carrying a medium or heavy load, a SW loses their AC bonus, as well as their fast movement abilities.

AC Bonus (Ex): When unarmored and unencumbered, the SW adds her Wisdom bonus (if any) to her AC.

These bonuses to AC apply even against touch attacks or when the SW is flat-footed. The SW loses this bonus when he is immobilized or helpless, when he wears any armor, when he carries a shield, or when he carries a medium or heavy load.

If anyone but the SW attempts to use it, treat it as if it was four sizes larger; If another person gets their sword and tries to use it on its owner, the sword simply passes through it.

If a Soul Wanderer uses any weapon other than their sword, they lose all their class abilities until they draw it out.

If a SW loses their sword or its broken they have to recover or rebuild it imediatly, the sword spirits are connected with the Wanderer mind and long periods without the sword cause hallucinations (1 day).

If a SW is separated from his sword he can summon it to his hand. Summoning takes 1 minute.

Wanderer Class principal feature, the bond connection with it's own weapon. Everynight before sleeps the wanderer must enter 1 hour of meditation and communication with the spirits trapped in the weapon. The results of the meditation depends on the perform during the day, if the SW almost die or takes too many hits the sword becomes unstable and require a Roll Check for the next day, the DM decides the level of difficulty based on how much the sword rages. The Dex, Char, Wis Mod are added to the roll check, if the SW fails in the check he suffers -2 penalty for Wanderer skills and attack rolls (if the SW rolls 1 he cannot use any of his class skills for the rest of the day). If the SW rolls a 20 he gains bonus for the next day (+2 BAB and +2 Damage). If for any reason the medidation for calming the blade can't be done the penalty will apply for the next day. At the beggining of the game the player must choose a creature to be marked, this creature must be connected with the background of the class and be the cause of the Supernatural trauma. Encounters with the choosen creature influences the will of the blade, the wander must roll check his will (with high difficulty), if the roll fails the blade's rage surpass your will and the Wander must attack the creature (-4BAB).

Endurance: At level 1 Sw gains Endurance as a bonus feat.

Uncanny Dodge(Ex): A Soul Wanderer can react to danger before his senses would normally allow him to do so. He retains his Dexterity bonus to AC (if any) even if he is caught flat-footed or struck by an invisible attacker. However, he still loses his Dexterity bonus to AC if immobilized. If a SW already has uncanny dodge from a different class she automatically gains improved uncanny dodge (see below) instead.

Sword As Shield(Ex): At 3rd level, a SW has become proficient at defending with a sword as well as attacking. He gains a +1 deflection bonus to AC. This bonus increase +1 every 3rd level, to a max of +6. (+2 at 6th, +3 at 9th, +4 at 12th, +5 at 15th, and +6 at 18th.) This bonus to AC applies even against touch attacks or when the SW is flat-footed. The SW loses this bonus when he is immobilized or helpless, when he wears any armor, when he carries a shield, when he carries a medium or heavy load, or when the SW does not have his sword drawn while both hands are occupied. If the sword is not drawn, but has at least one hand unoccupied, he automatically uses Quick Draw and retains the bonus to AC

Ki Strike(Su): At 4th level, a wanderer deeps the bounds beetween his minds and the spirits in the sword, he gains Ki Strike when attacking with his sword (magical).

Spirit Comprehension: As the Wander starts to understand the souls in it's blade your bond with the spiritual world grows as well. Now he can roll check for detect unuusual feelings in the spirits in the area, his sword will warn him for massive concentration of spirits, rage or peacefull places --> difficulty 15/d20+ relative bonus of last night meditation (if last night DICE was 16 the bonus is +3 for exemple). If the meditation roll was negative AND the roll check fails the sword lies about the condition of the spirits and the wander must Roleplay as if it belives.

Improved Uncanny Dodge (Ex): At 6th level, can no longer be flanked. This defense denies another SW the ability to sneak attack the character by flanking him, unless the attacker has at least four more SW levels than the target does. If a character already has uncanny dodge (see above) from a second class, the character automatically gains improved uncanny dodge instead, and the levels from the classes that grant uncanny dodge stack to determine the minimum Ronin level required to flank the character.

Spirit Dominance: At level 6 the Wanderer can use the will of the blade to force a ghost, soul or spirit to help him for one task (similar to druid skill to call animals for help). After the task is done roll check with 15 DC(+meditation bonus), if fails the ghost attacks the party. This skill can be used X times per day (Wanderer level/6, level 6 = 1 times, level 12 = 2 times...) and cannot be done if the meditation check have failed last night.

Sword Focus: At 8th level, a SW gets Weapon Focus as a bonus feat.

Ki Strike(Alignment): At 9th level, a SW Sword is treated as his alignment for overcoming Damage Reduction.

Mind as Blade: At level 11 the wander starts to connect his inner spirit with the tormented souls in the blade. He can connect his Personality with the will of the blade for great bonus damage (your Str Mod as Bonus damage), This skill can be used X per day depending on the meditation roll (-10-->0/ +12-->1/ +16-->2/ +20-->3 without MOD bonus), and lasts the duration of the combat. When this skill is active the player loss the Wis AC bonus AND your Sword as Shield Ability.

Special => If the Wander happens to encounter the marked enemy the will of the blade surpass it's own and forces the connection, the player loses control of actions and must attack(without the roll check and -2BAB).

Ki Strike(Adamant): At 15th level, a SW Sword is treated as an adamantine weapons for over coming damage reduction and bypassing hardness.

Blade as Mind: At level 16 the Wander begin to control and surpass the will of the souls, the connection of "Mind as blade" can always happen now 3 times per day. The roll check for calming the souls at night cannot fail and it's made only for the purpose of checking a 20 roll. Special --> The marked creature no longer causes the rage of the blade and it's bonus and penalties are irrelevant, the wander can think wisely and choose to engage combat or not.

Body as Blade: At level 20 the Wander reaches the ultimate connection with it's blade, now the blade is invisible to another persons as long it's not summoned yet, and it's summoning to it's hand is a free action in combat or 5 takes seconds outside battle; One time per day the Wander can reach the supreme connection and change it's body shape, your eyes turn white (AC from Wis and sword as Shield bonus are lost for the duration) and it's skin shows red drawnings from the souls encarved in the sword. Apply the Str,Dex and Wis mod in your Sword damage. This skills take 1 turn to charge and last the entire battle. As HP of the wander reaches 0 the blades souls assumes control of the body to save it's owner, this skill grants the wander 1/3 HP points for 4 turns duration (if this happens the "body as blade" skill cannot be used anymore in that day). Now the marked creature does not affect the wander nor the blade anymore.

Spirit Gather: As the boundries of human and soul are broke by the use of "Body as Blade" the wandering spirits around the area will gather around the united will of Wander and Blade to help his objectives (d20 mod decides the number of ghosts found). The attracted ghosts will always tries to hit the last enemy hitted by the Wanderer and will dissipate after the battle conclusion. If the Wander hits 0 HP while the ghosts are still in battle they go rampage and attack the rest of the party.

Bonus Feats: The epic SW gains a bonus feat (selected from the list of epic Fighter bonus feats) every two levels after 20th.

Soul Wanderers in the World[edit]

Soul Wanderers in the Game[edit]