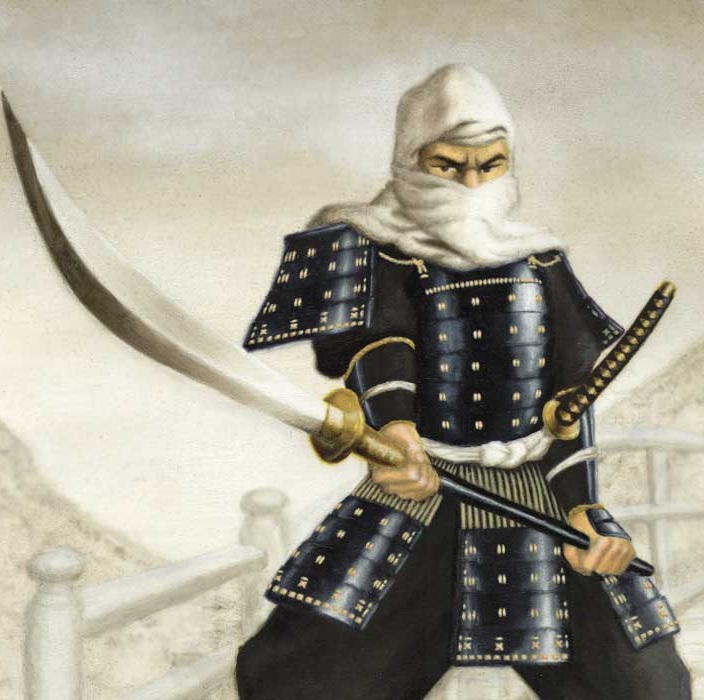 A Sohei poised and ready for battle.

All of the following are class features of the sohei.

Weapon and Armor Proficiency: A sohei is proficient with all simple and martial weapons and with all armor (heavy, medium, and light), but not with shields.

Bonus Feats: At 2nd level and every two sohei levels thereafter (4th, 6th, 8th, 10th, 12th, 14th, 16th, 18th, and 20th) a sohei gets a bonus combat-oriented feat. These bonus feats must be drawn from the feats noted as fighter bonus feats. A sohei must still meet all prerequisites for a bonus feat, including ability score and base attack bonus minimums, but is considered a fighter for the purposes of meeting these prerequisites.

These bonus feats are in addition to the feat that a character of any class gets from advancing levels. A sohei is not limited to the list of sohei bonus feats when choosing these feats.

Ki Power (Su): A Sohei can channel his ki to manifest special powers of martial prowess and skill. He can use his ki powers a number of times per day equal to one-half his class level (minimum 1) plus his Wisdom bonus (if any). As long as a Sohei’s ki pool isn’t empty (that is, as long as he has at least one daily use remaining), hhe gains a +2 bonus on his Will saves. A Sohei’s ki powers are ki focus, aiki swing, harmonizing strike, aiki whirlwind, and kiai sweep. Each power is described under a separate entry below.

Ki Focus (Ex): Starting at 2nd level, a Sohei can spend one daily use of her ki power to focus herself and strike a foe with a flurry of swift attacks. The Sohei can flurry of blows with a full attack action in melee, making one extra attack per round while suffering a -2 penalty on every attack. At 10th level, the Sohei no longer suffers a -2 penalty to her attacks when he makes a flurry of blows attack with Ki Focus.

Strength of Mind (Ex: A sohei of at least 5th level is immune to stunning and sleep spells and effects.

Aiki Swing (Ex): Starting at 6th level, a Sohei can spend one daily use of his ki power to strike at his opponent with a wide-arcing attack as a full-round action. If the attack succeeds, in addition to dealing regular damage, the blow unbalances the target so much that it provokes attacks of opportunity from creatures threatening its square.

Harmonizing Strike (Ex): Starting at 8th level, a Sohei can spend one daily use of his ki power to perform a ki-harmonized strike as a standard action. In addition to dealing normal damage, this attack disrupts the flow of arcane and divine energies. If the Sohei successfully strikes a target under the effects of a spell or spell-like ability, he can attempt to dispel it as though he were making a caster level check, rolling a d20 and adding the amount of damage he rolled in the attack.

Mettle (Ex): The sohei's special training allows him to shrug off magical effects that would otherwise damage or harm him. If a sohei of at least 9th level makes a successful Will or Fortitude saving throw that wouldn ormally reduce the spell's effect, he suffers no effect from the spell at all. Only those spells with a Saving Throw entry of "Will partial," "Fortitude half," or similar entries can be negated through this ability.

'One Strike, Two Cuts' (Su): At 15th level, a sohei gains the ability to strike with uncanny precision and speed. The sohei may become hasted for 1 round per sohei level per day. He may be hasted on a number of different occasions during any single day, as long as the total number of rounds spent hasted does not exceed his sohei level.

Timeless Body (Ex): Upon attaining 17th level, a sohei no longer takes penalties to his ability scores for aging and cannot be magically aged. Any such penalties that he has already taken, however, remain in place. Bonuses still accrue, and the sohei still dies of old age when his time is up.

Aiki Whirlwind (Ex): Starting at 18th level, a Sohei can use his Aiki Swing as a part of a full attack action.

Kiai Sweep (Ex): Starting at 20th level, a Sohei can spend two daily uses of his ki power to perform a series of fast and powerful attacks as a full-round action. The Sohei makes a full attack with a -2 penalty to all his attack for the round so that he may target one additional opponent with each of his attack rolls.

Bonus Feats: The epic sohei gains a bonus feat (selected from the list of epic fighter bonus feats) every two levels after 20th.