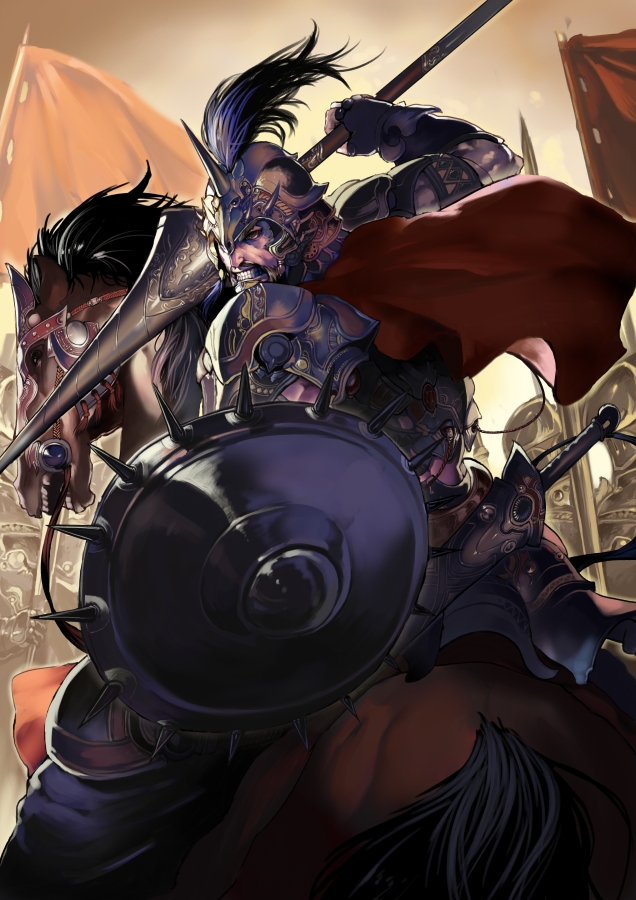 I do not aim with my hand

He who aims with his hand has forgotten the face of his father.

I aim with my eye.

I do not shoot with my hand

He who shoots with his hand has forgotten the face of his father.

I shoot with my mind.

I do not kill with my gun

He who kills with his gun has forgotten the face of his father.

I kill with my heart.

-- Litany of the Gunslinger

Knights of the Eastern Kingdom constitute a highly trained order of generals, lawmen, and diplomats who keep the peace, protect the helpless, and serve the White.

Knighthood is a hereditary office, passed from father to son among the Lord of Stone and Sea. Knights are trained from early childhood in a centuries-old martial art, along with many other skills that it is needful for them to know. After many rigorous tests, the knight must face his combat instructor in single combat. If he succeeds, he is knighted by his lord (usually his father). If he fails, and lives, he is exiled -- sent into the far West, never to return on pain of death.

A Knight serves his lord, his liege-lord the King, and the laws of knighthood, which are specific and exacting. These include, but are not limited to:

A knight may not refuse any request for needful aid made in good faith.

A knight may not take payment for his aid.

A knight will keep his oaths, even beyond the end of the world.

Knights, as one might imagine, have little free time. They travel constantly, keeping order in the kingdom, settling disputes, and showing the colors of the king in distant lands.

The Role of the Knight[edit]

Knights are the natural leaders of a party, if for no other reason than that they must pursue their mission and be at the command of their lord. A knight could participate in an extended quest, away from his normal duties, in service of the White.

Knights are known throughout the east of Middle Earth. Good folk respect them. Evil creatures fear them greatly. A fully-fledged knight is widely regarded as virtually unkillable by friend and foe alike (and not without reason). Their word is unbreakable, and they bear the seal of the High King. Hence, they naturally become the voice of the party to authority. This lends great weight to a party's presence -- they are unlikely to lack invitations to lodging and meals in any civilized town -- but his presence is also a double-edged sword, as his code is well known and disputes, mysteries, and pleas for help will seek him and his companions out wherever they go.

Knights are proud men, and honorable in their own way, but not chivalrous. They are bound by a code, to keep their promises and give needed aid, but not to fight fair or keep the appearance of goodness. They are trained to be hard, ruthless men, and to survive. Many may carry ideas of their own regarding honor and the dignity of their position, and the respect which they are due. These are not a part of the knight's code, however, and the two must be distinguished.

The knight's code and codes of chivalry share some common points: bravery, oath-keeping, and obedience to one's lord are required by both. But while the cavalier's cardinal sins include trickery, the use of "low" methods, and suffering disrespect from others, the knight's are sloppiness, incompetence, and most of all, failure. While influenced by the values of chivalry which are prevalent in noble society, the knight's first duty is to win.

Every apprentice Knight undergoes "the Training," an intensive and extensive study of the Knight's warcraft. He makes this study under the tutelage of a senior retainer, the Knight's master-at-arms (an expert warrior, but not a Knight). Such a study begins when the child is five or six and continues for many years. All but the most talented of apprentices will train for fifteen to twenty years before undergoing the Challenge.

At a time of his chosing, the apprentice must face his tutor, the man-at-arms of the Knight. His is the choice of weapons, and the man-at-arms may not refuse the challenge.

At the completion of the trial, if he defeats the master, the knight receives the sword and the spear and bow of his ancestors, weapons of great lineage and power. If he fails, he is exiled to the West, and struck from the annals of his family.

The man-at-arms template (coming soon) can be used to create the tutor which the apprentice must defeat. He should be a fighter of at least 9th, but more probably about 12th level, with the same sorts of skills and feats as the knights he trains (of course). The man-at-arms will not fight to the death unless he believes the challenger to be unworthy or unprepared for knighthood. Neither will he bow out politely. He must be in real fear of death to cede victory, for example being at 25% hit points while the challenger has more than half remaining.

The place of the challenge is neutral ground, but the choice of weapons is the challenger's. If the challenger is defeated and lives, he is immediately sent forth from his household, not in anger, but in firmness, and may not gain any further knight levels, but may progress in other classes. This is an exception to the rule that knights may not multiclass.

The Arms of the Knight[edit]

Until the challenge, the apprentice is equipped at the pleasure of his lord. Typically, his kit will be chosen for a given mission, when he is given one, and will be of good but not exceptional quality. Anything he might acquire in his travels, before knighthood, is the property of his lord.

The Black Sword: One of a family of swords crafted by dwarven smiths from sky-iron. A bastard sword or greatsword(M or L).

The Silver Lance: A lance crafted by the Noldor of the Hidden City. Its head is forged of mithral, its shaft is ash.

The Dragonhorn Bow: This (composite long) bow is formed of horn, wood, and steel, and is strung with the heartstring of an ancient fire-drake. These bows were made by Ar-Dun himself in the time of Darkness that followed the War of World's End.

The arms of a given knight function as enchanted weapons in the hands of those with the strength to bear them. Knights may unlock their abilities as per the dashimo of the samauri described in OA, with the same level requirements. The treasure requirement can be met by sacrificing treasure to the High King, or in support of a knight-in-training (not a PC), or in charity to a good cause, and it applies only to treasure acquired after assuming the rank of knight. Until improved, the weapons function as ordinary masterwork weapons. They cannot under any circumstances be allowed to be lost.

Though the Training is consistent and exacting in its methods from barony to barony and down through the centuries, knights differ in their aptitudes and their preferences, so their skills and feats may differ, reflecting differences not in what they were taught but in what they learned. There are certain things, though, that no one born into knighthood can keep from knowing, and these are reflected in the class requirements:

All of the following are class features of the knight.

Fighter Feats: The knight may chose feats which require the fighter class as a prerequisite as if they were a fighter of the same level.

The Training: Any weapon-specific feat that the knight takes, such as Weapon Focus or Improved Critical, can be applied to all three of the weapons he was taught from childhood, namely the bastard sword, the lance, and the composite longbow, as if they were a single weapon.

Immune to Fear: A knight of the 12th level is immune to all fear effects.

Unshakable Purpose: As a result of his mental and physical discipline and adherence to his code, the knight, as he advances in level, acquires as bonus feats Iron Will, Leadership, and Diehard.

Weapon and Armor Proficiency: A knight is proficient with all simple and martial weapons and with all armor (heavy, medium, and light) and shields (including tower shields).

Bonus Feats: The knight gains a bonus feat at 2nd level and every four levels thereafter (6th, 10th, 14th, and 18th).Bonus feats must be drawn from the feats noted as fighter bonus feats. A knight must still meet all prerequisites for a bonus feat, including ability score and base attack bonus minimums.

These bonus feats are in addition to the feat that a character of any class gets from advancing levels. A knight is not limited to the list of fighter bonus feats when choosing these feats.