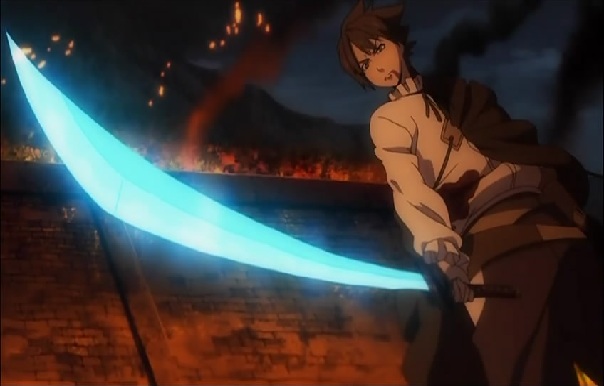 A Sacred Blacksmith with a newly crafted sword.

Craft Magic: At 1st level, a Sacred Blacksmith learns how to create magical weapons and armor through forging. Any weapon or armor created in this way must be masterwork, and a separate craft check must be made, similar to crafting a masterwork item. The Dc for crafting a magical item in this way is 25+5 for each magical enhancement. Meaning a +1 Vorpal sword (+6 enhancement) has a craft DC of 55 for a Sacred Blacksmith. It is possible to add enchantments onto a weapon that is already magical, but doing so adds the base enhancement to the crafting. Adding Vorpal to a +3 blade costs the same as making a +8 magic item, DC 65. Crafting a magical weapon or armor in this way works similar to crafting a normal weapon or armor, see below. Enhancing a weapon, suit of armor, or shield uses up raw materials costing one-half of it's total price.

To determine how much time and money it takes to add magical enhancements, follow these steps.

1. Find the price of the magic enhancement your crafting. Or the total enhancement of the weapon or armor, if it already has an enhancement or enchantment.

2. Pay one-half of the enhancement's price for the cost of raw materials.

If you fail a check by 4 or less, you make no progress this week. If you fail by 5 or more, you ruin half the raw materials and have to pay half the original raw material cost again. The +1 Enhancement from being Masterwork doesn't add into the magical enhancement to determine the price or dc.

Magic Forge: The magical forge is the Sacred Blacksmith's art. He creates a 3ft wide sphere of fire that doesn't burn him. Anyone that enters the square the forge is in takes 1d6/level of fire damage. The forge forms directly in front of the Sacred Blacksmith, and requires him to focus on it completely. Creating the forge is a full round action. Once the forge is created, the Sacred Blacksmith can craft anything as a standard action, as long as he makes the craft dc. Anything forged inside the magic forge however is held together by magic, and only lasts a number of rounds equal to his Sacred Blacksmith level, plus 2 times his Intelligence modifier. It is mainly used to craft weapons, or misc. items.

If the Sacred Blacksmith has the "Craft Magic" Ability, he can create magic weapons, armors, shields, and items using his forge. Doing so requires him to roll to create the item masterwork, then another craft check equal to crafting the same item normally using the "Craft Magic" ability.

Detonate Forge: At 14th level, a Sacred Blacksmith learns to use his magic forge as a weapon. He must still create it as normal, and can only use it if he stands next to it and concentrates. However now he may concentrate to move the forge 10ft, Concentration DC 20. Doing so is considered a move action, and provokes an attack of opportunity. He may detonate the forge as a standard action, causing it to explode with a swell of magic. Doing so causes 1d8/level fire damage to all those within 20ft of the forge, Reflex DC 10+Level+Cha modifier for half damage.

Master Craft: At 15th level, a Sacred Blacksmith no longer needs to roll to create an item masterwork. Anytime he succeeds on a craft check, the item is automaticlly masterwork, furthermore, the DC for any craft check the Sacred Blacksmith rolls is decreased by his Intelligence modifier. If this lowers the DC to 5 or lower, he creates the item as a standard action.

<-What happens (if anything) if characters of this class lose an entry requirement or violate their code of conduct (if this class has one). Delete this section if there are no contingencies for continuing in this class->

Sacred Blacksmiths in the World[edit]

Sacred Blacksmith in the Game[edit]