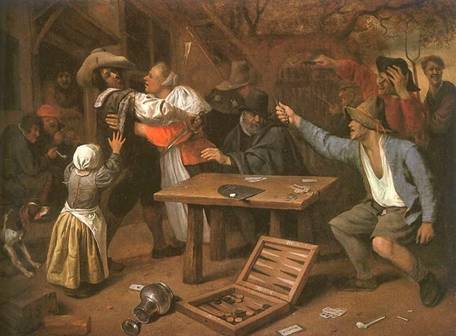 Anywhere that the ruffian goes, there's bound to be someone or other who is in bad need of an attitude adjustment. Whether on the high road or within the seediest tavern, this particular rowdy fellow will find himself his entertainment. Truly, he is often the one at the heart of it, and he will derive enjoyment from the sensation of numbness that takes over after the first few punches hit home. The ruffian brawls because he likes to, with any potential weapon at his disposal, ranging from his own fists, to pieces of furniture, tankards and bottles. Sometimes, even things like clubs or other people themselves find themselves the unvoluntary weapon within the ruffian's hands.

The ruffian is, first and foremost, a melee fighter. Quite ironically enough, it is not very proficient with most manufactured weapons and armor, and will benefit from sticking to blunt weapons, his own fists and whatever he can get his hands onto. Ruffians express themselves through brawling and contending, and will be able to interact quite well with those who share their sentiments, supplanting reputation for their own force of presence in many different endeavours.

Abilities: Strength and Dexterity are important for the ruffian as they represent damage potential and the ability to hit and avoid being hit. A little bit of Intelligence symbolizes the ruffian's wit, and may serve to keep him out of trouble, and Constitution is convenient to have for his endurance and health.

Races: Are there any races that do not occasionally flit out into the dark corners of their societies and descend upon one another in drunken glory? Ruffians are found everywhere.

All of the following are class features of the Ruffian.

Weapon and Armor Proficiency: Ruffian's are proficient with all simple weapons and light armor, and have no proficiency with shields. Still their unarmed attacks are much more useful than most weapons.

Brawling Maneuvers: Being experts of unconventional and improvised fighting a Rufian gains brawling maneuver feats at levels 2, 4 and every 3 sebsequent levels. These manuever will give a Ruffian a repitoire on unconventional but highly effective techniques.

Drunken Euphoria: At level 6 a Ruffian gains the ability to fight more effectively while drunk. This gives the Rufian a +2 to dodge AC and plus +2 to attack rolls because of the unpredictability of fighting drunk. At level 12 the bonus increase +4, and at level 18 they increase to +6

Weapons: A Dwarven Ruffian would use a light mace and perhaps a dagger.

Religion: Generally speaking the Ruffian class worships Olidammara, though as any race may be a Ruffian, almost any deity is possible.

Other Classes: Ruffians tend to have a brotherly relationship with Fighters, but often consider themselves above barbarians, so in-fighting can occur. Any good Ruffian knows the benefit of a Cleric or Spell caster in their party. Ruffians tend to be more chaotic, so they try to avoid Paladins, and favor rogues.

Combat: Typically Ruffians are brute force melee fighters. While a Ruffian may have the intelligence to flank an opponent or employ other strategies, often they just hit the hardest and the thing closest.

Advancement: A ruffian tends to focus on his melee weapons, and work to gain a better use from the weapon. A ruffian will occasionally multi-class into a rogue or ranger, as they can prove themselves more useful than in brute-force combat.

This section is dedicated to the manner in which a Ruffian carries himself in the world.

Daily Life: The daily life of a Ruffian includes drinking, partying, and killing. In any order.

Organizations: Ruffians are often found in bars and taverns, and are often hard to miss.

NPC Reactions: While more snobbish characters tend to look down on them, many other characters love to be around Ruffians.

This section is dedicated to the lore of the Ruffian.

Characters with ranks in Gather Information can research Ruffians to learn more about them. When a character makes a skill check, read or paraphrase the following, including information from lower DCs.

DC 5: The man tells you Ruffians hang about in bars, and often don't leave.

DC 10: If you can beat a ruffian in a fight, he'd be willing to teach you his ways.

DC 15: Ruffians are pretty tough, so you may have a hard time beating one in a fair fight.

DC 20: A few good blows to the knees and even the strongest ruffians are down for the count. Sneaking up on them is frowned upon, and beating them up in this manner will only result in bruises (for you and your friends).

Ruffians in the Game[edit]

This section is dedicated to discussing the manner in which a ruffian fits into a campaign.

Most ruffians do a good job of picking fights for their party, and getting them out of fights with brute force.

Adaptation: Drunken Ruffians can be a fun way to change the character, likewise a sober ruffian can prove rather interesting.