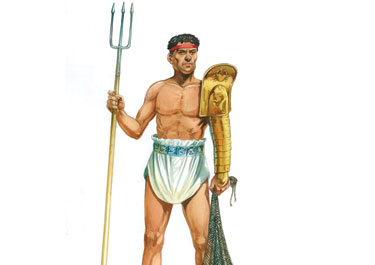 Altough I have thought about making a Retiarius prestiege class for a while, almost all of the abilities and information presented in this class was created by Henry Lockwood with supplemental information provided by Lorenz Lang. The original source for most of this information can be found on the GamesKB site forum here and reblogged on Lang's site here. I take no credit for the work and creativity that these two put into this class, but only intend to make it more known and change it slightly to better fit my campaign.

"A retiarius (plural retiarii; literally, "net-man" or "net-fighter" in Latin) was a Roman gladiator who fought with equipment styled on that of a fisherman: a weighted net (rete, hence the name), a three-pointed trident (fuscina or tridens), and a dagger (pugio). The retiarius was lightly armoured, wearing an arm guard (manica) and a shoulder guard (galerus). Typically, his clothing consisted only of a loincloth (subligaculum) held in place by a wide belt, or of a short tunic with light padding. He wore no head protection or footwear.

"The retiarius was routinely pitted against a heavily armed secutor. The net-fighter made up for his lack of protective gear by using his speed and agility to avoid his opponent's attacks and waiting for the opportunity to strike. He first tried to throw his net over his rival. If this succeeded, he attacked with his trident while his adversary was entangled. Another tactic was to ensnare his enemy's weapon in the net and pull it out of his grasp, leaving the opponent defenseless. Should the net miss or the secutor grab hold of it, the retiarius likely discarded the weapon, although he might try to collect it back for a second cast. Usually, the retiarius had to rely on his trident and dagger to finish the fight. The trident, as tall as a human being, permitted the gladiator to jab quickly and keep his distance. It was a strong weapon, capable of inflicting piercing wounds on an unprotected skull or limb. The dagger was the retiarius's final backup should the trident be lost. It was reserved for when close combat or a straight wrestling match had to settle the bout. In some battles, a single retiarius faced two secutores simultaneously. For these situations, the lightly armoured gladiator was placed on a raised platform and given a supply of stones with which to repel his pursuers." - Wikipedia

Because of its prevalence as a gladiatorial fighter, most retiarii are forced to take this prestige class simply for pragmatic reasons; if you're being forced to fight with a net and trident, why not try to get good at it? However, there are some who willfully choose to become a retiarii. Those who do are usually either fighters or rogues, because of their reliance on mobility and offensive powers, though there are some who were previously scouts. Because of the retiarius's reliance on mobility and his limitations on armor, Dexterity is his most important skill. In addition, a high Intelligence score helps him accumulate necessary skill points and a high Strength score helps him in combat.

Retiarius armor, consisting of leather and metal protection for only the left arm and shoulder, which is protected by a high shoulder guard, is favored by these gladiators. Statistics for this armor can be found in Dragon Magazine #303 or in the Dragon Magazine Compendium, page 116. The statistics are summarized here:

All of the following are class features of the Retiarius.

Weapon and Armor Proficiencies: The retiarius gains no proficiency with any weapon, but he may treat his trident as a light weapon for the purposes of the Weapon Finesse feat. The retiarius gains no proficiency with any armour or shield. He loses the benefit of his special abilities while wearing heavier than light armour, wielding a shield, or while carrying a medium or heavy load.

Improved Net Proficiency: The retiarius has practiced his skill with the net such that he can now throw an unprepared net without too great a loss in accuracy. His penalty for throwing an unfolded net is halved (from -4 to -2). In addition, his net now causes an entangled opponent to lose his Dexterity bonus to AC (if any).

Shift the Footing (Ex): The retiarius gains the ability to make a Trip attack with either net or trident, without suffering an attack of opportunity. He still suffers the chance of losing the weapon if he fails the opposed Trip check.

Fleet of Foot (Ex): Years of keeping out of reach of an opponent have given the retiarius an advantage in his mobility. He gains a +10 ft. enhancement bonus to base land speed at 2nd level. This bonus increases to +20 ft. at 6th level.

Net Defense (Ex): The retiarius can keep his net spinning and twirling, presenting a distracting screen to foes. In any round where his net is unfolded and he does not attack with it, he gains a +1 shield bonus to AC. This bonus increases by +1 every three levels, i.e. to +2 at 5th level and +3 at 8th level.

The retiarius gains an additional +1 to this bonus when using his Combat Expertise feat.

Mobility: The retiarius is treated as having the Mobility feat, even if he does not have the normal prerequisites for that feat.

Strike the Weakness (Ex): The retiarius is an expert in taking advantage when his opponent is tangled in his net. Starting at 3rd level, he gains a +2 bonus to attack rolls against any entangled opponent (including rolls to confirm a critical hit).

Sneak Attack (Ex): This is exactly like the Rogue ability of the same name. The extra damage dealt increases by +1d6 every four levels (4th and 8th). If a Retiarius gets a sneak attack bonus from another source the bonuses on damage stack.

Tangling the Blade (Ex): Starting at 4th level, the retiarius can use his net to hinder an opponent's weapon or shield. He can make a disarm attempt using his net, without triggering an attack of opportunity.

Improved Entangle (Ex): A retiarius of 5th level or higher can use a specially-sized net to deal with creatures of a different size category. He can use a net one size smaller or larger than his own with a -2 penalty on attack rolls, or a net two sizes different with a -8 penalty (so a Medium retiarius could use a Small net, against creatures of size Tiny through Medium, at a -2 penalty; or a Small retiarius could use a Large net against Medium through Huge creatures, albeit at a -8 penalty on attack rolls).

Greater Net Proficiency: Starting at 6th level, the retiarius no longer suffers a penalty for using an unfolded net.

Spring Attack: At 7th level, the retiarius is treated as having the Spring Attack feat, even if he does not have the normal prerequisites for that feat.

Greater Entangle (Ex): By 8th level the retiarius has made his net into a fearsome weapon indeed. He can either entangle two adjacent foes (both within the net's range), or can apply greater penalties to a single entangled foe: -4 on attack rolls, and movement is reduced to 1/4 speed. The Concentration DC for spellcasting increases to 30, and the Escape Artist DC increases to 35.

Never There (Ex): When using his net defence special ability, a retiarius of 9th level or higher is able to confuse his position. He can obscure himself from his designated Dodge opponent as a free action in addition to the AC bonus, granting him concealment (causing a 20% miss chance) or can, as a move-equivalent action, gain concealment from all opponents in a 90 degrees arc.

Deadly Strike (Ex): If a 10th level retiarius succeeds in entangling an opponent and hitting with his trident in the same round, he can treat the trident attack as an automatic critical threat.

Special Ability (Ex): At 10th level the retiarius gains a special ability similar to a Rogue. He chooses from the following list: Crippling Strike, Defensive Roll, Opportunist, Slippery Mind, or a bonus feat.

Bonus Feats: The epic Retiarius gains a bonus feat (selected from the list of epic rogue feats) every three levels after 10th.

<-Where characters of this class fit in a d20 world->

Characters with ranks in Knowledge (History or Local) can research retiarii to learn more about them. When a character makes a skill check, read or paraphrase the following, including information from lower DCs.