Deceitful, power-hungry, and merciless, the rakshasas are feared throughout the world. 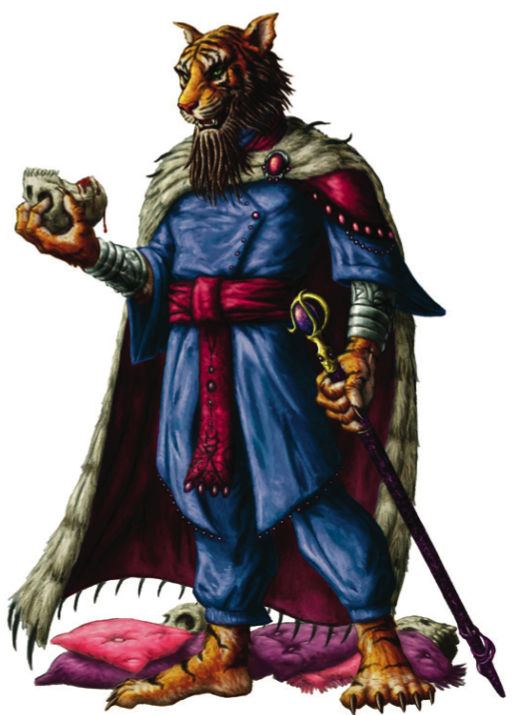 Rakshasas are mainly a race of villains. They lie and manipulate others to serve them. They have a strong taste for wealth and luxury, wearing fine, high-quality clothing and hording treasure. They use their disguising ability to impersonate politicians, crime bosses, and other wealthy or powerful individuals. Their enemies are the devas. If a deva becomes corrupted, they risk being reborn as a rakshasa.

Play as a rakshasa if you want...

Rakshasas are a malevolent race that resemble jungle cats, usually tigers but sometimes leopards, panthers, or jaguars. They stand 6.5 to 7 feet tall, and weigh about as much as dragonborn. Females, called "rakshasi," tend to be a bit skinnier and shorter than males. They have a luxurious coat of fur all over their bodies, and sharp, retractable claws on their hands and feet. Their most disturbing feature is their backwards hands; their palms face outward rather than inward with their hands at their sides. This feature doesn't impede their manual dexterity, though. They can hide their unsettling form at will. This on the other hand, is not something that applies to all of the Rakshasas. There are certain exeptions whom are reincarnated with regularly placed hands.

Rakshasas live a little longer than humans, averaging 90 years but occasionally living to 120. But unlike humans, after a rakshasa has died, he or she will eventually reincarnate somewhere in the world after days, months, or sometimes years of wandering as spirits. They reincarnate in adult bodies, and retain all their memories and abilities from their previous incarnation. Because of this, rakshasas cannot have children. Their life cycle strongly resembles that of their enemies, the devas.

Rakshasas are typically evil, but like with all races, there may be some exceptions. They all behave similarly; using their deceitful ways to gain power and wealth. Rakshasas are also vengeful. Anyone who steals from one or tries to harm one is marked by the rakshasa, who will hunt down and brutally kill the target. They're especially vengeful to those who slew them in a previous life.

Devas are the rakshasas' most hated enemies. The two races have fought each other ever since the dawn of their existence. Some rakshasas are devas whose spirits were corrupted by evil in their previous life, and were punished by being turned into the creature they despise the most. It's unknown if a rakshasa can be reborn as a deva, though, as good rakshasas are almost unheard-of. There are a few devas who claim to be rakshasas who have found redemption, but there's nothing supporting these claims.

It's unknown where the rakshasa race originated. Some people say they were spawned by lesser demons who fled the Abyss. Rakshasas deny this theory, being too proud a race to accept such a degrading origin. However, their behavior strongly resembles that of demons, as well as their virtual immortality. Whatever their origin, they have no homeland in the Material Plane. They live among other races, always hiding their real form and pretending to be a member of a local race.

Mahel is a fallen deva who reincarnated in a strange wasteland with only fragmented memories of her past existences and the knowledge that she had committed an unimaginable sin. As a deva, Mahel was a wizard, a master of learned and disciplined magic. But as a rakshasi, she is a sorcerer, as she now finds that the wild and untamed side of magic comes to her more easily. Mahel was found by a group of treasure-seeking adventurers in the Mournland and she travels with them on a quest to understand both why she has been punished and her own true nature. Her companions believe she is still a deva thanks to the power of her deceptive veil.

Ravana is a rakshasa rogue, but to all but his closest friends and co-conspirators, he is Drago, a quick-tempered human nobleman, and renowned duelist. Boredom has set in, as usually happens to Ravana after years of easy comfort and hardly any mischief. He desires a challenge- a dastardly deed worthy of his name- and so he calls together a group of his closest friends- all black-hearted souls such as himself- with a proposal for an awful, wicked adventure.

By appearance, Kaine is a burly, male, human barbarian. By repute, he is cruel and choleric. But his ferocity as a warrior and his knowledge as a guide make him a valuable companion for any wishing to explore the ruins of Xen'drik. This was reason enough for the adventurers to hire him on in Stormreach. If they heard the rumor that Kaine had been searching the ruins all these years for something in particular, perhaps they had decided it was no business of theirs. If they heard the rumor that Kaine was something other than human, perhaps they had decided not to look too closely at their new companion.