The Pumpkin Child is a animated pumpkin with the subtypes Plant, and Monstrous Humanoid. An ancient race that is immortal and never dies unless killed by a weapon or magical spell. They are care-free in every sense of the word so they are very friendly, although they do not liked to be picked on.

Pumpkin Children are playful and enjoy other races that share its whimsical nature. Their appetites remain more or less the same as an inanimate pumpkin: favoring compost and nutrient rich soils over other humanoid foods.

Usually nocturnal by nature, this race enjoys using magic. They generally use their roots to grasp or hold the ground where they are perch while manipulating their surrounding with their short, woven vine arms.

An animated pumpkin with roots that act like feet, an expressive jack-o'-lantern face and thin woven vines for arms and hands.

At the age of 10, a Pumpkin Child is more brittle than its younger versions and takes a -2 to AC but an additional +1 to Wisdom. 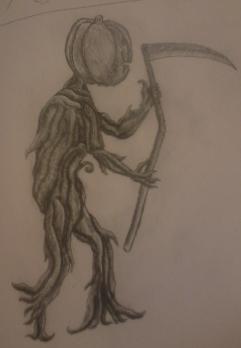 This race favors races affiliated with nature and/or magic especially chaotic ones such as sorcerers. Any race that can accept the Pumpkin Child's whimsical and playful manner is readily welcomed. While often a prankster, like the gnome, a Pumpkin Child is one of the first to laugh at any prank they see.

Most Pumpkin Children are chaotic, with a very small percent being lawful outside there patch. They can be equally good or evil.

Born in wild or unkept pumpkin patches, Pumpkin Children prefer forests and temperate areas with at least medium tree cover. This race has been known to congregate around any area dark twisted wood, graveyards and of course pumpkin patches.

The Pumpkin Children, while they do not have a religion, all follow and protect the Pumpkin King. While they often they embark on adventure, especially at younger and mid-age,there loyalty to there pumpkin patch and surrounding area is naturally there calling. There is only one Pumpkin King for each patch, and is always succeeded generally by the strongest and wisest Pumpkin Child born from the Pumpkin Kings seed. Pumpkin_King_(3.5e_Prestige_Class)

Pumpkin Children know Common, Under Common and 1d6 other languages (from creatures that pass it).

A Pumpkin Child usually has a short, playful name unless the local Pumpkin King named it before it decided on a name on its own. Examples: