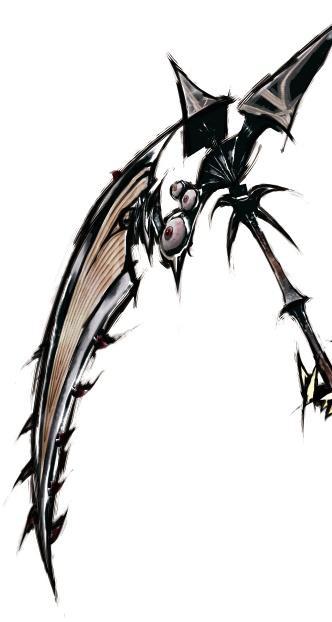 The holy symbol of Executioner Naiakiss

Executioner Naiakiss is a goddess of war and the general of the armies of the Pact of Ruin in Aegir. She was one of the first humans killed in the great war that ended Utopia, the first empire. She died at a young age, still caught between child and adult. Her soul was claimed by the reapers and she found herself in the domain of Agshasa Muren. He saw within her great bitterness and hatred for a people who allowed her to die so young, and he saw that he could use this to create a great warrior. She swiftly climbed through the ranks of demons and devils, rising in power and ability. By the time Sorastraz began, she stood at Agshasa's side and commanded his armies with surety and competence.

Naiakiss is depicted as a young woman, striking and hauntingly beautiful, covered in blood. She is usually wearing armor and wielding a mighty scythe.

Naiakiss is a goddess of vengeance, rage, and war. She entreats her followers to:

Most evil soldiers worship Naiakiss, and men in cults devoted to the Pact often worship her for her beauty and "innocence", while the young women strive to be like her. She is an icon of lost virtue, of beauty destroyed and innocence shattered. She is called upon by dying soldiers of all alignments, begging for death on the battlefield. A lot of Naiakiss' followers are underground human cultists, and she is sometimes used to ease in new worshipers into the Pact due to her charismatic "tragic figure" image.

Naiakiss is also worshiped by a few sects of good-aligned people who believe she was lead astray by Agshasa Muren and can be redeemed.

Clergy of Naiakiss are typically female warriors who have devoted themselves to furthering her cause in the mortal realm. Their main objective is to bring in more followers who will become soldiers in the Divine Battle after death.

Naiakiss does not stand on ceremony, and her religious practices are primarily fighting forms and meditations. Quick prayers and battle hymns are also common.