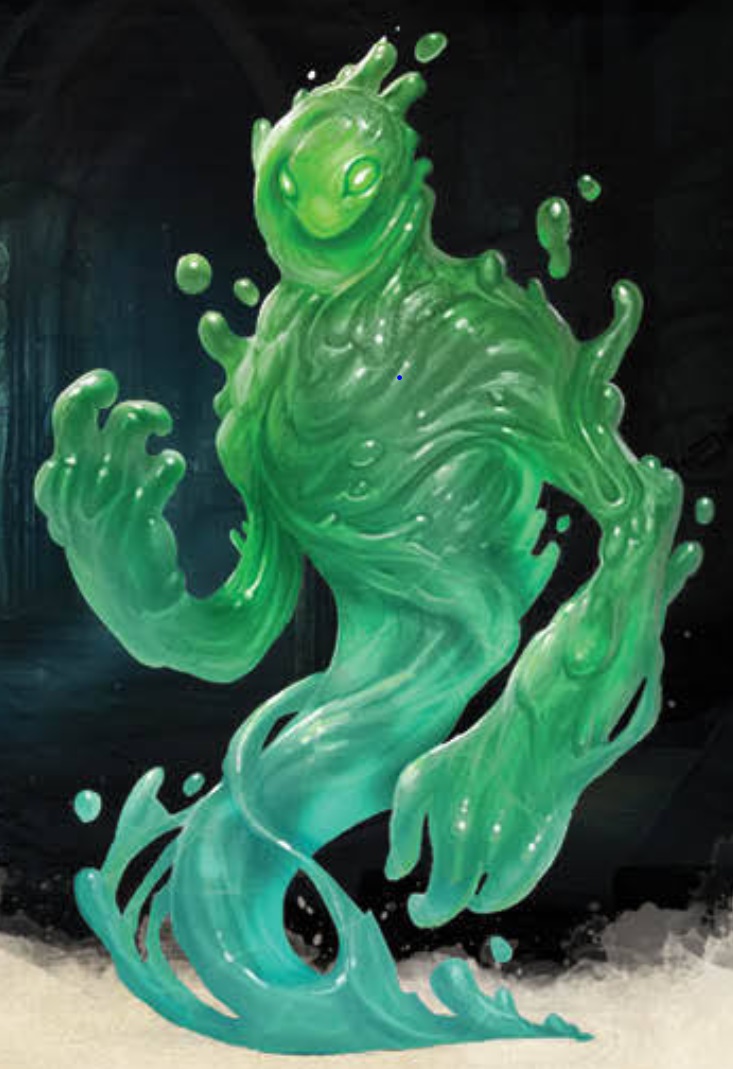 A mypaxia is a rare type of ooze which may be found with small gatherings of other oozes or in solitude. They prefer to reside in dark underground locations and will typically keep other non-intelligent oozes as pets and company. They prefer to avoid conflict, disguising themselves as harmless poodles of water if enemies approach. The body of mypaxia is made of a thick, flowing ooze coming in a range of cool colors ranging from blue to green to purple, very rarely deviating from this spectrum. More often then not, myxapia support themselves on a single flowing stalk, rather than two bipedal limbs, and slide across the ground in a similar motion to their primal brethren. But there are other myxapia who will choose to form two legs out of their ooze body to fit in better with humanoid society.

Myxapia may appear to have specifically male or female features, but they have no biological sex. They instead require a living humanoid to produce offspring. Through what is known as an ooze's kiss, the mypaxia converts other humanoids into their own. Most mypaxia only recruit from volunteers or as punishment for slaying mypaxia, since they sometimes face vigilant attacks because of their demonic origin. It is very rare, but there is another type of myxapia reproduction. Sometimes, a myxapia who has mastered control of its ooze form may attempt a type of rebirth. Upon their death, most of the myxapia's form will dissolve and fall away, leaving a single tiny ooze blob. Over time, this ooze will develop into a completely new myxapia.

Tales tell of two power hungry cultists, worshipers of Jubilex, the creator of all oozes. They were attempting to sacrifice their daughter to the Faceless Lord. But instead of feeding on her essence, the demon lord gifted her with great power and made her its queen in the material realm. She became known as Kineua, The Faceless Queen. She gained control over a large host of oozes and demons as well as a terrible gift: With just a single kiss, she could transform a humanoid's flesh and bones to slime. As the child of a demon prince and the ambitious human race, she shares the same absolute vision of the cosmos as her father, if only with her at the top of squirming, demented sea of slime and refuse. To solidify her power base, she created the mypaxia as her servants, worshippers and to spread her taint across the multiverse. From their worship, she grew from a mere half-demon to a deity of her own, even stronger than her father; a fact that most mypaxia regard as the worst deed of their race. Being creatures derived from Jubilex, they were evil at their beginning, but the influence of the Faceless Lord waned as its minions spread too hastily, transforming countless mortals into oozes. The indoctrination was often incomplete, and the new unattended converted found it easy to cling to their senses of self, rejecting both the Faceless Lord as well as their dark queen. The mypaxia of today see and treat her as a dark creator deity, fearing her and fleeing her reach and control. Most have forsaken her terrifying vision of the cosmos, since they know mypaxia need other races to procreate and to prove they can overcome their nature. 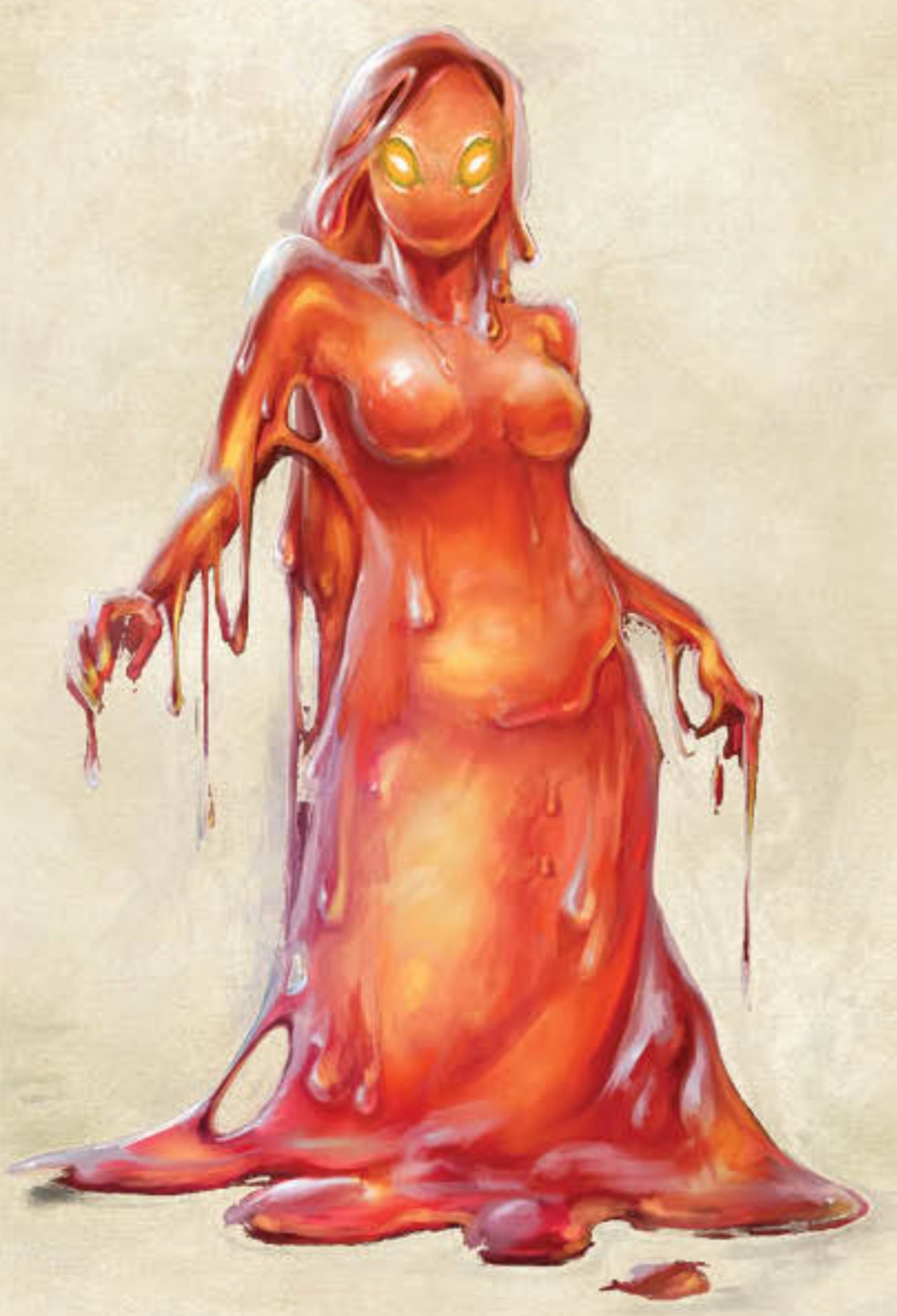 Due to the scarcity and danger of the Underdark, the distrust of those who know their history as well as having to flee from the predations of Kinuea, mypaxia live in scattered and isolated communities, hunting and gathering to survive. They regard strangers with distrust, but should they prove their good intentions, mypaxia are willing to aid them in their battle against evil denizens of the caverns, such as drows, fomorians or demons, but especially against cultists of their former masters. Punishments and decisions affecting the community are decided by a consensus of all tribe members. Who exactly is counted as kin varies from tribe to tribe; sometimes the accused themselves are allowed to vote and speak. If they grow large enough, they found cities of their own: tall and foreboding fortresses near impassable to non-oozes.

Myxapia do not have a specific gender, but they may show some physical male or female traits, depending on how they wish to shape their body. Some consider themselves a new entity compared to their old self and thus adopt a new name.

A race of intelligent ooze-like people
Ability Score Increase. Your Constitution score increases by 2, and your Charisma score increases by 1.
Age. Due to the myxapia's strange reproductive process, a newly created myxapia dues not need to physically grow or mature. This does not bring into consideration mental maturity which develops at different rates for all myxapia. Myxapia created through a myxapia's rebirth tend to grow and mature at the same rate as a human child, typically reaching adulthood in their late teens. While myxapia don't physically age, the mental fatigue causes them to degrade into slime after around 1000 years.
Alignment. Rejecting most forms of authority unless strictly necessary and through their heritage, mypaxia have strong chaotic leanings, in equal measure towards good or neutrality.
Size. While myxapia can make themselves taller, thinner and generally change their preportions at will, their mass is that of a Medium sized creature on the smaller size resembling dwarves yet being as light as halflings. Your size is Medium.
Speed. You base walking speed is 25 feet.
Amorphous Body. Your body is malleable, allowing you to squeeze through gaps too small for other living creatures. You can move through a space as narrow as one inch without squeezing, and have advantage on Strength and Dexterity saving throws and ability checks to escape being grappled. Equipment that would not fit through gaps you pass through is left behind.
Darkvision. You can see in dim light within 60 feet of you as if it were bright light, and in darkness as if it were dim light. You can't discern color in darkness, only shades of gray.
Diluted. You have resistance to acid damage.
Ooze Telepathy. You can communicate mentally with another creature that knows at least one language within a 10-foot radius. This creature doesn't need to share a language with you but unless they have telepathy themselves they can only receive and respond but can't initiate or terminate a telepathic conversation. You must be conscious to use this trait and cannot telepathically communicate with multiple creatures at once.
Ooze Nature. A myxapia's creature type is both humanoid and ooze. You don't require sleep, instead, you enter an inanimate trance for 6 hours. After resting in this manner, you gain the same benefits as you would have from 8 hours of sleep.
Plasmodium. Your gelatinous body is far too soft to support most types of armor. You can not wear armor that is not specifically made to accommodate your ooze-body.
Languages. You can speak, read, and write Common and one other language of your choice.
Subrace. Acidus, Mimguise, Psionai

Ooze's Kiss. This ability is available when the player reaches 4th level combined in all classes. The Myxapia may turn a grappled humanoid creature into another Myxapia. They may use their action to kiss a willing or grappled humanoid. If the creature is unwilling , it makes a DC 13 Constitution saving throw. If it succeeds, it successfully manages to repel the kiss and is immune to the Myxapia's kiss of all Myxapias for 24 hours. If it failed the saving throw, however, their lips will turn to goo. Ooze spreads around their body, converting flesh to slime. During this transformation, the Myxapia's body turns into an egg-like shape, enclosing the subject, then hardening the outside of the "egg", keeping the subject trapped and protected as the transformation commences. The creature is incapacitated, while the ooze transforms into the egg. When the subject is fully converted (after around 1d4 minutes), both the subject and the Myxapia fall unconscious, but the Mxyapia gains a telepathic link with the fresh ooze.

While converting the humanoid, the Myxapia may slightly alter some physical features such as height and they may give the humanoid features relating to one gender of their choice, not depending on the humanoids previous gender. The shell has an AC of 8, has 200 Hit Points and is resistant to acid, cold, fire, lightning and all bludgeoning, piercing and slashing from nonmagical attacks. If the eggs is reduced to 0 Hit Points, the ooze perishes, while the subject is freed with no ill effects.

Indoctrination. 1d4 minutes after the target completes its transformation into a Myxapia, the transforming ooze establishes a mental link with the target of its oozes's kiss where it will communicate with the target and teach its “baby” how to control its new body, while also trying to indoctrinate it into ooze society and (unwittingly) into the cult of Jubilex and Kineua, the Faceless Queen. At the end of 24 hours, the subject must make three DC 13 Wisdom saving throws. The effect of the creatures indoctrination is dependent on the amount of failed saving throws:

At the end of the indoctrnation, the shell that surrounds the creature softens and turns back into the Myxapia and the newly tansformed Myxapia is freed. Breaking away the shell beforehand stops the indoctrination, but does not return the creature's body to normal.

Ability Score Increase. Your Constitution scourge increases by 3 instead of 2.
Acidic Touch. You gain access to the Acid Splash cantrip, and may cast it with a range of touch. Constitution is the ability you use when determining the spell-save DC for this spell.
Caustic Form. When you are damaged by a melee attack, you may use your reaction to deal 1d6 Acid damage to the triggering attacker.

Ability Score Increase. Your Charisma score increases by 1.
False Appearance. You may cast the spell Alter Self a number of times a day equal to your proficiency bonus. When you do so, you may change the general shape of your body, such as becoming bipedal or quadrupedal.

Ability Score Increase. Your Intelligence score increases by 1.
True Telepathy. You may communicate telepathically with any creature within 60 ft. This replaces your Tactile Telepathy racial feature.
Psionic Influence. You gain access to the spell Calm Emotions, and may cast it a number of times between long rests equal to your proficiency bumps. Intelligence is the ability you use when determining the spell-save DC for this spell. 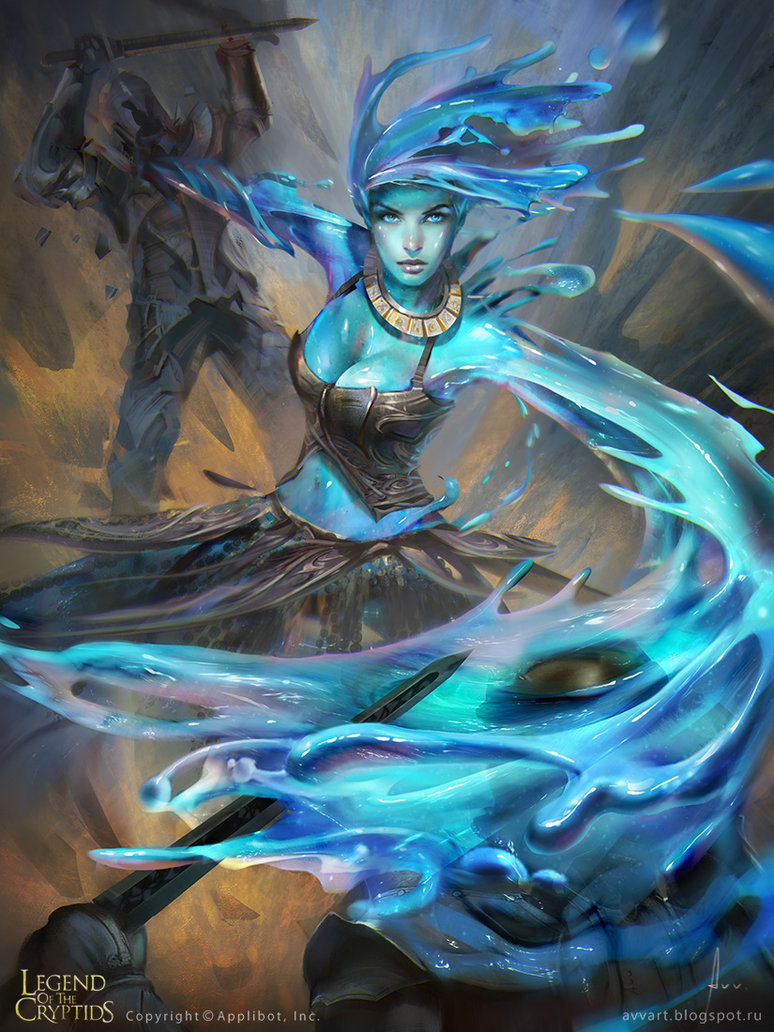 Made by Aleksei Vinogradov

Some Myxapia have special abilities developed through total conrol of their body.

Stretch. The Myxapia can stretch their body and their reach doubles.

Acidic Ooze. The Myxapia can innatly cast the Acid Splash Cantrip (Spell Save DC determined by Constitution stat) and all Pseudopod attacks deal an extra (2d6) acid damage. This requires the Acidus subrace.

False Appearance (3/day). The Myxapia can innately cast Alter Self. When they do so, they may change the general shape of their body, such as becoming bipedal or quadrupedal. This reaquires the Mimguise subrace.

Luminescence. On command, the Mypaxia can shed bright light in a 30-foot radius and dim light in an additional 30 ft.

Psionics. The Myxapia can innatly cast the spell Calm Emotions three times a day (Spell Save DC determined by Intelligence stat) and it can telepathicaly communicate with any creature within 60ft. This requires the Psionai subrace.

Split. As a reaction, when the Myxapia would be reduced to 0 hit points, it may choose to split itself into (1d4 + 1) tiny oozes.Each of these oozes has a speed of 10ft and (1d4) hit points. These oozes cannot take any action other than a move action. At the end of a long rest, any remaining oozes merge together to reform its body.