"The Moth don't care when he sees The Flame. He might get burned, but he's in the game. And once he's in, he can't go back, he'll Beat his wings 'til he burns them black..." 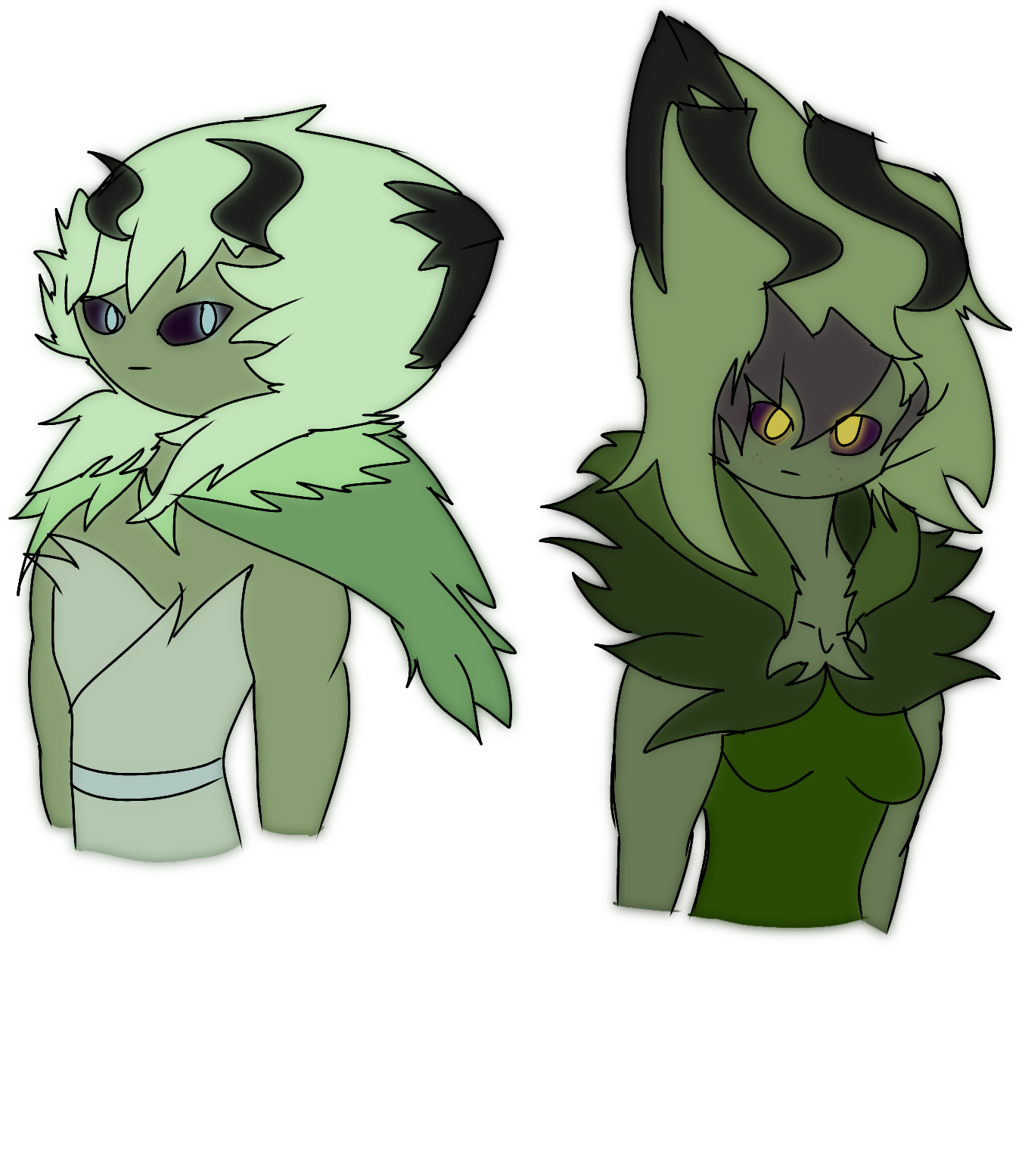 Mosa Moths tend to have a moss like color scheme, but will usually have a different color scheme depending on the environment they grew up on. The males normally don't have hair while females do. Both genders tend to wear leaf like hats, and have black antennas. They have leaf like capes which can morph into wings and allow them to fly through the skies.

Mosa Moths were created in Moss like fields, under the light of a dragons Radiant wings, gaining a sort of mossy appearance to match with their environment. The Mosa Moths proceeded to slowly evolve and change shape, becoming more humanoid and gaining their magical prowess. They focused deeply on their rituals and saw each other as a tribe. From then on, they saw there was more to the world beyond their own, and began to spread out letting their existence be known to the world

Mosa Moths tend to be together in tribes. often times on islands that are secluded from other races. They tend to keep their lives on the private side of things, but they can be reasoned with.

Mosa Moths tend to have weird names. some sounding alien, others sounding like the noise of an animal or object, and some with a mix of human names.

A race of magical humanoid moth like creatures, who finally reveal their existance to the world
Ability Score Increase. Your Wisdom score increases by 2 and your Dexterity score increases by 1.
Age. Mosa Moths can age around the same age as elves, maturing around 20 and living to be around 500 years old.
Alignment. Most Mosa Moths are usually Neutral party.
Size. Their size is usually that of a normal humans. Your size is Medium
Speed. Your base walking speed is 35 feet.
Darkvision. you have darkvision due to your mysterious like eyes
Hidden Wings. you have a leaf like cape on you, this cape can turn into wings give you a flying speed of 20 ft. If you are below 3/4 your maximum hit points, the cape or wings become unusable. They will regenerate after a long rest.
Camouflage. The area your Mosa Moth is created in is your best friend. You have advantage in Stealth checks while in moss or heavy brush.
Bright light/blinding light. You know the cantrip Produce Flame but also, if someone uses the cantrip Light or hits you with a bright light, you become blinded until the beginning of your next turn.
Languages. You can speak, read, and write Common and one other language of your choice.
Subrace. Blood Moon, Total Eclipse, Lunar Moon

Bloodlust. You do not need to eat or drink normal food and drinks, instead you must consume twice as much blood as a normal person’s water consumption each day. Any time blood lands on you, or you bite down on someone, you must make a DC 15 Charisma Saving Throw or enter a bloodlust state, to which you gain advantage on Strength skills and saving throws, but must attack the closest creature you can see for 1 minute. You may retry your saving throw at the end of each of your turns, ending this effect early on a success.
Superior Darkvision. Your darkvision ranges increase by 120 ft.
Regeneration. Your injuries mean nothing to you, and your body begins to fight back against your wounds. While you are below half your maximum hit points, you spend 1 hit die at the end of each turn. If you loose a limb, you regain it at the end of a long rest.
cursed transformation. when below half health, you must make a wis save or transform into what is known as a "Blood Moon Blairian". in this state you see everyone as a enemy, and gain the spell eldritch blast. this spell and form lasts until you become unconscious

Superior Darkvision. Your Darkvision ranges increase by 120 ft.
Approaching Darkness. You know the spell Darkness due to your mysterious necrotic nature.
Eclipsed Night. Your very wings can help you cover the suns rays, making it seem like a Total Eclipse is happening. Any creatures within a 30 ft. radius must make a DC 10 + your Dexterity modifier + your Proficiency bonus saving throw or be blinded until the beginning of your next turn. This can only be used once, regaining use at the end of a long rest
Farther Flight. You have traversed the skies more than any other Mosa Moth has. Your flying speed increases from 20 ft. to 30 ft.
Rebel’s Darkness. You emit a dangerous aura that gives the illusion that you're some kind of grim reaper. Any creatures within 15 ft. must make a DC 14 Wisdom saving throw, becoming frightnened until the end of your next turn. A creature that has succeed this saving throw can not be subject to it again.