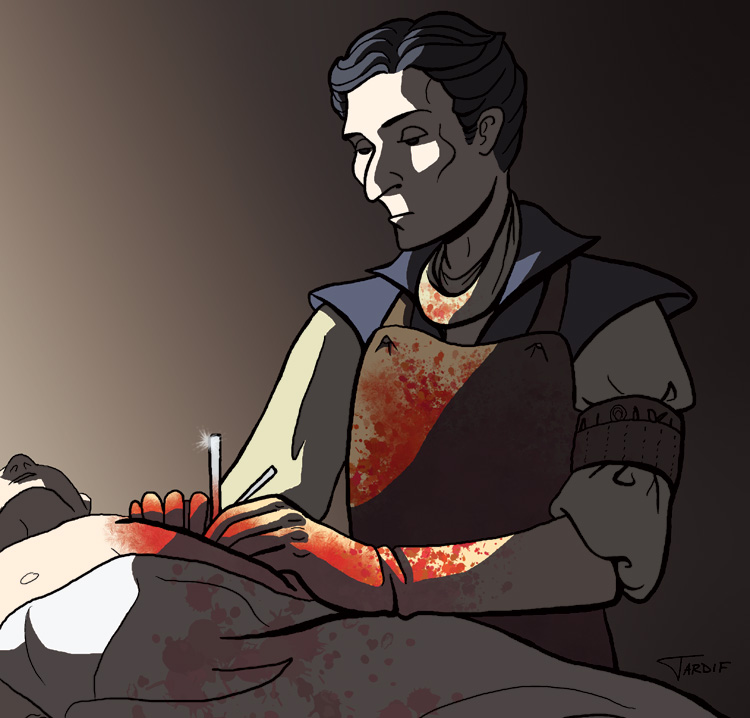 Thanks goes to Rowan

The Science of life and death is one that baffles both magic and medicine. Where a simple preist can only pray for good to heroicly thrust itself to the rescue, a mortician can sew you up and have you walking in no time, except you may more or less be, well, dead. Mortician's are, for the purposes of description, mad men who create and destroy frankenstein's monsters and vampires and zombies through second hand nature. A mortician isn't an easy job, not every one can do it, but those who can pursue the grave digger's path are usually lords of the living and the dead in their own right. Some mortician's become experts in their feild to the point that they can kill with a single blow and raise them to undeath before a pin drop.

Morticians do their best in a party that needs a healer with a backbone. The Mortician can create undead to help protect weaker characters or be cannon fodder to distract enemies. Because a mortician isn't the best in combat, he tends to surround himself with a posse of undead. Having the power to control undead, he can work alone, just with them. But a Mortician is a lot more secure with a fighter around.

Abilities: Wisdom is the most important ability for a Mortician, since it determines the power of most of their abilities. Dexterity helps them with their relatively low armor class. Constitution will help with the Morticians low hit die.

Races: Cardomor are the most likely to become Morticians, with their understanding of death. Humans sometimes take this class, with their tendency for war, they always need someone who can utilize the battlefield. Other races don't tend to take levels in mortician, though some do.

Alignment: Any non-good. A mortician who can fight off evil can be a neutral mortician, but the power to control undead is hard to not use for evil.

All of the following are class features of the Mortician.

Weapon and Armor Proficiency: A Mortician is proficient with all Simple Weapons, and Light Armor, but not with shields.

Gentle Repose (Sp): At first level, A Mortician may cast gentle repose a number of times per day equal to his Wisdom modifier + 1.

Rebuke Undead (Su): A Mortician has the power to Rebuke undead creatures as an Evil Cleric does, although the Mortician does not need a Symbol to do so. A Mortician may attempt to turn rebuke a number of times per day equal to 3 + his Wisdom modifier.

Sneak Attack (Ex): If a Mortician can catch an opponent when he is unable to defend himself effectively from her attack, she can strike a vital spot for extra damage due to knowledge of anatomy.

Ranged attacks can count as sneak attacks only if the target is within 30 feet.

Steady Hands (Ex): A Mortician gets a bonus on Heal checks equal to half his class level +1.

Resistance to Energy Drain (Su): Starting at third level, A Mortician gains a bonus on saves against the Energy Drain attack of undead, this bonus starts at +1 and increase by one at every third level.

Stitch Up (Ex): Starting At 4th level, a Mortician gains the ability to surgically heal both the living and the living dead, this ability takes 1 minute, and a successful heal check (DC 14), on a successful check, the mortician can heal 1d8 plus his level hit points of the subject. He must have his surgical tools to do this, or else he takes a -5 penalty on the check. the healing increase to 2d8 at 8th level, 3d8 at 12th, 4d8 at 16th, and finally 5d8 at 20th. He can do this a number of times per day equal to half his class level plus his wisdom modifier.

Desecrate (Sp): At 5th level, a Mortician may use the desecrate spell as a spell like ability a number of times per day equal to his wisdom modifier + 1.

Size Up (Ex): Starting At 7th level, A Mortician can use his knowledge of the body to judge how strong someone is. As a Standard action, he can make a special sense motive check (DC=10+ the creature's HD) to determine the HD of any living or once living thing.

Revive Undead (Sp): Starting At 8th level, A Mortician can cast Revive Undead as a spell-like ability once per day.

Zone of Desecration (Su): At 10th level, a Mortician begins to exert his authority over undead. This aura is identical to the effects of the Desecrate spell except that it affects only allied undead.

Raise Dead (Sp): Starting At 12th level, A Mortician can cast Raise Dead as a spell like ability once per day.

Scan (Ex): At 13th level, a Mortician has perfected his ability to perceive how strong something is. As a full-round action, he may make a special sense motive check (DC= 15+ the creature's HD) against one creature, if he succeeds, he can tell how much HP that creature has left.

Craft Flesh Golem (Ex): At 14th level, a Mortician may stitch up corpses into the form of Flesh Golems. He must make a DC13 Heal check and have least 6 bodies on hand, He must also have 500gp worth of bindings to bind the bodies together. He must spend an hour per body on the golem and after the work is complete, he has a flesh golem. For every 2 bodies used above the original six, the flesh golem has an additional hit die. The flesh golem counts as an undead in addition to a construct.

Improved Zone of Desecration (Su): At 15th level, a Morticians has obtained so much power of the living and the undead that his aura grows. His Aura of Desecration now has a range of ten feet per 2 class level.

Euthanize (Ex): A Mortician has reached the peak in his knowledge of the body when he learns how to successfully kill in one blow. If a Mortician studies his victim for 3 rounds and then makes a attack with a melee weapon that successfully deals damage, the attack has the additional effect of possibly either paralyzing or killing the target (Mortician’s choice). While studying the victim, the Mortician can undertake other non-attack actions so long as his attention stays focused on the target. If the victim of such an attack fails a Fortitude save (DC 15 + Half the Mortician’s class level + the Mortician’s Wis modifier) against the kill effect, she dies. If the saving throw fails against the paralysis effect, the victim is rendered helpless and unable to act for 1d6 rounds plus 1 round per level of the Mortician. If the victim’s saving throw succeeds, the attack is just a normal attack. Once the Mortician has completed the 3 rounds of study, he must make the death attack within the next 3 rounds.

If a death attack is attempted and fails (the victim makes her save) or if the Mortician does not launch the attack within 3 rounds of completing the study, 3 new rounds of study are required before he can attempt another Euthanasia.

Religion: A Mortician is most likely to worship a deity with the death portfolio. Though a Mortician tends to worship no one, if he is drawn to anyone, he prefers either Him or Nerull.

Other Classes: A Mortician generally does well as the party's healer if they don't have a cleric. Their low hit die and armor class means that they usually prefer to travel with a sturdier companion, though if they have a great amount of undead they are well protected. Morticians tend to get along with classes that fight far away from the enemy, protecting the wizards with a zombie or two. He also gets along with rogues and sorcerers. A Mortician gets along best with the warlock, for they are both misunderstood because of their powers. A Mortician avoids paladins at all costs and tends to avoid monks, for their lawful nature tends to get the Mortician into trouble. Clerics tend to look down on Morticians, thinking their work is botched work.

Combat: The Mortician can play the healer if you don't have one. He can also support the fighter by sending three or four good zombies to help him or her out. With his masterful control of undead, The Mortician can also use his zombies to protect the weaker members of the party. Two Hulking Corpses protecting the sorcerer never hurt...the sorcerer, anyway.

Advancement: The Mortician might take a few levels in Necromancer to further enhance his skills with the undead.

Daily Life: If a Mortician isn't adventuring, he has probably settled down as the village grave keeper or undertaker. Knowing how to preserve a body and keep it presentable even in death is a talent few possess. If the towns people don't know of the mortician's ability to dabble with the undead, they might also make respectable doctors. Most Morticians however, feel that keeping a steady life in a town won't let their power grow as fast as they like, so they turn to adventuring.

Notables: The most notable Mortician is the legendary Nexxus Ophinus, A Cardomor Mortician who adventured with his small army of zombies and found a Dragon Graveyard. He lost every undead servant he had taking down the Dragon Spectre of the graveyard, and it is said that now he has built himself a fortress in the graveyard, with a full army of undead dragons at his command, he is a force to be reckoned with.

Organizations: Morticians rarely assemble, their work makes them natural loners when they're not adventuring. There is legend though of a time when a hundred Morticians joined together to form an army of undead the size of a small city and laid siege. It is said they had to be stopped by Hieronius himself

NPC Reactions: Morticians whose powers are known are generally ostracized by society for there work with the undead. Those that aren't shunned are feared for their power. In times of war, armies might enlist Morticians as field surgeons, understanding that desperate times call for desperate measures.

Characters with ranks in Knowledge (Local) can research Mortician to learn more about them. When a character makes a skill check, read or paraphrase the following, including information from lower DCs.

Morticians in the Game[edit]

Morticians are not the best liked people outside of societies that find death, to be frank, unappealing. Who a mortician is is someone who see's death as inevitable, and so why not learn more about it? Players who want to be a mad man who sees not neccarily what other people want to see, a man or woman who isn't afraid of fighting a man off by having your dead freind's cat break it's bones in his head.

Adaptation: Mortician's can easily be made for a mad-scientist role, aswell as an undead summoner who relies on minions.

Sample Encounter: Mortician's make fierce villians and allies, a good way to add an element of horror to a game.