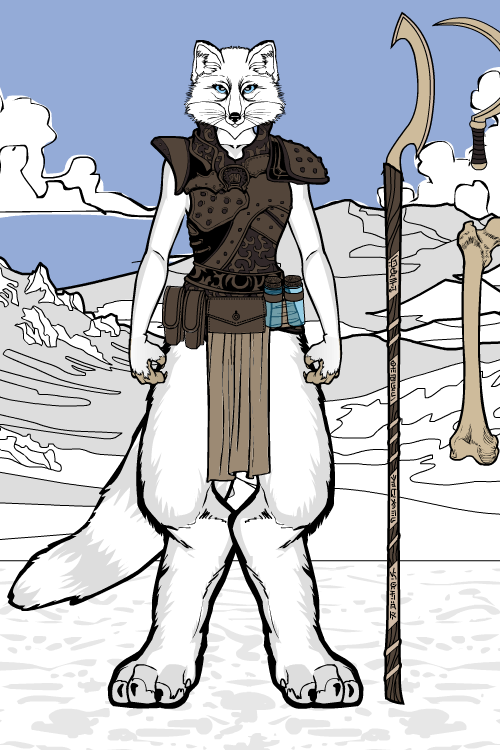 A mata'ri resembles a large humanoid arctic fox with large, powerful digitigrade legs. Mata'ri stand about 6ft. 2in. to 7ft. 6in. tall, and they weigh between 245 lb. and 341 lb.. Mata'ri are all hermaphroditic and feminine in shape, and just like all non-human primates, they do not possess permanent breasts. The mata'ri change coat as seasons change the same way an arctic fox does, being shaggier and white in the winter and gain a cream/brown coloration in the summer. Mata'ri eyes come in the same shades and colors as human eyes but shades of blue are more prevelant. A mata'ri is considered an adult at age 28, and they live on average 120 years.

Mata'ri tend to be ambivalent towards other races and mostly keep to themselves, they however do not shy away from co-operating with members of other races towards a common goal and are open to trade with any individual that desires it but do not wish to be involved in large scale trade with nations or city-states.

Thanks to their close connection to nature and deep druidic traditions, mata'ri tend towards Neutral alignments.

Mata'ri worship a quartet of deities know as The Four, each one embodying one of the four seasons.

The mata'ri speak a language known as ta'ri, or 'speech' in their tongue, mata'ri meaning 'speakers'. It has been described as being reminscient of Sylvan. It consists of nine vowels and twenty four consonants and compound words are extremely common.

Besides the normal effects of aging, mata'ri also receive stacking +1 bonuses to their Wisdom scores at middle age, old age, and venerable age, this bonus can only be earned through normal aging and not through magical means of aging the person.