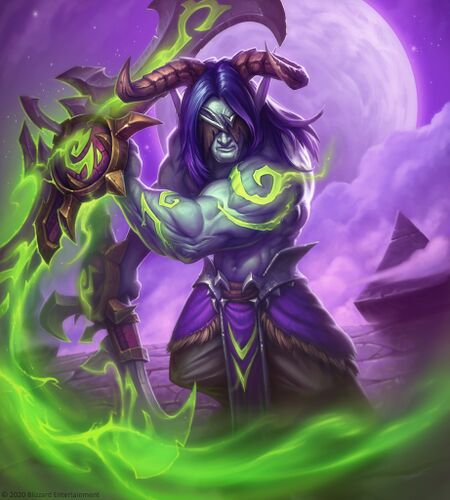 Demon hunters have a variety of abilities that assist them in destroying demons, though the power coursing through their bodies also allows them to prevail over lesser foes. Demon hunters eschew heavy armor, valuing mobility and speed. As a demon hunter grows in power, they undergo a gradual evolution, becoming more and more demonic in appearance. The changes are cosmetic and can take many different forms, from burning eyes to black blood. By the time demon hunters reaches the pinnacle of their development, they are a twisted and dark version of their former selves. Though the chaotic energy in their body does not affect their personality or allegiance (so the demon hunters claim), it wreaks great changes on their physical form. Their gradual evolution achieves its pinnacle as they become a demonic entity. Their appearance has changed to something frightening: changes can include glowing red eyes, horns, clawed feet and hands, wings, cloven hooves, a spiked tail, dark skin, a deep, rumbling voice, and similar cosmetic changes. The demon hunter becomes an outsider.

Demon hunters can drain a demon’s energy to fuel their own powers. They mainly use fel and shadow energy. They can channel the chaos energy within them into a melee weapon to increase its powers. In time they become more proficient in channeling demonic energy into their weapons, and highly skilled demon hunters are adept at this technique.

Dexterity should be your primary focus, as it empowers all your attacks and demonic magic. Charisma should be your secondary statistic, as this is your ability to command the demonic influence within you.

Demon Hunters learn to wield the unique Warglaive, a tradition among demon hunters, which are twinblades that are small enough to be wielded in one hand. A demon hunter ritualistically bonds with their pair of warglaives, and through bonding can perform the Transfer Enchantment ritual at will when it comes to their Warglaives… after concentrating for one hour, you transfer the magical qualities (properties, powers, and enhancement bonus) of an enchanted item into your warglaives. You must maintain physical contact with both items for the duration of the ritual. The warglaive has the following properties: 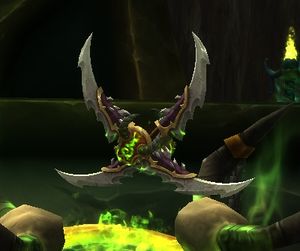 The warglaives are the symbolical weapon of the Illidari. These jagged dual-blades are light, allowing greater mobility during combat.

You learn the Metamorphosis Daily Power. You can use this ability a number of times equal to your Charisma modifier. In addition, you gain the Annihilate At-Will power.

Whenever an enemy creature dies within 5 feet of you, you can absorb a fraction of that creatures soul as it transcends to the Astral Plane. You gain temporary hit points equal to your Dexterity modifier when you absorb a soul like this. This bonus increases to 2 + Dexterity Modifier at 11th level, and 4 + Dexterity modifier at 21st level. These Temporary Hit Points can stack with each other.

Your demonic ability grants you unmatched mobility. When making an Athletics check to High Jump or Long Jump, your Athletics check result is not divided. In addition, thanks to your demonic wings that you can unfurl, you do not suffer fall damage.

Your powers are bold exploits derived from your relentless training in the Demon Hunter tradition. A list of heroic Illidari powers can be found here Heroic Illidari Powers

“You... were not prepared. The enemy came into our world, their only desire to extinguish all life. They slaughtered our loved ones. They razed our homes, our cities, and our sacred places. You tried to stop them... and you failed. And so you came to me, nothing remaining of you but rage and determination, and you learned that the things that once tormented you could give you power. Now you see that there is no sacrifice too great if it brings an end to the Burning Legion.”

Some of the Illidari show true control and master the demon within. These demon hunters are initiated into the ranks of the Illidari Slayers - masterful engines of destruction that lay waste to their foes with powerful torrents of chaotic energies. 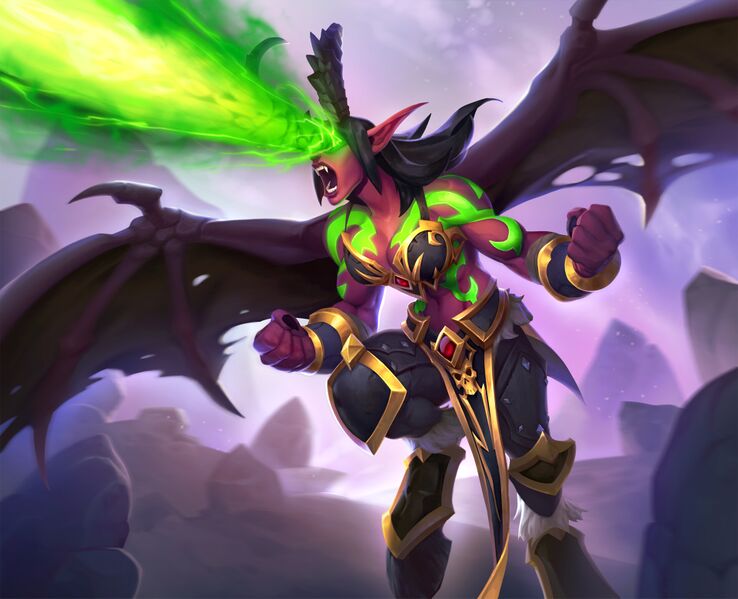 Furious Gaze: Whenever you use the Eye Beam power, you immediately gain an action point, which is also immediately spent.

Demonic: Whenever you use the Eye Beam power, you also shift into your Metamorphosis until the end of your next turn.

You are an epic hero now, and your physical and mental acuity exceed all mortal limits.
Benefit: Each of your ability scores increases by 1.

Benefit: You gain the level 21 feature of your chosen epic destiny.

The threats of the epic challenges you face are countered by the perfection of your body and mind.
Benefit: You increase two ability scores of your choice by 1.

Benefit: You gain the level 24 feature of your chosen epic destiny.

Benefit: You gain the level 26 power of your chosen epic destiny.

Training, practice, and experience have molded your abilities. Even as you near your final destiny, you continue to hone your talents for the tests you will soon face.
Benefit: You increase two ability scores of your choice by 1.

Benefit: You gain the level 30 feature of your chosen epic destiny.