"Great Light, Mover of all that is moving and at rest, be my Journey and my far Destination, be my Want and my Fulfilling, be my Sowing and my Reaping, be my glad Song and my stark Silence. Be my Sword and my strong Shield, be my Lantern and my dark Night, be my everlasting Strength and my piteous Weakness. Be my Greeting and my parting Prayer, be my bright Vision and my Blindness, be my Joy and my sharp Grief, be my sad Death and my sure Resurrection."

Yzmeri are more likely to have subjective perceptions.

To protect loss of face, an Yzmeri will rarely admit to a mistake.

Fatalism based on religious beliefs is common.

Honor is more important than facts.

Yzmeri believe in persons, not in institutions.

Emotions connote a sincere concern for the outcome of the decision.

Handshakes are common greetings and farewells.

Long handshakes, grasped elbows, and walking hand in hand by two males is common place in the Yzmeri world.

Hugging only occurs between close friends.

Only use the right hand to eat, touch and present gifts.

It is offensive to ask a man about his wife or female family member.

Yzmeri don’t have rigid schedules. Appearing to be in a hurry while meeting with an Yzmeri is considered offensive.

Never point at a person.

Yzmeri have a lot less body space than Mainlanders.

Hospitality, friendliness, and generosity to strangers is an expression of sacred duties.

When sitting, avoid stretching legs in front of or sitting up higher than others.

Don’t lean against walls, slouch in chairs or put hands in your pockets.

Double meanings are common in conversations.

Do not talk loudly.

The meal is usually at the conclusion to an event.

Yzmeri consider it impolite to eat everything on one’s plate, you are to savor the flavors of food and save them for later, rather then show signs of gluttony.

Take off your shoes at the entrance and leave them there before going in. 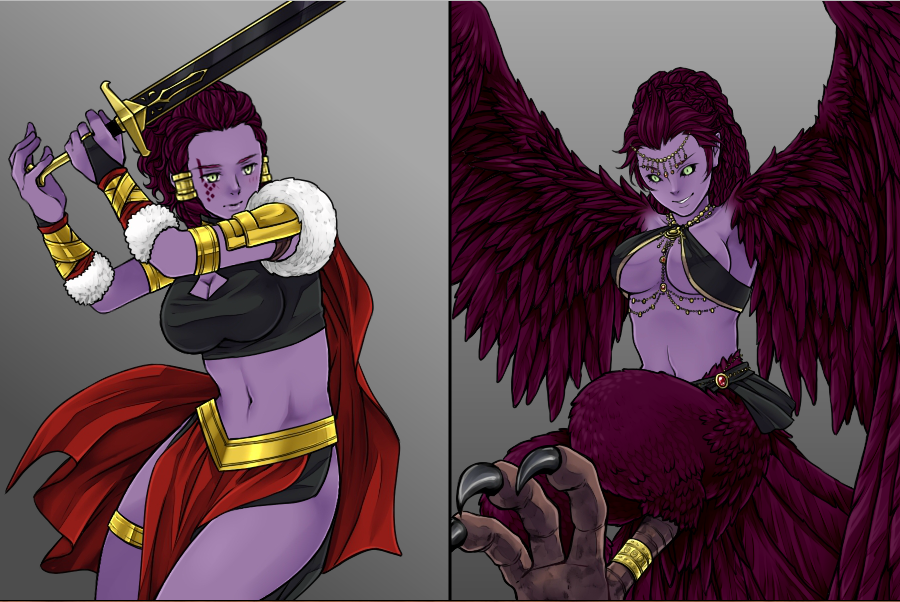 There is a kind of elevation which does not depend on fortune; it is a certain air which distinguishes us, and seems to destine us for great things; it is a price which we imperceptibly set upon ourselves. Francois de La Rochefoucauld

The Yzmeri are not monstrous like the mythology circling around Harpies would depict them—they are simply creatures who represent the condition of the heart; endurance through all windy or stormy weather, the will to fight and live, and hope to see life fulfilled. The Yzmeri are depicted as beautiful young women with lavender skin, dark purple wings and hair, with glowing lime green eyes that were slit like a reptiles.

The Yzmeri walked in two forms; the first was their humanoid form which often stood between five to eight feet tall in height and would by all means be considered human were it not for the glowing slitted green eyes and the purplish hair and skin. Their alternate form was seen only during acts of retribution, whenever an evil act was committed as the Yzmeri are beings of justice and vengeance eternal; their winged form is much like a harpy though they are stunningly beautiful and crave not the blood and flesh of mortals. Though their talons be mercilessly piercing to the bodies of their prey like an eagle, the Yzmeri will not attack unless provoked with righteous fury.

Normally if left untamed, the soft downy feathers of the Yzmeri's bestial form would eventually cover their entire body in a massive mound of fluff, so its not uncommon for the Yzmeri to become obsessed with grooming etiquette, styling their feathers to cover certain areas of their body, having certain lengths proportioned around specific areas of the body, even trimming feathers back to make patterns or shapes to enhance their beauty.

When in humanoid form, male Yzmeri wear Beige (or Burnt Umber, or Cocoa Brown) one-piece cotton garments called "Disdasha" with a head cowl known as a "Ghutra" supported by a black ring. A Bisht is a long over coat worn over the Disdasha on special occasions like weddings.

The female Yzmeri wear an "Abaya", a simple long black maxi-like dress with a headscarf called the "Hijab" and sometimes even a face cover called a "Burkha". Most women like to dress up in bright colors with a lot of gold jewelry and Henna art on their bodies. Females of higher status wear "Badlah" which is a matching suit comprised of an embroidered silk skirt, bangled bra, face veil, ornate headband, jeweled sash-like belt, and a large veil of many colors used as a sash and for dancing.

Children are considered as “jewels” and that men and women, as well as male and female children have different and distinct roles.

The family structure is tight-knit and is one of the major determining factors of personal status, followed by individual character and achievement. A person’s honor and dignity come from their family.

The Yzmeri have lived amongst the Nyanya since the ending of the first Great War amongst the races of old on Aum, and since then the tribal people have only sought to live a quaint life filled with tranquil stability and propriety amongst the standards of Adriatic Island diverse culture, while also with the hopes of serving as a pious ethnic group who can slowly through the Nyanya show other civilizations that The Old Way is the truest form of eternal serenity and enlightenment.

It is always best to say “Yes.” Keep in mind that a “Yes” can also mean “Maybe.”

Never openly refuse a request from a friend.

If someone does a favor for you, return the favor in some way.

People who are relaxed and personable enough to establish relationships tend to be more successful.

Yzmeri generally follow the Lawful Neutral or Lawful Good paths, as this race believes that the only way to ensuring that their home is protected, their culture is preserved, and their allies are not compromised by the unscrupulous political agendas of other nations, is by resting all faith and devotion into the will of the Overdeities, particularly The Lurker Queen. Some Yzmeri feel more passionately then others about their goals and the needs of their race, thus can be found to lean on the chaotic side, being more open to making extreme choices for the betterment of Adriatic Island then most are comfortable with. Evil is not tolerated on Adriatic Island, and any found with such tendencies are excommunicated from the homeland forever into a lifetime of exile.

The Yzmeri dwell on Adriatic Island, which is 224,533 square miles large with 3,000 miles of coastline. Adriatic Island is a tropical land filled with vast dense rainforests whose canopies are multilayered and continuous, allowing little light penetration. Most of Adriatic Island experiences a sunny and warm climate throughout the year as very few places experience high temperatures above 100°F (38°C) given daily high temps average near 80°F (27°C), while in the far-southern part of Adriatic Island the mid to high 80's are common. Adriatic Island is the most prosperous in agriculture, as 100 acres of land is farmland cultivated on rich black soil containing a high percentage of humus, phosphoric acids, phosphorus, and ammonia while also being mixed with Silt (fine sand, clay, or other material carried by running water and deposited as a sediment, especially in a channel or harbor.) which is sustained by a canal made to link from the coastline to the farmland itself. The ruling kingdom at the central focus of the island is Mali'Teke Kingdom.

Yzmeri culture and the Aum faiths are deeply intertwined. While Polytheism is the predominant religion, other religious groups are accepted and treated with respect.

Most Yzmeri believe that most of life’s events are controlled and orchestrated by one particular overdeity known as "The Lurker Queen", which was a Titan-sized Lurker much like Dendar on Toril. Man is dependent on the fate as determined by the Overdeities and is powerless in controlling many of life’s events. As a result, religious affiliation is essential to everyone in Yzmeri society.

Most Yzmeri believe there should be no separation between religion and politics and that religion should be taught to children in school.

While there are multiple sects of Polytheism on Aum, The Old Way, the worship and reverencing of the original Overdeities and their dictations is as important as any other type of law.

According to The Old Way, piety is the most admirable characteristic someone can have, but can only be seen by following the edicts laid out long ago in ancient scriptures passed down to all the races on Aum.

Auma (Semitic language very close to Arabic) is the first language learned amongst the races of Aum, but it is by now considered almost dead considering many of the races adapted to creating their own languages in time and putting aside their past altogether, never bothering to teach much in schools. The Yzmeri hold onto their past, thus their knowledge and ability to speak Auma never diminished.

Yzmeri can and will learn other languages native to Adriatic Island, but prefer to keep Auma as their primary, while their written form of Auma is cursive scripts that are notoriously difficult to decipher even amongst their own people due to the amount of detail going into such intricate symbology in writing.

Auma Script is written from right to left in a cursive style. In most cases, the letters transcribe consonants or consonants and a few vowels, so most Auma alphabets are abjads.