"Nature has given us two ears, two eyes, and but one tongue; to the end we should hear and see more than we speak." ~ Old Hissi Proverb

The faces of nature could not be better displayed then through the stages of a Hissi's lifespan. When starting off in the world as a young hatchling, the personality is one that is bubbly, excited, curious about every detail, sight, and sound that it examines near and far. A young Hissi will be determined to test everything, explore boundaries, get as many reactions from those around it as possible, and refuse to submit until thoroughly outsmarted. A Hissi in their prime often exhibits an overly enthusiastic mentality that's hellbent on proving themself to anyone they deem worth the effort or cause for. Mature Hissi are extremely emotional as their hormones are fully developed along with their reproductive organs, heightening their sensors to the maximum which causes the now adult Hissi to showcase aggressive temperaments with a bellying hunger to conquer challenges in their wake. An old Hissi is far more tempered, but not without their charm, as an older Hissi is far from harmless or without humor. They've learned to moderate their pranks and acts of aggression, but rely on cunning wit and intellect in their daily routines to "spice things up" for those around them and keep life entertaining as they age. When a Hissi finally reaches elderly, they have retired from most laborious tasks and taken on the role of grumpy old reptile, whose really not grumpy at all but just putting on a good show in their final stages of life as when they're not awake giving the younger ones some bite to their step, their spending extremely lengthy amounts of time sleeping till the day comes they never wake again. 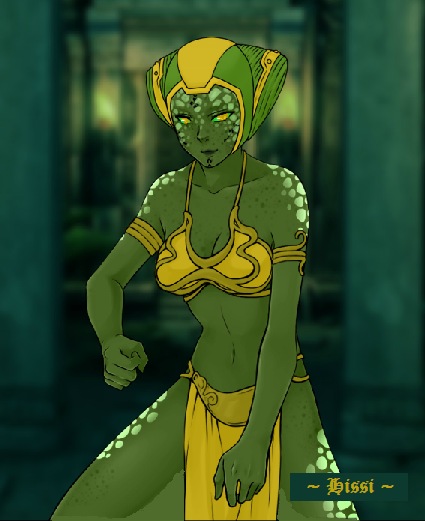 "The flower that blooms in adversity is the most rare and beautiful of all." The Emperor, Mulan

Hissi are sinuous humanoid creatures with the heads and tails of snakes and wickedly curved taloned hands for grappling and shredding. Their bodies are covered in fine, elastic, soft and colorful serpentine scales radiating vibrant colors that will adapt to the environments they dwell amongst. The average Hissi stands between five and seven feet tall and weighs from 100 to 140 pounds, though those born with more Yuan-ti features have been known to reach anywhere from seven to ten feet tall, boasting a muscular build from 140 to 200 pounds.

Similar to Nature's Avatar, a specialized profession rarely seen back on Toril, the Hissi are a race who united the spiritual practices of Druidism and Monk discipline to guide their culture towards a pacified living filled with contemplation and enlightenment. The Hissi are the result of the Yuan-ti on Toril interloping with the Serpentfolk from Golarion, but discarded the ritualistic indoctrination of following evil deities and set off into the Krynnspace to find a new fresh start for their race's future. The Hissi can utilize Ki just like monks, but like druids, prefer to use it for maintaining balance in the flora and fauna ecosystem around them; Hissi care not for war or petty squabbles over materialistic powers, nor will tolerate the ambitions for power and false pretenses that endanger the principles in which the Hissi became established on. The Hissi believe that Nature in all her divine beauty, grace, and temperance is the true measure of law in the world, and by respecting its lessons and creatures within, the Hissi will have a long and prosperous future ahead of them. The Hissi use the discipline from monks to only mature their warriors in fighting styles that are defensive, as they see killing as a last resort or for purely the need of providing food for the people. Thus, the Hissi see acts of cruelty such as torture to be forbidden amongst their society, and to catch one practicing such brutal methods is immediately excommunicated from their communities. Martial arts such as Sumo and Hapkido are examples of what a young Hissi male would be taught to show restraint in combat and utilize their physical abilities to subdue targets without the risk of killing. Hissi can naturally through these long years of intensive study and training amongst their generations, alter the energy flow of other living creatures, albeit in limited bursts, and only for defensive purposes which has helped the Hissi community protect their borders from undesirable predators. Hissi prefer to remain amongst their communities, as they see other races as nuisances trying to deter them from their pacified and neutral-behaving lifestyles; this doesn't mean they're not friendly or sociable, but simply that they'd rather have guests visit their cities for a brief period of time, learn by their example, and then be on their way. Hissi are very non-confrontational, and will do what they can to appease and de-escalate a situation before anything serious comes about, but if it should prove to be a serious incident, then the matter is swiftly taken to their Anathema (Divine Snake-like Guardian).

Hissi follow both the neutral and lawful spectrum of alignment as their beliefs shape their morality to either being methodical as a law-abiding traditionalist, or passive as seen in a distant yet not unfriendly hermit lifestyle where attention is focused primarily as being a steward of the lands and tending to its needs rather then deal with the political garbage of the world around them.

Hissi are conservatives at heart, therefore they require a wide birth whose flora and fauna mimic the heart of nature; nowadays its common practice amongst Hissi to settle civilizations in deeply dense jungles where nature sings loudest. Nature in jungles offer protection in the forms of carnivorous or toxic plants, and territorial beasts that roam diligently through the terrain as part of their hunting regimen. The Hissi also rely on the fact jungles have natural traps such as quicksand and mire pits where muddy marshes having air pockets that will suck down targets within mere seconds if unlucky. The Hissi also take advantage of the fact there's many types of insects that can prove meddlesome, and at times, lethal if an adventurer is not properly educated in biology to understand the signs nature gives as warnings to those trespassing Hissi territory.

The Hissi follow the teachings of their first Anathema named Xibalba, who instructed the Hissi to create offerings once a month at totems dedicated to the gods of the world they lived in; these totems were placed near the shores of the ocean where once a year a festival was held to celebrate "Xi'Ouro", which was life, fertility, bounty, death, and rebirth through Nature. Each totem, or "Ssyn'direl", was sculpted to symbolize the mightiest beast known to wander the world, as these creatures were Guardians, blessed with divinity through nature itself, and possessed immense abilities that normal creatures couldn't fathom. To appease these gods, Xibalba passed on various teachings and instructions to serve as a guide; the Hissi were given an official scriptures book called "Ssalakesh", a gift to the Hissi which gave insight into the spirits that lived within all the flora and fauna, how to appease both good and bad spirits when necessary, how to protect against evil spirits, and how to call upon spirits. The Hissi wrote spiritual psalms of prayer in the Ssalakesh dedicated to the spirits and gods of the world to be used in temple worship, giving the Hissi words and songs that offered inspiration and enlightenment during times of contemplation and meditation.

The religion the Hissi follow is officially known to them as "Sususrrus", which in their tongue meant "The Green", to symbolize their connection to nature. Each temple contained six priestesses chosen to serve and dwell within the compounds that became called Nature's Cradle as a "Seearie" (Snake Maiden) who would represent the elements of nature: Earth, Wind, Fire, Water, Light, and Dark; the priesthood was governed by a High Priestess known as the "Sethiarie" (Snake Mother) who represented the element Magic and communed directly with the spirits of nature in seeking guidance and overseeing the welfare of nature itself.

Due to their history, Hissi have passed down the languages of their ancestors, the tongues Yuan-ti, Draconic, Naga, and common when they must.