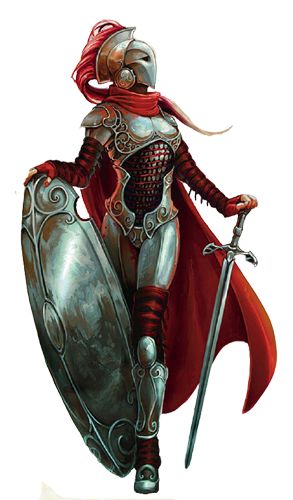 Worshipper's of Hathor that have been blessed with her gifts. They seek out retribution against all men who abuse the sanctity of marriage and harm women. They are the embodiment of love and beauty. There is a saying, "Those granted Hathor's gift are blessed with grace, but cursed with beauty." Because of this, most will live their lives without showing their face to another soul. They form bonds easily and will risk their lives to protect those they cherish.

Focused on tanking damage, and aiding their ally's in combat. They have limited combat abilities, but make up for it with their strong defenses.

Abilities: Constitution is a must and Charisma will enhance you abilities.

Races: Any humanoid that believes in the sanctity of marriage.

Gender: Must be female

Weapon and Armor Proficiency: Hathor's Guardians are proficient with all simple weapons, all armor types, and shields.

Divine Aura 1:All allies within 5ft, including self, gain fast healing 2.

Divine Aura 2:All allies within 10ft, including self, gain fast heal 3 and damage reduction 1.

Divine Aura 3:All allies within 20ft, including self, gain fast heal 4 and damage reduction 4.

Divine Aura 4: All allies within 30ft, including self, gain fast heal 5, damage reduction 5, and grants a +3 enhancement bonus to existing natural armor bonus.

Hathor's Gifts: Hathor's Guardians gain multiple gifts from their Patron Deity as they progress through the class. Gifts may be use a total of 1/2 ECL + Constitution Modifier/day.

Gaurdian (SU): Starting at the 1st level Hathor's Guardians may at will, instantly assign half damage to self in place of any ally within 40 ft. Acts similar to the Share Pain spell.

Chains of Fate (SP) Starting at the 8th level Hathor's Guardians may manifest chains to bind a foe which acts exactly as the Binding spell except it casts as a free action.

Hathor's Fury (SU)) Starting at the 14th level Hathor's Guardians may lunge their shield into the ground and release a bloody miasma that deals 2 Damage for every HP sacrificed this way. The miasma covers a 20 ft radius around the user and lasts 1d4 + Constitution modifier rounds. Only Hathor's Gaurdians are immune to the miasma. Hathor's Guardians may not expend HP that will cause them to fall below 1.