The Harvesters are ex-human Vikings who evolved through a mutagen. Their society and apparel have a medieval feel and their armor have a Viking feel. They have blue, green, brown, orange, steel and violet eye color, many types of hair colors such as blonde, red, iron and platinum and have white skin color.

The Harvesters are brave and dare deviling ex-human creatures that seeks to conquer and plunder the galaxy.

The Harvesters are all Middle class and like to duel each other they don't use any currency since their water and nature magic can create food, air magic to make electricity to power vehicles and buildings and earth magic to create minerals and materials so no need for a economy and the gold, credits and minerals they collect from plunders they keep it in vaults as a sign of they're glorious raid it has multiple governments such as Monarchy, Kraterocracy, Stratogracy and theocracy.

They are very good friends with Halflings, Lashuntas, elves and dwarfs they are suspicious of Vesk due to their rivalry in being the deadliest warrior race and hate Orcs due to their destructive nature.

Odyn the god of plundering.

The Harvesters are humans of the many Viking clans of the Warblood tribe from golarion that much like the Azlanti have escape from golarion years before the gap however instead of magic they used a mysterious ring gate to travel to the planet of Nilfgard however that means they were trapped on Nilfgard with no way to get home so they build their own new Warblood tribe called the Harmony Warband though many not know this but the way they call them selves the Harmony Warband it means to be one with nature with the harvesters taming Nilfgard animals such as alien like canines and Ursine and evolving to become stronger not being peaceful and the Harvesters is not just a race anymore it's a creed and ideology though they did not evolve by cybernetic enhancement or Superhuman serums but with mutagens created with very special chemicals, a mysterious miasma and genes of Fungai, insects and animals that creates super mutants which means every citizen and soldier are mutants beings. And not only humans but other species as well when the Harmony Warband invented a FTL warp drive and made contact with the pact worlds a scientist of the Harmony Warband thought to him self "If this Mutagen can turn a human into a mutant what can it do for a golarion non-human race and a alien." So Loh was the first Lashunta to become a Shieldblood a Lashunta mutant if you may say. They Harmony Warband seeks to plunder and conquer the galaxy.

Blood bound Has immunity to chaotic and ice magic damage.

Vikings from for honor

the deprived from a indie game called Starfall online/tactics

mutants that are created from mutagens.

and stargate for the mysterious ring that the Ashians used travel

all pictures belong to their original holders 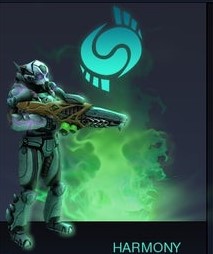