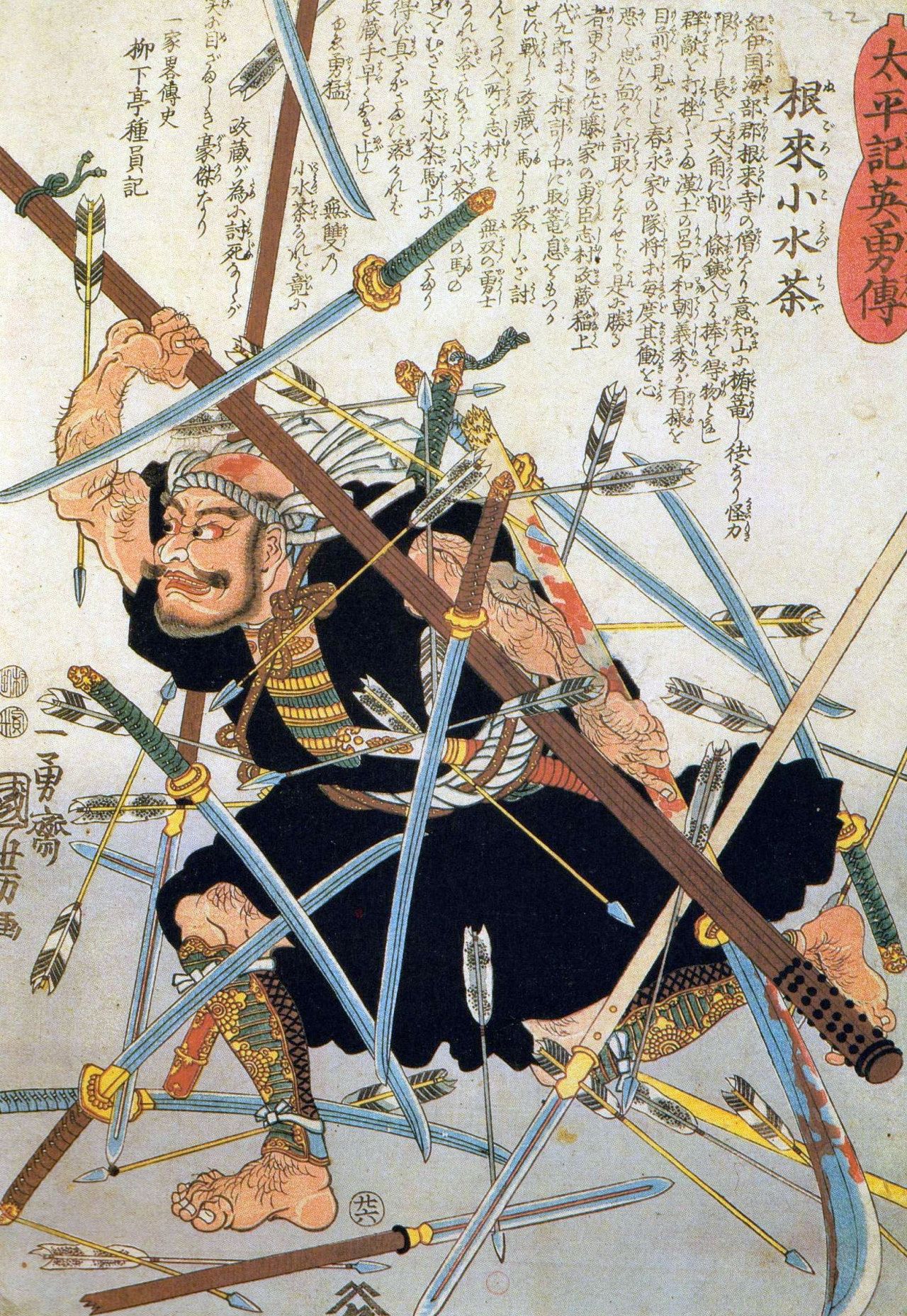 This is public Domain

Devout Warrior Monks from the Mountains who Fight with bare hands or with exotic weapons. They are able to channel their Chakras and use these sources of energy in Combat. They are flexible in warfare and can learn Qi Weapon styles from Samurai or Ninja but only a few. Other orders of Monks might fight without Arms and Armor but these monks face a harsh reality defending the villages and temples in their forest and mountain homes. Most Yamabushi can not be Evil, Neutrality is appreciated due to the fact that some monastic brothers and sisters cannot feed every hungry mouth or save every life in danger due to their own survival and most monasteries are focused on survival first and then helping the needy secondary... but many of the monks are good and will at least attempt to, even if that means voluntarily leaving the Temple grounds to live as a hermit. The more Chaotic monks have left the temples to live as hermits or wandering holy men while the more lawful monks protect villages and temples.

Yamabushi in combat can split into a light or heavy style. Light Yamabushi fight with medium or light armor and generally gravitate to Ninja weaponry while Heavier Monks gravitate to the fighting methods of Samurai. Yamabushi also use Qi but their Qi is far more magical in nature then the extraordinary physical feats of their brethren.

Abilities: Wisdom is the source of their Qi and their abilities are spectacular so Wisdom could be argued as their most important Ability. Heavy Guardians utilize Strength While the light Wandering Hermits use Dexterity. Constitution is also important for health and eventually with Qi.

Races: Generally Human but Monks are more tolerant than the Feudal socities in the Valleys, ports and cities below.

Alignment: Any Non-Evil. Monks can be Cold and practical or Compassionate but Monasteries will not tolerate Sadistic Monks nor will villagers or Hermitic Monks.

Starting Gold: Same as a Monk

Starting Age: "Complex" or "As wizard".

Yamabushi are rugged Warrior Monks who spend several hours living the the wilderness and making a living. They are defenders of the mountain and forest ethnic groups. They strengthen their limbs working the earth with plow and axe. They have cunning from living in the deep woods. They are fierce defenders of the poor and the outcasts who live in the wilderness. They hunt down evil forces and banish them especially those that plague the common farmer.

Weapon and Armor Proficiency: Wandering Hermits focus on light Armor and generally favor the weapons of Ninja. Temple Guardian prefer heavy Armor and the weapons of Samurai. But there is nothing strict about Yamabushi when it comes to combat and they are known for mixing combat styles. Yamabushi are practical fighters. The Yamabushi can learn Niten?, Kenjutsu?, Tetsubojutsu, Sojutsu, Karate, Jujutsu, Ninja-to?, Tekko-Kage, Bojutsu, Kyudo, Shruiken-jutsu, Kunai but cannot learn Bushido nor Kuji-in (Ninja Magic).... Recommended combinations are Bojutsu, Sojutsu, Kyudo and Tetsubojutsu or Karate, Tekko-Kage, Jujutsu and Shruiken-jutsu.

Gift of Qi: The Yamabushi is a master of channeling Qi through his Chakras and can actually give his Qi energy to other Heroes who use Qi. A Yamabushi recovers full Qi every encounter so Qi is a quick regenerating resources that is to give like water.

Spell Strike: Even in the thick of melee combat a Yamabushi can cast spells and heal others, Especially if he has placed a "Celestial Character" Orision on an ally.

Unarmed Strike: At 1st level, a Yamabushi gains Improved Unarmed Strike as a bonus feat. A monk’s attacks may be with either fist interchangeably or even from elbows, knees, and feet. This means that a Yamabushi may even make unarmed strikes with her hands full. There is no such thing as an off-hand attack for a monk striking unarmed. A monk may thus apply her full Strength bonus on damage rolls for all her unarmed strikes.

Elemental Qi: Spending one Qi point per attack can convert the unarmed strikes into a Elemental damage of choice; Fire, Ice, Lightning, Acid. This ability can be used as a feat by other classes.

Yamabushi are combat magic users; this means that even in the thick of combat they can simultaneously cast their chakras magic spells while striking opponents and and they are able to do this once a turn and at level 10 they can do this twice a turn.

Chakra Magic: This is the Unique powers of magic and combat that is generally unique to Yamabushi, but some other character classes have learned these styles before.

Wind Wings. 2 Qi doubles character leaping or running distance. also no maximum leaping distance. They can also cast levitate or Feather fall using this ability on themselves or others.

Wind Wall. 4 Qi can cast Wind Wall or Flight on self or others.

Lightning Leap. 8 Qi This spell is a combination of lightning Bolt and Dimension Door, Yamabushi will suddenly turn into a bolt of lightning and dart in a straight line hitting all his foes and dealing lightning damage, from this bolt he will reappear somewhere else.

Ice Prison 4 Qi (Cast on one enemy target and deals 4d6+wis Cold damage and freezes the enemy in a wall of ice, Wall of IcWisx20 hp.

Stone Skin 6 Qi as the spell and can be cast on ally.

Mirror Image 2 Qi. As per spell.

Darkness 3 Qi. as per spell.

Dimension Door 4 Qi as per spell.

Breath of Life 7 Qi (heal someone 4d8+Wis and bring them back to life, but body must be whole).

Yamabushi who fall towards evil can become regular fighters or under extreme circumstances they can even morph into horrific Oni.

Religion: Yamabushi protect the shrines of the common people and worship the same beings, wether it is the saintly Boddhi-dharmas, the greater Kami or even the Elemental Dragons and ancestors.

Other Classes: Since Yamabushi are generally neutral and honorable they are respected by various other classes, only the most arrogant Samurai or aristocrat would look down on them for being rugged and rustic. Bosastsu and Shugenja see them as mystical guardians and allies.

Combat: Bosastsu are masters primarily of Qi and they utilize it generally better than many other Heroes of Shimazu and Zhong.

Advancement: Since Yamabushi can learn combat styles from Ninja and Samurai they are generally set in hand to hand combat while their Chakra magic is unqiuely a gift of their own.