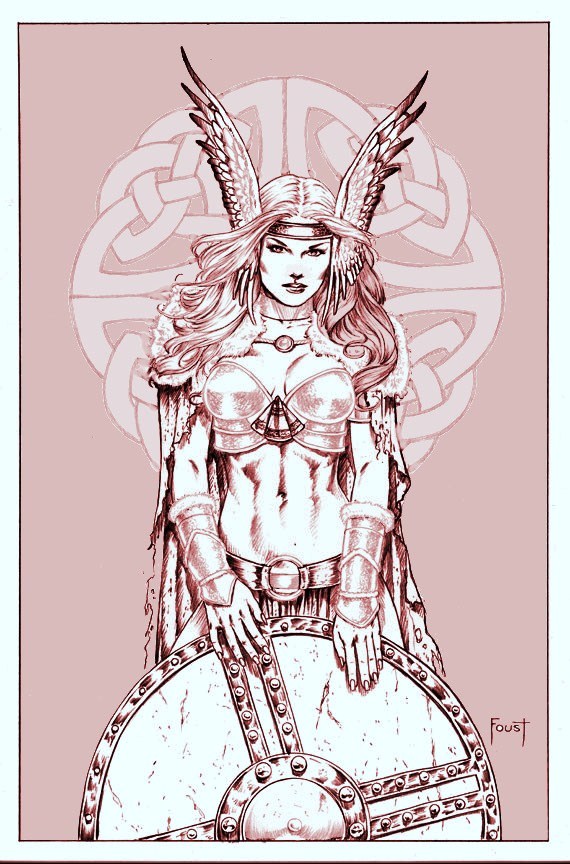 This class is balanced using the Same Game Test. As such, it tends to be more powerful than your average Paladin.

Grey Guardian's are paragons of defense and protection. They begin their journey as able warriors with rare magical and martial abilities. As they progress they become powerful defenders able to receive damage in place of other party members. They are unique masters of fighting defensively during combat. They also gain access to a small amount of divine spells similar to a ranger.

Grey Guardians are front line fighters. They protect the party by engaging opponents in close-range combat.

All of the following are class features of the Grey Guardian.

Aura: 1st level. Characters with a Good or Evil alignment gain an Aura equal to their class level. This Aura also has a retribution effect that any character that successfully strikes you with any attack takes half of the total damage rounded down.

Martial Focus (Ex): 2nd level. You gain a +1 to attack with martial weapons.

Smite (Ex): 5th level. Choose a Good or Evil aligned strike. This choice is permanent. All your attacks deal 1d6 extra damage against opponents of this alignment. This damage increases at 10th, 15th, and 20th level. This damage is not multiplied with a critical hit.

Taunt: 6th level. You can provoke an opponent to attack you as a standard action. The target creature must succeed a Will save, dc 10+level, or become provoked for 1 round. A provoked opponent will spend their next turn attempting to harm only you. Your opponent must be able to see or hear you in order to become provoked.

Mage Craft (Ex): 7th level. You can produce magical weapons and equipment as if you have a Caster Level equal to your ranks in Craft.

Healing Surge (Su): 8th level. Once an encounter as a swift action you can heal yourself without using a spell. You can heal, (25% of your total health + your Intelligence modifier), in hit points. This can also be used outside of combat anytime you take an extended rest.

While holding a Guardian Stance you gain a +2 deflection bonus to armor class and can increase your reach by 5 feet. However, you suffer a -4 to all attacks and can only move in 5 foot steps. You can no longer be flanked while holding this stance. But, you can still be sneak attacked by a rogue of four levels higher than yourself.

While holding a Guardian Stance you are considered readied against any movements made by opponents within 10 feet, and there is no limit to the number of attacks you can make against moving opponents.

Cover (Ex): 11th level. Whenever you use a guardian stance you can also select one ally within 60 feet. That ally gains a +2 dodge bonus to armor class and you take damage in place of that ally for 1 round. Also, you can only be subject to damage once from the same attack or spell.

Hope (Su): 14th level. Whenever you use a guardian stance you summon the effects of the Good Hope spell upon yourself and any allies within 30 feet. Each affected creature gains a +2 morale bonus on saving throws, attack rolls, ability checks, skill checks, and weapon damage rolls. This effect lasts for as long as you maintain a guardian stance. Allies must remain within 30 feet to benefit from this enchantment.

Spells: Beginning at 4th level, a guard gains the ability to cast a small number of divine spells, which are drawn from the ranger spell list. A guard must choose and prepare his spells in advance (see below).

Like other spellcasters, a guard can cast only a certain number of spells of each spell level per day. His base daily spell allotment is given on Table: The Grey Guardian. In addition, he receives bonus spells per day if he has a high Wisdom score. When Table: The Grey Guardian indicates that the guard gets 0 spells per day of a given spell level, he gains only the bonus spells he would be entitled to based on his Wisdom score for that spell level. The guard does not have access to any domain spells or granted powers, as a cleric does.

A guard prepares and casts spells the way a cleric does, though he cannot lose a prepared spell to cast a cure spell in its place. A guard may prepare and cast any spell on the ranger spell list, provided that he can cast spells of that level, but he must choose which spells to prepare during his daily meditation.

A guard's caster level is one-half his guardian level.

A Grey Guardian who multi-classes trades their ability to cast Light at-will for only once an hour. They retain all other benefits of the class.

Epic Bastion Whenever you use a Guardian Stance you gain damage reduction 9/-. This increases to 12/- at 25th level and 15/- at 28th level.

Bonus Feats: The epic Grey Guardian gains a bonus feat (selected from the list of epic Fighter bonus feats) at levels 21, 24, 27, and 30.

Grey Guardians in the World[edit]

Notables: Lady Matilda Fergus. Youngest of six, wife of Hadaram Mac Fergus. She was an esteemed warrior of the Western Nordic Valley. Believed to have made her fortune early by slaying White Wolves and crafting fine winter clothing from the pelts. Married Hadaram at the age of eighteen but was unable to have children. She served in the Midlands Campaign along side her husband in her mid-twenties. It is widely believed she spearheaded the counter-attack against Hanz Mill, slaying over thirty Black Tribesmen and their Worg hounds during the night. After the death of her husband at the age of thirty-two she became a priestess and retired to a highland monistary. Her sheild and longspear still remain in the family hall of Sir Robert Brune's country estate.

Characters with ranks in Knowledge (local) can research Grey Guardian to learn more about them. When a character makes a skill check, read or paraphrase the following, including information from lower DCs.