This race first appeared in the official D&D supplement 'The Orcs of Thar, Gazetteer 10', by Bruce Heard in 1989. And has been adapted to fit 5e. 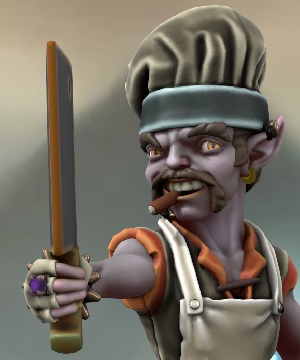 As an outside observer Grey Goblins might look like they are the runts of the litter, but in actuality they are a completely different variety of Goblin altogether. This breed of Goblin will always have grey skin, pointy ears, long nose, reddish eyes with shades from purple to orange, and usually short brown hair. They are a bit stockier than their cousins, but just as nimble.

Grey Goblins have evolved to be smaller, stronger, and stealthier, but just as dexterous as their cousins. This is due to their lower class status within the Goblinoid societies, they have chosen to slink away instead of fight. They have been used as laborers for a very long time by the other humanoids and goblinoids, and so Grey Goblins have evolved into a stockier and stronger variety of Goblin, at the expense of their health. Not much is known outside of this. Due to their illiteracy, they don't keep records of their history and story telling is not a common practice, the Grey Goblin society lives for the moment, not for the past.

Society in Grey Goblin clans is tribal and sometimes brutal, with survival of the fittest being the norm. If you don't make it, oh well, there are a hundred more that want to fill your spot. Assassinations do happen, but they are rare, and usually are only sanctioned by the powerful. Most Grey Goblins are enslaved by other Humanoids and Goblinoids, and have been for generations. But some eventually escape and build their own colonies hidden away, so they will not be found and be enslaved again. One well known Scientist-Mage who refers to the species as Goblinus Occidensis stated, "Goblins occupy an uneasy place in a dangerous world, and they react by lashing out at any creatures they believe they can bully. Cunning in battle and cruel in victory, goblins are fawning and servile in defeat." This breed of Goblin have been fawning and servile for a long time.. Illiteracy is endemic within society due to their low status, but they do speak the common dialect of Goblin, and a really smart Grey Goblin might even know another language fluently. Grey Goblins prize shiny objects, even if the object doesn't have much value. Sometimes they can be bribed easily with such items.

Grey Goblins are typically named after an action, a verb, or an adverb at least. With their surname being their place in the litter. Male and Female names can be the same, there is no distinction.

For example one known Grey Goblin is called 'Flap Runt' when translated to Common.. His oldest brother or sister might be called Flop with a surname of First, or One, or the One, of One.. or something similar that shows his or her dominance. So surnames are all based on which one came first.

Goblins easily discernable by their grey skin, reddish eyes, short brown hair, and larger muscles.
Ability Score Increase. Your Strength score increases by 1 and your Dexterity score increases by 2.
Age. Grey Goblins reach maturity early at about 8 years old, and usually die young due to violence, but can live to be 60 years old or more.
Alignment. Lawful Evil tendencies, but they can be influenced by their leader's alignment. Usually not Good, but Neutral Goblins are not unheard of.
Size. Grey Goblins do not vary widely in height and build, they are usually only from 2'6" to just over 3'. Your size is Small.
Speed. Your base walking speed is 30 feet.
Darkvision. You can see in dim light within 60 feet of you as if it were bright light, and in darkness as if it were dim light. You can't discern color in darkness, only shades of gray.
Sneaky. As a lower caste goblin, your tribe has learned how to slink away from any danger and as such you are proficient in Stealth.
Lesser Fury of the Small. Because Grey Goblins are very subservient, they have chosen sneaking over reprisal when dealing with larger creatures, unless backed into a corner. Because of this, when you damage a creature with an attack or a spell and the creature's size is larger than yours, you can cause the attack or spell to deal extra damage to the creature, but the extra damage equals only HALF your level. Once you use this trait, you can't use it again until you finish a short or long rest.
Nimble Escape. You can take the Disengage or Hide action as a bonus action on each of your turns.
Languages. You can speak Goblin. If your Intelligence is higher than 12 you may speak one other language. You cannot read or write.