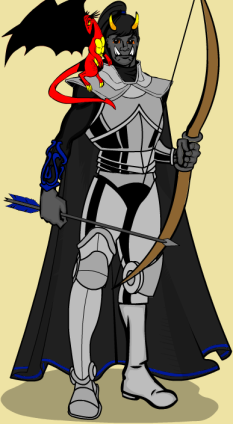 Gebbys are different from one another. More so than other individuals of most races, these gebbys are even more so.

A Gebby Paragon acts as a less powerful, but hardier psion.

All of the following are class features of the Gebby Paragon.

Weapon and Armor Proficiency: None.

Cerulean: Levels in this class act as cerulean imitator levels for all reasons other than gaining class features.

Extra Gebby Racial Power (Ps): Add a power from the gebby Power list to your list of psionic powers. A gebby paragon may forsake both of his extra racial powers for an extra mutation.

Extra Mutation (Ex): At 3rd level a gebby paragon may gain a mutation from the gebby mutation list if he has forsaken his two extra powers at second and fourth levels.

Wings (Ex): At level 12, A Gebby Paragon sprouts Insect-like wings of a unique shape, that is are the same color as their blood. His wings give him a fly speed of 30 feet with good maneuverability. A Gebby with vision eight fold may instead gain vision fourteen fold (A Permanent True seeing effect with caster level equaling hit dice) and replace vision eight fold.

Weapons: Any that a gebby is proficient with.

Religion: As a normal gebby: "Most gebbys practice a kind of ancestor worship where a gebby will use the idea of a unusually genetically similar ancestor as a standard to emulate and measure up to. If a gebby worships a deity, it is often Gebbyblybyb. Gebbys do not bury their dead, are duogamous, and never know who their parents are."

Other Classes: Gebby Paragons Get along well with Psions and Cerulean Imitators.

Combat: As a focused psionic manifester.

Gebby paragons often act as minor figureheads and leaders in the hive clusters they live in. Such as guard captains, spy masters, arch psions, and azure council members.

Daily Life: This largely depends on the powers taken.

Notables: Donack, seer and high inquisitor to his highness, Deepswim, king and emperor of the flooded 386th layer of the abyss. Renowned for his vision 14 fold, and his aptitude in both clairsentience and divination, as well as his skill with a morning star and sickle, and the bow.

Organizations: Little to none.

NPC Reactions: A fully realized gebby paragon will either have a set of wings or more pupils than strictly nessisary, and will therefore get stared at, possibly intently.

Characters with ranks in Knowledge (Dungeoneering) or Knowledge (Arcana) can research gebby paragons to learn more about them. When a character makes a skill check, read or paraphrase the following, including information from lower DCs (with the possible exception of 1).

Gebby Paragons in the Game[edit]