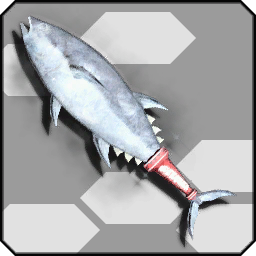 "The prized weapon of all Nyanya, the mightiest of the frozen fish dinners, The Frozen Tuna".

This fish is the body of a Bluefin Tuna, the largest of all Tuna species and a rare prized catch of the Nyanya race who will perform a ceremony to preserve it in permafrost and craft it into a weapon. There is a joke amongst Nyanya that "To embrace the biggest one must have no concept of bigness", which they reference that only an insanely huge individual could truly masterfully wield a weapon such as the Frozen Tuna with strength and efficiency.

“I used to say that there were Five Levels of Fatness. Reason why I say, ‘Used to say’ is because now there are six! Uh-huh, I met the new one in Las Cruces. The original five levels are Big, Healthy, Husky, Fluffy, and DAMN! People ask, “What could be bigger than DAMN!” The new level’s called “OH HELL NO!” What’s the difference? You’re still willing to work with level five. Example, if you’re on an elevator and you’re with your friend and this really big guy gets on and you and your friend look at each other and you’re like, “DAAAMN!” But you still let the big guy ride your elevator. That’s the difference. Level six, you see walking towards your elevator, [Deep growling noise] [Pretends to be a shocked passenger and starts pushing the “close door” button.] “OH HELL NO!” [Growl] “NO!!” [Growl] “NO!!” [Pretends to kick the fat man out] That’s the difference." -Gabriel Iglesias, comedian