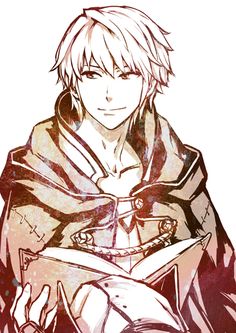 A Focused Tactician is a support fighter who can use his incredible insight and tactical mastery of fighting to sway the tide of battle and keep his own in the front line defenses if necessary.

Abilities: Focused Tacticians depend upon incredibly high wisdom to help themselves and their allies win the day. Along with intuitively reacting in combat, a high dexterity and a high strength is of good use for a focused tactician.

Races:All of the races have need for focused tacticians, but only the more intelligent races can become accomplished ones. Therefore, the most likely races to be tacticians are elves and humans. Dwarves see no need for tacticians, preferring rush-in tactics, and Half-Orcs lack the intelligence for such thoughts.

Alignment: Any. most focused tacticians are lawful.

All of the following are class features of the focused tactician.

Study: At first level, a focused tactician can study a single enemy. He locates its key weakness or weak spot as a full-round action, and gains a double critical-threat bonus and gains +2 on rolls to confirm criticals. He can pass the knowledge among his teammates as another full-round action.

Mind over Matter: At first level, a focused tactician may add his wisdom to his Fortitude saving throw and Concentration.

True Expertise: At second level, a focused tactician adds his Wisdom modifier in addition to his AC and to his grapple attempts and Strength based skills when he is wearing light or no armor.

Rally: Starting at 2nd level, as a move action, a Tactician can call for her Party to rally around her. All of the Tacticians allies can choose to make an immediate action to move up to their base movement speed towards the Tactician. A Tactician may then share any knowledge gained through Study during that fight with her allies as a free action. Any movement made through this immediate action still provokes attacks of opportunity if moving through a threatend square. This ability can only be used once per encounter.

Tactics: Tactics: Starting at 2nd level a Focused Tactician can begin to coordinate her teammates' movements. As a standard action she can issue orders to the entire party. The party is not compelled to follow these orders but those who do recieve a +2 coordination bonus to attack rolls and a +1 coordination bonus to AC. The bonuses provided increase by +2 and +1 respectively at each fourth level after this one. (EX: At 6th level it is +4 to attacks, +2 to AC. At 10th level it is +6 to attacks, +3 to AC. Etc.) This bonus lasts for 5 rounds and cannot be used again during those 5 rounds. A Focused Tactician can use this ability a number of times per day equal to 3 + their Wisdom modifier.

Masterful Maneuvers: At third level, whenever a foe attempts to disarm or trip you, and you win the opposed roll you may immediately initiate another opposed roll to disarm or trip them, as appropriate, even if that foe possesses the improved disarm or improved trip feats. Likewise, whenever a foe attempts to grapple you or sunder an item on your person, if he or she fails to do so you may make an immediate attack of opportunity even if that foe possesses the improved grapple or improved sunder feats.

Aided: The party will do almost anything to save their Tactician. Any player in the Tactician's current party gains a +3 to all rolls attacking an enemy currently engaged in combat with the Tactician.

Tactical Style: At fifth level, a tactician selects a style that stacks with the bonuses of Tactics. Every fighter within 50 feet of him gains the bonus as shown in the style.

Quick Study:Starting at 7th level a Tactician has become adept at studying her enemies. She can now use her Study ability as a standard action. This ability can be used in the same turn as a Rally.

Tactical Style Upgrade: At tenth level, a focused tactician adds a bonus to his already existing style as stated below.

Offensive: +1 to melee attacks, +10 speed to all charge attempts

Defensive: +2 to AC (stacks with preexisting bonuses, including Tactical Style level one)

Improvise: At thirteenth level, a focused tactician becomes more adept at unorthodox tactics, and can use more strange ideas to his advantage. He can use his environment, anything around him, as a weapon, building materials, or any other conceivable battle or survival aid. He gains no penalties that would normally be attached with using random items as weapons.

Fool Me Never: At fourteenth level, a focused tactician reduces any bonuses of foes who attack him, or who he attacks, derived from combat expertise, dodge, mobility, or power attack, or other circumstance bonuses to AC, attack rolls or damage rolls, by a number equal to half of the focused tactician's Wisdom modifier. Tactician gains permanent true-seeing

Heroism: The Tactician can push himself once per week to perform a near impossible feat. This is primarily used to turn the tide of a battle.As an immediate action, target ally gains DR7, SR 7+Class level+Int mod, doubles crit range and adds X1 to the weapons multiplier and gains temporary HP equal to 20+1d10+Int mod, grants Freedom of Movement and the target's next die roll is an automatic success for 7 rounds.

Ultimate Tactical Style: The Tactician can gain another bonus to his previously existing tactical style, as shown below.

Specialist: All level 3 or lower spells and psionic powers used within Tactician's range of influence (10 feet) are free of cost

Greater Study: The Tactician gains all information about the selected enemy, and the next 2 attacks against that enemy are guaranteed to hit.

Religion: Focused Tacticians worship deities of their choice, but will often turn towards combat and good-fortune oriented gods.

Other Classes: Focused Tacticians tend to look down upon less intelligent classes, but they respect anyone who will listen to their ideas and has the ability to bring their plans to fruition.

Focused Tactician in the World[edit]

Focused Tacticians tend to be expert in many things

Daily Life: Focused Tacticians generally spend their time expanding their knowledge. If they know big battles are coming up, they will ceaselessly research their upcoming enemies with a fervor that the illiterate may find unnerving.

NPC Reactions: Some will appreciate focused tacticians while other will afraid from them.

Characters with ranks in Knowledge (History) can research Focused Tacticians to learn more about them. When a character makes a skill check, read or paraphrase the following, including information from lower DCs.