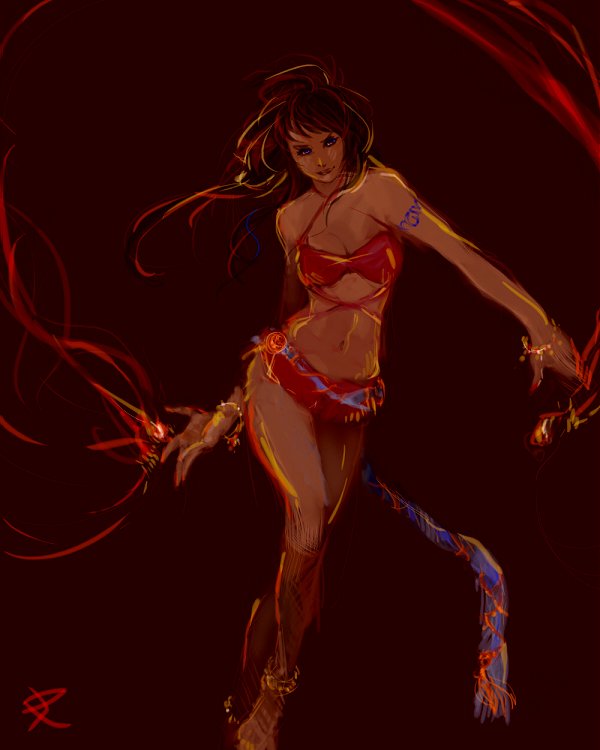 A fire dancer performing. (Used at the permission of http://rephen.deviantart.com)

Since time unmentioned man has revered fire as something to be respected, feared, and loved. It brings light, warmth, and cooking. But it can also herald great destruction. Fire dancers revel in the chaos of fire, although they themselves don't have to be chaotic, they enjoy its warmth, revel in a semi madness at the burning villagers running from their homes, and enjoy a good cup of hot tea. The most important thing to a Fire Dancer is having fire around. They attempt to mimic its motions in their own lives and philosophies. The also gradually learn to be on fire without hurting themselves. They join it into their core and can exhale flames.

The main reason to pursue this class is for fire. Not much more can be said. This class is meant for those that wish to punch things in the face with fire. Monks have the best time entering this class. The most important stat for the Fire Dancer is everything a monk would want charisma, dexterity, constitution and strength. It also helps to take this variant of monk.

As the Fire Dancer progresses through the levels of this class, their body becomes more and more like fire and eventually is made almost entirely of fire. All of the following are class features of the Fire Dancer.

Weapon and Armor Proficiency: Fire Dancers do not gain proficiency with any weapon or armor.

Monk Special: A monk that becomes a Fire Dancer can be chaotic and still retain all of his monk abilities, in addition his Monk levels and Fire Dancer levels stack to determine his unarmed strike damage, increased move speed, and armor bonus.

You cast spells as a sorcerer does. All spells from the Fire Dancer spell list are known spells. Each of the level 0 spells can be cast at will. The following list is your spells known list:

Incinerate: As a swift action, make a perform dance check. Any square you occupy is on fire, and deals 1d6 damage per 4 points your perform check exceeded 10, each round. The fire lasts a number of rounds equal to your charisma modifier.

Flame Wheel: Whenever you successfully tumble through an opponent, you may deal 1 damage per level of Fire Dancer to that opponent.

Evasion: You gain Evasion as the rogue ability. If you already have evasion you get improved evasion instead.

Flare Blitz: Whenever you successfully bull rush you may deal damage equal to your flame attack sp to the target.

Will-o-Wisp: Whenever you deal fire damage to an opponent, that creature must make a fortitude saving throw with a DC of 10 + your HD + your charisma modifier, or take 1d6 damage each round for 1d6 rounds, and receives 1d6 strength damage.

Fire Punch: Whenever you deal damage with your flame attack, you may deal half of that damage to all creatures in a 10 ft. radius around the creature struck (including yourself).

Fire Spin: You can dance on top of flames. As long as you are dancing you may walk on top of any flames as if they were solid ground.

Flamethrower: Your flame attack has a range increment of 10 ft.

Flame Attack (Sp): At 2nd level, the Fire Dancer gains Unarmed Strike as a bonus feat. If you already have Unarmed Strike, you may choose another feat instead. In Addition, whenever a Fire Dancer makes an unarmed strike, flames come out of their body, dealing an additional 1d6 per level of fire dancer to anything they strike or grapple with. This ability cannot be used while wearing armor of any sort.

Burnt Visage (Ex): The Fire Dancer's face is a gruesome mess of scars and burnt flesh. Beginning at 4th level the Fire Dancer gains a +10 bonus to intimidate checks made against anyone that can see his face.

Firemind (Su): The Fire Dancer embraces the fire into their every thought. Beginning at 5th level, the Fire Dancer's caster level for fire spells is equal to their hit die, instead of their levels in Fire Dancer. In addition, any spell that allows the caster to read the Fire Dancers mind burns the caster. They must make a will saving throw with a DC of 10 + Fire Dancer levels + your charisma modifier, or become blind, and unable to cast divination spells for 24 hours.

Body of Flames (Su): The Fire Dancer is now one with the fire, the heat and the cold does not exist for him, he always feels pleasant room temperature. Beginning at 7th level, he has damage reduction 10 per fire element, and any creature that swallows him takes 5d6 points of fire damage each round.

Fire Breath (Su): The fire is inside you! Beginning at 8th level, the Fire Dancer can spit great cones of flame. The area is a 15ft. cone, and deals 8d6 damage. This ability works the same way as a breath weapon.

If a Fire Dancer is out in the rain or goes swimming they must dry out before they can use any of their class abilities.

Fire Dancers in the World[edit]

Fire Dancers in the Game[edit]