This is a guide to the Fighter class, originally written by Dictuum Mortuum on the WotC forums. 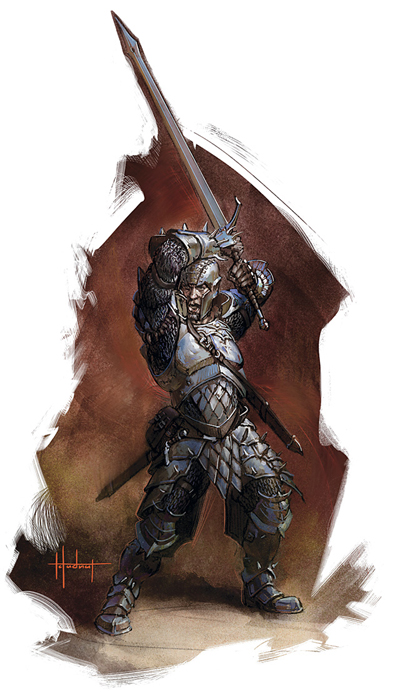 Alert: Be prepared for a long read.

This is an attempt to optimize the well known PHB class. Unfortunately, people only take the class for the bonus feats, as a dip. Lately, getting fighter beyond 2nd level got some additional credit with the introduction in the Dungeonscape supplement of the Dungeon Crusher alternative class feature. In this guide, we won't be using fighter as a dip though. It may be mysterious, but actually a lot of people enjoy playing a fighter, even fighter 20. I am well aware that clerics, druids, wizards, artificers, etc. are powerful classes. However, it can't be said that playing these classes at such an optimized (close to theoretical optimization) degree is actually fun.

Feats for fighters are split in three sections: The primary combat styles, the secondary styles and the general feats. Fighting styles are: Spring Attack, Unarmed Strike, Two Handed Weapon, Armor, Shield Offense, Shield Defense, Two-Weapon. The secondary fighting styles are: Expertise, AoO, Flanking, Defensive Fighting, Charging, Combat Form. Mounted combat style is not addressed because fighters can't acquire a special mount, familiar or animal companion as paladins, hexblades or rangers do; they could, however, use a common warhorse. Also there isn't an archery combat style because fighters lack the bonus damage swift hunters get from skirmish and rogues from sneak attack.

Fighters depend a lot on their choice of weapons. Choose wisely. Most weapons in PHB are more or less equal. However, exotic weapons are being published with each new source book. Most combat styles should focus on acquiring weapons that have nice damage and allow for different attack modes (trip, disarm, etc). While a factor, critical range isn't the first priority.

There are abilities like rapid shot and flurry that let you take additional attacks by reducing your attack bonus. At first glance, they may seem nice, but that's not always the case:

Assuming you have a base attack bonus of +6 and an attack bonus of +9. Your normal damage in each successful hit is 15 hit points. You face an opponent with 20 AC. Critical hit/miss are not included in the calculations.

So, on average, even though you get an extra attack with the chance to deal 15 more damage, you only get 3 points up in return. This doesn't mean that these abilities are bad, only that you'll have to use them in conjuction with a relatively high attack bonus.

So to wrap it all up, you can find your damage output by following these simple steps: