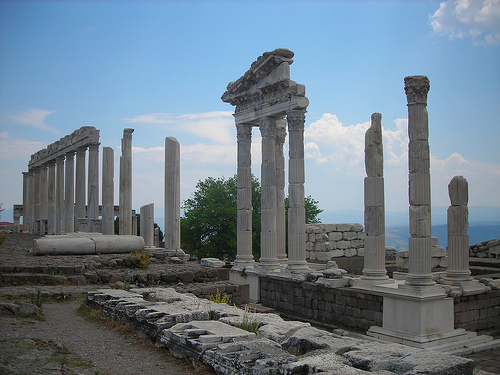 |75px|thumb|A once mighty temple that has fallen to ruin under the rein of Cassia.]]

Cassia is a goddess of selfish, irresponsible, licentious behavior. She takes advantage of perceived and actual wrongs committed against groups of people, and encourages them to rebel against the system they are in. Once that is done, whether it is a success, failure, or somewhere in between, she encourages her followers to "liberate" themselves by shedding all social commitments, responsibilities, and all duties. Morality, ethics, and respect for real liberty and justice all fade under her influence, as the people degenerate into an abyss of sinful behavior and pleasure-seeking.

When Cassia first enters a region, she appears in the woods and other isolated areas, and tells poor women that a new divinity has arrived in the land and will protect them. She also appears to women who are overstressed or feel repressed or oppressed in some way.

Cassia is a rare individual; she has undergone apotheosis and rose from mortal to divine. Born to a callous noble elven family, she was taught to have a disregard for people poorer than her and was raised to believe that the great masses of the peoples of the world only existed for the benefit of a few exceptional individuals. She was raised with servants to do everything for her and she was never taught the value of responsibility or integrity. As a regular elf, she had a weak but beautiful and graceful body, and a keen mind with keen senses. Because of her persuasive talents, Cassia eventually became an archmage and like many archmages, decided to produce a masterwork: her own divinity.