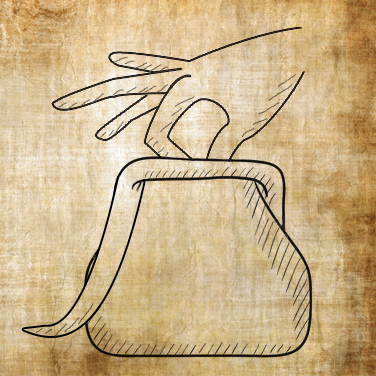 She is depicted as a very young, very small, human teenager, with black hair and leather armor. She has a sack of some kind of treasure on her back. This is for the Our World

She is the deity of stealth, of guile, of rogues. She is also one of the three gods of knowledge, the middle of the three. She has battled for the return of her sisters ideas in the church of conni, rallied her followers to stop the lords movement, and stopped Vameril from his first attempt to destroy Ulen. She is the daughter of Heart Simon and Asmeus. Her siblings are Stamely, Cormilious, Brogey, and Conni. Her Husband is Hillwere. Her sons are Yerfin and Ti-yul.

Her clerics don't preach about her religion. They don't even have church honors for prayer. They encourage people to experience the world on their own, and learning the teaching of Faunt through living. Her clergy include rogues, some rangers, bards, and the slum folk. Her temples are usually the size of average houses in the area, and are usually in the slums. They are considered neutral ground for all law issues, making it a safe haven for rogues who get caught in the act. Nobles look down with destain at the Church of Faunt, and maybe even the deity her self. Still, none are willing to challenge the might of the women who split two Continents into islands.