Created out of a mix of dragon and human blood, the Dracons are an attempt by the Draconic races to tap into the adaptability of humanity while still maintaining the power of Dragons by means of advanced alchemy. Unlike Dragonborn, Dracons never ruled an empire. Dracons live on farms and in the desert as herders, but also in tribes and settled urban areas. Able to employ a wide variety of skills and magics, the Dracons can be a formidable threat.

DC 15: The Dracons possess several major cities and control over a vast desert, but have no unified empire to speak of, and never had one to begin with. Instead, a variety of kings and chiefs control their civilization instead of a single emperor.

DC 20: Unlike the lost Dragonborn empire of Arkhosia, the Dracons rule themselves, and are independent of dragons. While many Dragons live in their lands, no Dracon city is currently under the rule of one.

Assigned to combat crime in the city which they live, these street-smart Dracon fighters are better suited for tackling subversives and rogues than for resisting invasion. Nevertheless, they are problematic for lower-level adventurers who break the law. Dracon patrols are rarely found alone, as they know that there is strength in numbers.

Tribal Dracon fighters from the desert make tough opponents for the unprepared adventurer. Armed with scimitars and throwing daggers, skilled in traveling across harsh terrain, and merciless in combat, these warriors have been the bane of many an invading army.

Dracons fight using a variety of methods. Usually, they will attempt to attack from the front as a battle begins, but if this proves ineffective, they will resort to other, less conventional tactics. Dracons have little sense of honor, and do not feel guilty about laying traps, using poison, or doing anything that is necessary to gain an advantage over their opponents. Raiders are often used by kings of city-states, who use them to attack the lands of their rivals, do as much damage in as short a time as possible, and retreat back to the safety of their own lands before the rival can retaliate. 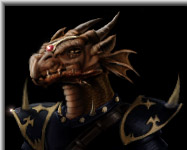 Regular soldiers are relatively rare among the Dracons; outside of wall guards and city patrols, most of those who are in service to a Dracon king or lord are simply called to service when the need arises, either as part of a militia, as a mercenary or self-proclaimed warrior without any professional training. These Dracon soldiers are armed and trained better than average city guards, and use skill as well as strength in their attacks.

Dracon nobles, kings, arenas, and temples often have a fighter in their retinue who stands out as the best of the best. Larger and stronger than most other Dracons, the champion is given the best training and equipment available. He singles out the easiest opponents first, then works his way to the more powerful ones. All Dracon champions have the ability to use acid breath.

Dracons may be found in any number of groups; as soldiers for a king, warriors for a tribe, mercenaries for hire, rogues in the city streets, bandits in the countryside, or militia from a village, among other groupings. Some Dracons can be found with tamed creatures, which are often kept as trained guards, pets, or are else under control by magic.

<!-repeat as necessary - REMOVE THIS LINE->